There can be no doubt that sightings of mysterious creatures can quite often run off the rails, careening  from the strange to lodge themselves firmly into a domain of utter bizarreness and absurdity, defying easy categorization and provoking quite a bit of head scratching. Certainly residing in this fringe realm of surreal weirdness are the cases that have sporadically come in of what can only be described as living amorphous blobs, and here are some of the strangest.

One very weird encounter with some sort of animated blob was covered in the book Strange World, by Frank Edwards, and allegedly occurred in Philadelphia, Pennsylvania in September of 1950, as well as being notable for having been experienced by a total of four veteran police officers. The initial witnesses, officers Joe Keenan and John Collins, were on patrol one evening when as they rounded a corner on a quiet street they were met with the peculiar sight of some sort of globular mass that glittered in their headlights and seemed to be heaving itself across the road towards a nearby field. The bewildered officers stopped their patrol car and went to investigate, finding a large mass of what appeared to be a purple jelly-like substance about 6 feet across and 1 foot thick, which pulsated, quivered, vibrated, and glistened under their flashlights. 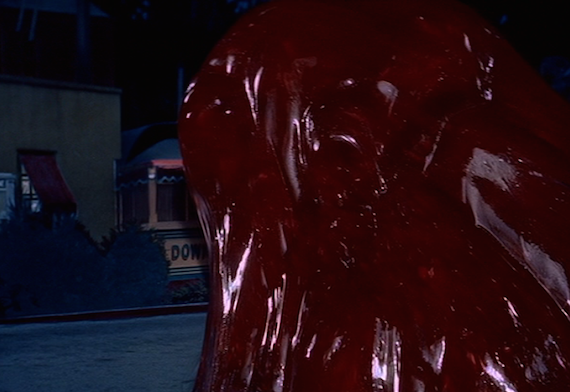 Strangely enough, the thing was reported as emitting some sort of faint dancing glow when the flashlights were turned off, as if it were bioluminescent. Considering its movements and that it even seemed to have a thick, pulsing “lip” attached to it, the officers were under the impression that this was some sort of living thing, although of what it could possibly be they had no idea. As the globular mass oozed along the two puzzled officers called in for backup, which arrived in the form of officers James Cooper and Sergeant Joe Cook, who also witnessed the unearthly sight.

At some point the four of them decided to try and lift the thing, perhaps a rather inadvisable thing to try and do considering they knew nothing of what they were dealing with, but nevertheless they purportedly surrounded the thing and began to heave it up. Much to their surprise, rather than being solid, the thing seemed to dissolve in their hands as they touched it, leaving behind globules of some sort of “odorless scum” on their skin. It is unclear if their touch had had some negative effect on the creature, but it was then that the this entire bizarre purple blob began to evaporate right before their eyes until there was nothing left but a damp patch of ground. Unfortunately they either did not think of or did not have the courage to take a sample of the thing at any point, so we are merely left with this very bizarre tale.

I recently covered one of the weirder and more violent of the blob reports which also happened in the 1950s here in another article, but for those who did not read it it involves some decidedly aggressive gelatinous beings that seem to have been aliens and I will tell the account again here. The late author Brad Steiger covered in his book Strangers from the Skies the case of Hans Gustafsson and 30 year-old Stig Rydberg, who on December 20, 1958 were were on their way along Route 45 from Höganäs to Heisenberg in Sweden in the early morning hours along a foggy road that had such poor visibility that the two friends decided to pull over. As they walked about outside the vehicle they soon noticed through the haze that there was some sort of glow emanating from the surrounding forest nearby. 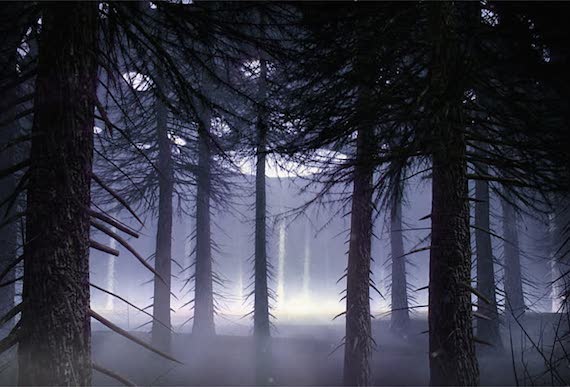 The two decided to hike off into the darkened, glow frosted trees to try and see where the light was coming from, and after penetrating around 150 feet into the woods they allegedly came across the source of the glow, which proved to be far more bizarre than they had anticipated. There before them was a disc-like object resting on two legs around two feet long, the whole of which cast a scintillating glow of ever-changing colors. Even odder than the sight of this apparent flying saucer was what could be seen cavorting about the vicinity, which were 3-foot long, limbless, faceless amorphous blobs that Rydberg would describe as being like “globs of animated jelly” that levitated over the ground.

Things got rather tense very quickly when these unusual entities suddenly surrounded the two puzzled men and purportedly began to engulf their limbs within their throbbing masses, described as feeling like “magnetic dough,” while at the same time exuding a terrible stench like “ether and burnt sausage.” It seemed as if the blob-like creatures were trying to drag the increasingly terrified witnesses towards the glimmering disc, and no matter how hard the two witnesses fought back and struggled it did little good.

By chance, Rydberg finally managed to tear himself free and run back towards their car with the alien blobs in hot pursuit. When he reached the vehicle he leaned heavily on the car’s horn, piercing the night with a wall of noise in an effort to draw anyone’s attention to their plight, but which also seemed to have the effect of startling the creatures enough to let go of Gustafsson. The blobs then huddled under their craft, filed inside it, and shot off away into the night sky, leaving behind a screeching whistling blare, that nauseating stink, and two very shaken men who found that they were covered in strange bruises and cuts. 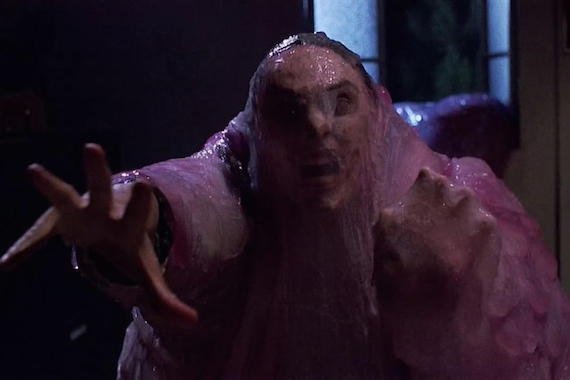 Gustafsson and Rydberg perhaps understandably kept the story to themselves for some time, but when it finally came out it became a minor sensation in Sweden. The two witnesses were also interviewed by police, and although the story was without a doubt off-the-wall, they could find no sign of any hoaxing going on, and even when the two were secretly monitored when they thought they were alone, they did not let on that there was any lying or trickery going on. Gustafsson and Rydberg were also found to be in fine physical and psychological health, and in the end, police concluded that the men really seemed to have been traumatized by what they at least truly believed they had seen, whatever that was. It is difficult to ascertain just what it was that these two men saw, or at least thought they saw, and with no other accounts anywhere near it we will probably never know.

In the 1960s we have yet another report of a living blob from the state of New York. In 1962 a rather strange report came in from a 10-year-old boy named Bruce Hallenbeck in Kinderhook, New York, who claimed to have been out with his cousin in some nearby woods when they suddenly were startled by a high-pitched whistling noise reverberating around them. When they looked around to see what had caused the strange noise, Hallenbeck allegedly saw a white, blob-like creature hiding behind a nearby tree. Although it seemed to be looking at them there were no discernible facial features, and the creature was so unsettling that the boys perhaps wisely got out of there as fast as they could. Interestingly, Hallenbeck would in later years become a paranormal researcher and mention the experience in his book Monsters of the Northwoods.

This would apparently not be the last of the mysterious white blob, as another report of possibly the very same thing came in from the area in 1964. The unidentified witness would claim that he had been out hiking in the same area when he noticed a large white blob floating down a hill, seemingly rather alarmingly coming right towards him. He ran away as fast as he could and had a friend return with him to the scene to investigate, this time clutching a shovel and pitchfork as weapons against the possibly aggressive intruder. They soon saw what they had come for, and witnessed the shapeless mass of white floating and darting about through the trees. The sight of this unnatural entity was apparently so unnerving that they decided not to confront it in any way, instead running back to town with an amazing story to tell. 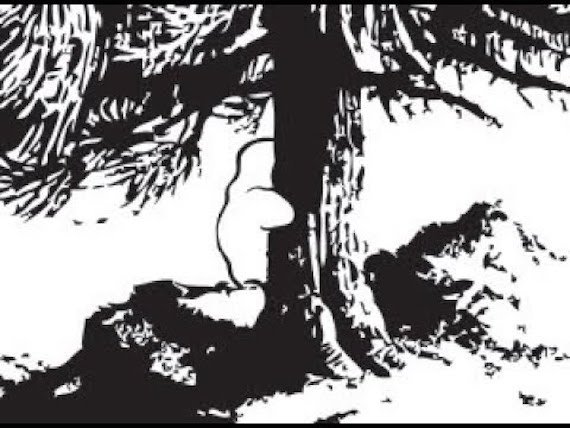 Another peculiar sighting that may or may not be connected to the “Kinderhook Blob” was made a few years later by 14-year-old witnesses Barry Scott and Russell Lee. The two allegedly were out camping in a tent when they heard something outside and looked to see what at first seemed to be an indistinct white globular object floating through the trees. However, unlike in the other cases this time the thing began to congeal into an identifiable shape, although what that was depends on who you ask, as one of the witnesses said it looked like a “bell-shaped” white entity and the other described it as the actual Virgin Mary. Weird either way, and whatever it was soon dissolved away into the forest. What did they see and was it in any way connected to the other two reports? No one knows, and the blob of Kinderhook remains a mystery.

More recently is a report from ThoughtCo. by a witness called “Adam G,” who claims to have had a very weird encounter in the summer of 1995 when he was 9 years old. He had been out on a family trip to the beach in Florida and the day was mostly an uneventful one full of fun in the sun, that is until one of the beachgoers apparently excitedly pointed towards an empty area of the beach and exclaimed “What is that?!” The witness would say of what happened next:

We all got up to get a better look, very quickly forming a crowd around it. If I had to describe the creature we saw in one word, that word would be "cartoonish." I will never forget what it looked like. It was green and looked like a ball of slime about the size of a basketball. It had tentacles resting on the ground around it with two longer tail-like tentacles sticking out of its back. The thing that was the most bizarre and made it look cartoonish were its eyes, which were on stalks that stood about a foot off its body. The eyes looked creepily human and just looked at us in an almost disinterested way. The other strange thing about it was its mouth, which never seemed to close, and where you'd expect teeth were tooth-shaped fleshy protrusions. No one, not even the creature, seemed scared, and after a while it lazily slithered back into the ocean. There were roughly 10 witnesses to this thing, and we all spent most of our time talking about what it must have been. One idea was that it was a parasite organism for a much larger creature, one also possibly never identified.

What in the world was this thing? What were any of these bizarre entities in the reports that we looked at? Are these something cryptozoological in nature? Are they aliens, ghosts, or some form of inter-dimensional beings? It is absolutely impossible to know, and here we have very strange blob-like entities lurking on the very fringes of the weird, impossible to really classify or categorize and sure to remain enigmas and almost absurd reports that baffle and entertain.