Perhaps the most famous and iconic example of any cryptid is Bigfoot, also called the Sasquatch. Yet when it comes to hairy humanoids they don't seem to be the only game in town. For decades there have been sighted strange, ape-like creatures very different from their Bigfoot brethren and more animalistic, which stalk the wilds all over the United States and have remained unexplained.

The creatures that have come to be known as Devil Monkeys are generally much quite different from typical Sasquatch, to the point that these creatures are considered to be some other type of primate entirely. The creature is usually said to typically stand between 3 to 5 feet in height, and is covered with reddish, dark brown, or black shaggy hair that is noticeably thicker around the neck and shoulders. Depending on the report the creature can be tailless or conversely have a prominent bushy tail. The general shape is more like an ape or other large primate than the Sasquatch’s more human-type build, and indeed Devil Monkeys are often described as moving about on all fours rather than biped ally, although they are also said to have powerful legs that enable them to hop about reminiscent of a kangaroo, able to make amazing leaps of distances of up to 20 feet or more.

The hands are tipped with wicked claws and the face is typically reported as being muzzled and dog-like or similar to that of a baboon, with a large mouth that is said to hold an imposing array of sharp teeth and oversized canines. Devil Monkeys are most often claimed as being able to produce a variety of very loud whoops, whistles, wails, screams, barks, and various other vocalizations, and are rather known for being extremely aggressive, attacking with little or no provocation. 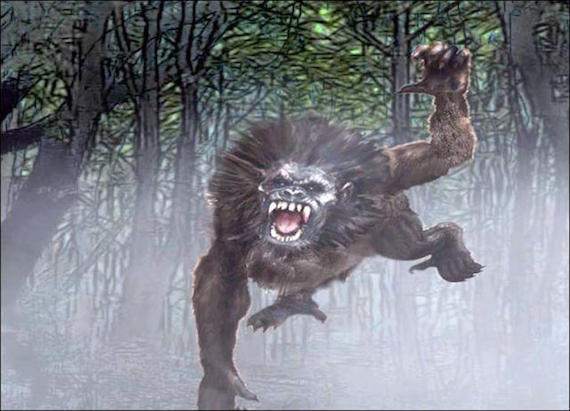 The sightings that began the whole tale of these bizarre Devil Monkeys allegedly occurred in the area South Pittsburgh, Tennessee, in 1934. In this year there was a spate of reports by witnesses claiming that they had seen baboon-like creatures leaping, bounding, and dashing across fields and roads with great speed. At the time is was speculated that people may have been seeing escaped kangaroos, since they were apparently very good jumpers, but since the reports dried up as suddenly as they started no one knows for sure.

While this is all intriguing, the sighting that really put Devil Monkeys on the map didn’t happen until 1959, when a couple by the name of Boyd were driving along a dark and secluded rural road near Saltville, Virginia, along with their daughter, Pauline. At some point during their drive, the monotony of the trees passing by was interrupted by an ape-like beast that barreled out of the wilderness to chase and attack the car without any discernible provocation. Pauline claimed to have gotten a good look at the aggressive creature, saying it looked like a monkey and that “It had light, taffy colored hair, with a white blaze down its neck and underbelly… it stood on two, large well-muscled back legs and had shorter front legs or arms.” Whatever it was apparently left deep scratches and gouges in the vehicle, although none of the occupants were harmed.

Just a few days after this rather frightening incident two nurses were allegedly driving along in the same area near Saltville when they were also attacked by the same creature or something very similar to it. According to the witnesses it viciously clawed and tore at their convertible, actually managing to rip the top clear off the vehicle. They said that they had then begun to scream wildly and that this had frightened the ape-like thing away.

Incidents with these strange creatures continued on into the 1970s, when something like a large, bushy tailed ape with a face like a dog was reported as slaughtering and maiming cattle in Albany, Kentucky. So many sightings of this mysterious beast came in that famed cryptozoologist Loren Coleman actually travelled to the area in 1973 to investigate. While Coleman found no hard evidence of the alleged creature, he came away fairly convinced that something weird was going on, saying, “I interviewed the people, who were very sincere. In the whole context of devil monkey reports, it seemed extremely sincere. You have these reports of hairy, monkey-like creatures with tails, very different from Bigfoot.” Something very similar was reported from the backwater areas of rural Georgia in 1979, when a simian entity was sighted several times that was described as having a muzzled snout and a tail “like a beaver’s, but it’s bushy.”

These are far from the last sightings of the Devil Monkey, and such reports have continued on well into later years. In 1994 a woman in Roanoke, Virginia, was driving down a dark road at around 2 AM when she was confronted by a very scary creature like "a cross between an ape and a wolf," which materialized out of the night to leap right in front of her. The woman would say it was around 6 feet tall, that it had a wiry and thin frame and cat-like legs, and that it was covered in sleek dark fur. US Game & Wildlife officials dismissed the report as being merely a wolf or feral dog.

Interestingly, also in 1996 a woman by the name of Barbara Mullins was driving along Louisiana’s Highway 12 when she purportedly noticed a large mass sprawled out on the side of the road. She pulled her vehicle over and got out to investigate, but rather than the dead dog she had been expecting to see, she saw that it was in fact a creature similar in appearance to a baboon, which was about the size of a large dog and had thick shaggy hair, pointed ears, and ape-like arms and legs. Mullins managed to get photographs of the mysterious carcass, which have gone on to stir much debate and controversy as to what they actually show. Do the photos show a dead Devil Monkey, a dog, or what? It remains unknown.

In 1997 a simian creature around 5 feet tall, with pointy ears, a short tail, disproportionately long arms, and a face like a baboon was seen in Dunkinsville, Ohio. Yet another incident happened as recently as 2001, in Danville, New Hampshire, where residents were alarmed by unearthly howls and shrieks in the middle of the night unlike those of any known animal in the area. People who actually claimed to have seen the creature responsible for the eerie sounds reported that it was a large primate of some sort with a dog-like muzzle, prominent claws, sharp teeth, and a dark reddish brown coat of shaggy hair. Danville’s own fire chief even apparently saw the beast, and the creature was purportedly seen at least 9 times over a 2-week period, to the point that it caused a minor mass hysteria. Then the reports just stopped.

Even the bustling city of Chicago, Illinois has had its own sighting in January of 2006. On January 12, 2006, one unnamed witness claimed that he had come home to find a “devil-like creature” attacking his family pet, a labrador dog. It was described as “an unusual combination of a monkey, wolf, and devil with long fangs, a monkey-like tail and extremely bright glowing eyes,” and he even claimed to have photographed the incident. Indeed, it was apparently the light of the camera flash that scared the thing off, although the results have left much to be desired, and have proven to be controversial to say the least, with many crying hoax. 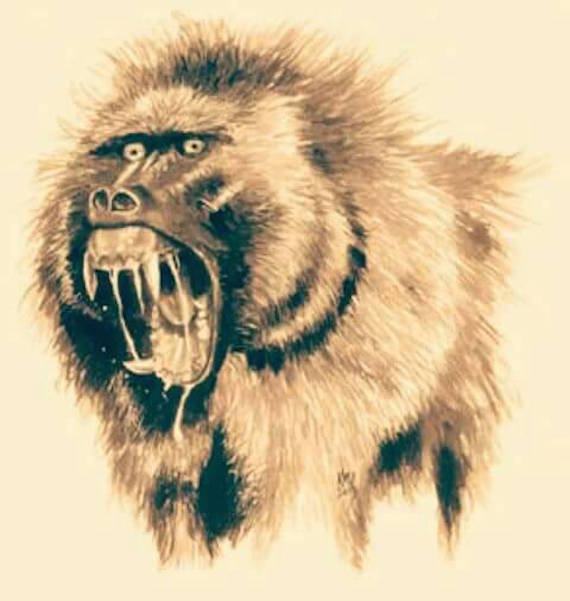 In 2009 we have a report from an unnamed wildlife biologist who claimed to have seen a Devil Monkey in rural Louisiana. The witness said that he had seen the creature running through an open field, and that he had at first taken it to be a dog, but he would soon realize that he was wrong. The witness would explain of his encounter:

At first I guess I kinda thought it may be a dog, but as it got closer I realized I was wrong. The thing, whatever it was, ran on all fours to a spot in the fence were the trees were about thirty feet apart, and leapt over the five-foot fence in one hop. Once on my side of the fence, this thing stood up on two legs! It was only thirty feet from me at that point, and I got a really good look at it. It was about four feet tall, maybe a little bigger. It had really big, yellowish eyes, large pointed ears, and a sparse coat of shaggy fur. It stood on its tiptoes, and had a long, somewhat bushy tail, kinda like a squirrel, but not nearly as thickly furred. The snout was very cat-like… I was close enough to make out thick hairs on the face. I’m inclined to believe that these may have been whiskers. Once it stood, it kept its arms to its sides, much like a human, but slightly bent at the elbows. Its hands had identifiable fingers with noticeable claws. I know I saw something that day that I could not explain, and I am hard pressed to ask others to blindly accept what I say at face value. I am not trying to convince anyone, but rather find answers for myself… in any case, after considering the evidence, I firmly believe that what I saw was indeed a so-called devil monkey.

Of course as usual there have been plenty of ideas of what the Devil Monkeys could be. For some they are an undiscovered species of primate inhabiting the isolated wildernesses of America. For others they are just misidentified dogs, wolves, coyotes, or even escaped kangaroos. Then there is the idea that these sightings could be the result of exotic escaped monkeys or apes. More out in the realm of the bizarre is that they are mutated experiments, aliens, the Chupacabras, or inter-dimensional beasts. Or maybe this is just all a hoax and an urban legend in the end. No one really knows for sure, and Devil Monkey reports still sporadically come in. Whatever they are, it certainly shows that Bigfoot is not the only mysterious ape-like creature to call North America home.

More on UFOs and Secret Balloons