The Mysterious Gnomes of Wollaton Park

To many it may seem as though things such as fairies and gnomes must surely stand firmly entrenched in the realm of fairy tales and fiction. After all, how could such odd beings ever possibly be real? To think so would be absurd, wouldn't it? Yet, there are countless reports from all over the world from people who describe seeing what can only be described as the typical storybook version of these beings, complete with leggings, beards, and pointy hats, and one of the more widely known such modern day accounts was made at a quaint little park in England.

Truly one of the odder cases of gnome encounters occurred in 1979 at the quiet, verdant Wollaton park, Nottingham, England, known for its expanses of tree-dotted green and the magnificent Wollaton Hall, which was used in the film The Dark Knight Rises. It was here that on October 29, 1979, a group of six schoolchildren by the names of Angie, her brother Glen, her sister Julie, as well as Andrew and Rosie who were brother and sister, and a boy named Patrick, all of whom ranged in age from 8 to 10 years old and were out wandering around in the late afternoon hours, as the sun began to dim as the day began to come to a close. Realizing that they soon had to get on their way home, they nevertheless had their curiosity piqued when they reportedly came to a fenced off area of murky, overgrown swampland near the lake that was closed to the public. Being kids, the fence and the sign warning people to keep out might as well have been an open invitation to come on in, and the children decided to sneak in to poke around this forbidden treasure.

Upon entering, the children would claim that they soon heard the chime of a bell, after which they had come across a group of dozens of tiny little men about half their own height, who had deeply wrinkled faces and sported lush white beards with red tips. On their heads were strange little pointed caps described as looking sort of like nightcaps with bobbles on the ends, and their clothing was composed of yellow or green tights and blue shirts. Strangest of all is that the children claimed the curious little men drove about in miniature, bubble-like cars that had no steering wheels, bells instead of horns, and which produced no engine sounds, yet sped around at high speeds and could easily jump over and evade obstacles. According to the children, there were about 30 of these unusual mini-vehicles, with two of the gnomes riding in each, laughing joyously and gleefully whizzing about, and even on occasion playfully chasing or making passes at the startled witnesses. One of the witnesses would describe them:

We heard this little tinkly bell. We started running and these little men came out of the bushes. There were about 60 of them in 30 cars like bubblecars. They were half my size and looked old.They had greenish faces with crinkles in them and long white beards with a bit of red on the end. They were laughing in a funny way and driving over swamps near the lake. We were frightened and ran to the gate. I don't think they liked the lights outside because they didn't follow us to the street.

The children claimed that they had spent around 15 minutes watching these bizarre figures cavort and drive about the swamp before they finally left for home with the coming of night. The entities were described as being quite cheerful, playful, and not threatening or aggressive in the slightest. When they told adults of what they had seen no one would believe them, yet they adamantly insisted that it had all been real. The school headmaster would go on to extensively question the kids on what they had seen, and came to the conclusion that they at least believed they were telling the truth. He would later say of a recording he made of their conversations:

I think the tape reveals the wide measure of corroboration between the children, as well as the fluency with which they were able to describe the events. I remain skeptical as to the explanation of what they saw, but I am also convinced that the children were describing a real occurrence.

Despite wide-ranging skepticism, the tale of the Wollaton Fairies made headlines in the news at the time, and oddly more people came forward with their own sightings of the same thing in the area. One such sighting was written of in Janet Bord’s book Fairies: Real Encounters With Little People, which she writes of thus:

Over six years before the Wollaton fairies were reported in the media, I had corresponded with Marina Fry of Cornwall, who wrote to me giving details of her own fairy sighting when she was nearly four years old, around 1940. One night she and her older sisters, all sleeping in one bedroom, awoke to hear a buzzing noise (one sister said ‘music and bells’). Looking out of the window they saw a little man in a tiny red car driving around in circles’. He was about 18 inches tall and had a white beard and a ‘droopy pointed hat'...he just disappeared after a while.

Author and researcher and former Secretary of the Nottingham-based “Fairy Investigation Society,” Marjorie Johnson, also confirmed that there had been various other sightings of bubble-car driving gnomes in the Wollaton Park area, in particular near the lake, and wrote of these in her book Seeing Fairies. One sighting was made by a Mrs C George, who sighted the gnomes playing about by the park gates with their cars parked to the side. In still another, a Mrs. Brown claimed to have been guided around the park by the gnomes in a sort of game, wherein they would reward her with a feather at each checkpoint they reached. In yet another encounter a Jean Dixon claimed that she had witnessed gnomes roaming around the park, who seemed eager to show her around their abode. Interestingly, Johnson had her own sighting of gnomes in the early 1900s, when she claims that she spied several tiny men about 3 feet in height frolicking about dressed as policemen.

As recently as 2016 there have been gnome phenomena in the park, such as news reports in the Park Herald that railways in the area were being haunted by the miniature humanoids to the point that interrupted services on trains running from Nottingham station to London St Pancras was being blamed on the little menaces. On witness named Daniel Sedgwick saw a gnome lurking around a train embankment, and said of it:

All of a sudden I caught a glimpse of 5 small hat wearing creatures tearing down the side of the embankment just after passing through Attenborough. 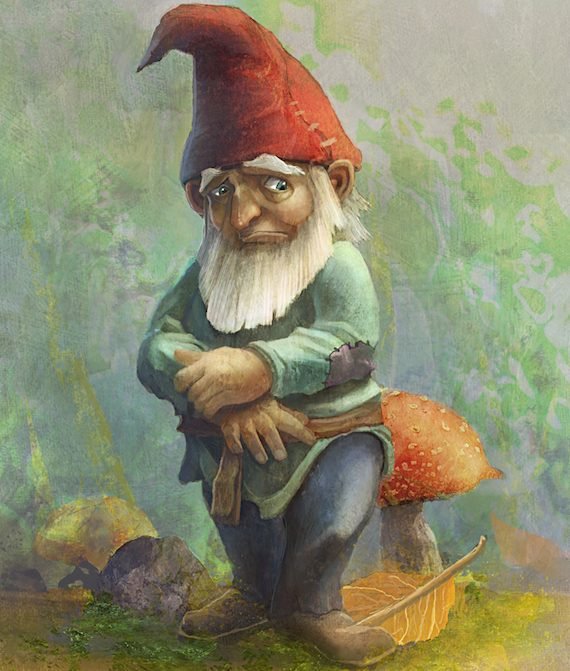 As to whether these creatures pose any threat to people in the area, a professor of gnomic studies named Professor Gregory Landau put people’s minds at ease, telling the Park Herald:

Gnomes are traditionally benign in attitude and general behavior, to be honest they consider courtesy and discretion to be amongst the highest attributes of their social code. There are handful of unconfirmed writings pertaining to a certain sub-order, castigated from gnomic society, who have a renown for mischief and borderline thuggery. As for gnomes attacking people, there have never been any documented occurrences.

In recent times there has been a resurgence in interest in the case, when writer and historian Dr. Simon Young expressed interest in reinvigorating the case by bringing together the witnesses again. Young believes that this is a singularly unique case in that so many witnesses saw so many of the creatures, all while their reports remain remarkably consistent across the board. Young has said of this:

The experience was interesting in several respects. There are many instances of children coming face-to-face with fairies, but I know of none where six saw the fey together. So many Fortean experiences depend on a single shaky witness or poor chain of custody for the evidence: this is not the case with Wollaton.

What is it these people were seeing in Wollaton Park? Is this just overactive imaginations or is there some high strangeness going on here? If they are indeed real, then what are they, and what is it that draws these entities to this particular place? Whatever the case may be, the Wollaton gnomes case, with their odd little vehicles, is certainly one of the weirder mass sightings of gnomes out there.

A Warning For Those Who Want Aliens To Land