Are Aliens Really What They Seem To Be?

Just recently, I wrote an article here at Mysterious Universe on the matter of sex with robots. The article was prompted by a long-lost (or, I assumed it was long-lost) interview I did years ago with the late Mac Tonnies. Well, I have now found another interview I did with Tonnies, but on a completely different issue. This one - specifically the original audio version, which finally surfaces again - was undertaken the year before he died. The subject: Tonnies' theories which led to the 2010 publication of his book, The Cryptoterrestrials. Tonnies suggested that alien abductions, the abilities of the assumed ETs to breathe our air, and their concerns about nuclear war were all due to one fact: the aliens were from right here. And not from faraway worlds.

Tonnies told me a great deal in the interview (portions of which he related to me, verbatim, down the phone direct from his original Word document, parts of which were taken from his blogging days): "After devouring countless books on the UFO controversy and the paranormal, I began to acknowledge that the extraterrestrial hypothesis suffered some tantalizing flaws. In short, the ‘aliens’ seemed more like surreal caricatures of ourselves than beings possessing the god-like technology one might plausibly expect from interstellar visitors. Like [UFO researcher] Jacques Vallee, I came to the realization that the extraterrestrial hypothesis isn’t strange enough to encompass the entirety of occupant cases. But if we’re dealing with humanoid beings that evolved here on earth, some of the problems vanish."

Tonnies continued: “I envision the cryptoterrestrials engaged in a process of subterfuge, bending our belief systems to their own ends. And I suggest that this has been occurring, in form or another, for an extraordinarily long time. I think there’s a good deal of folkloric and mythological evidence pointing in this direction, and I find it most interesting that so many descriptions of ostensible ‘aliens’ seem to reflect staged events designed to misdirect witnesses and muddle their perceptions." 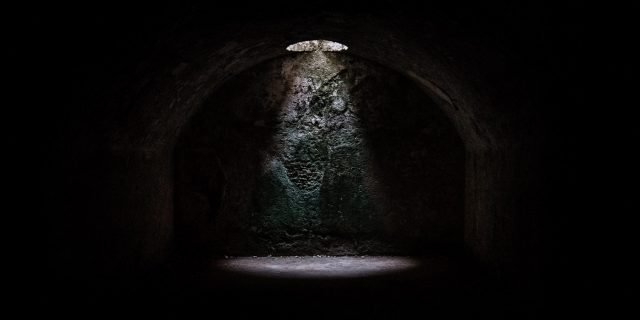 During the course of his research into the Cryptoterrestrial theory, Tonnies spent a great deal of time addressing the matter of alien abductions. For those who aren’t fully aware of the nature of the phenomenon, a bit of background data is required. Regardless of whether people believe or don’t believe in the reality of the alien abduction phenomenon, there is no doubt that the vast majority of people have heard of it. It was, however, a phenomenon that was pretty much unknown until September 19, 1961. Yes, there were a few, earlier cases, but, for the most part, they were not publicized until after September 19. So, what, exactly is so significant about that particular date? The answer is that it was the date of a now-historic UFO event which occurred to a married couple from New Hampshire. They were Betty and Barney Hill.

Such was the phenomenal reaction to the story of Betty and Barney Hill, it prompted author John Fuller to write a book on the subject, titled The Interrupted Journey – an appropriate title, indeed – and which was published in 1966. Since then, the alien abduction phenomenon has grown and grown and spread like wildfire. We may never know for sure how many people believe they may have been kidnapped and experimented on by black-eyed, dwarfish beings from far away galaxies. After all, not everyone wants publicity – and particularly so not publicity of a very controversial type. In that sense, there may be as many silent abductees as there are publicly visible ones.

To demonstrate the sheer level of experiences on record, it is worth noting that after Whitley Strieber’s 1987 alien abduction-themed book, Communion, was published Strieber and his late wife, Anne received letters from the public in no less than six figures. Other books, such as Budd Hopkins’ Missing Time and Dr. John Mack’s Passport to the Cosmos, have added to the controversy and given it more publicity. But, what if there was a far more down to earth explanation for the alien abduction phenomenon? That question brings us back to Mac Tonnies:

"I regard the alleged ‘hybridization program’ with skepticism. How sure are we that these interlopers are extraterrestrial? It seems more sensible to assume that the so-called aliens are human, at least in some respects. Indeed, descriptions of intercourse with aliens fly in the face of exobiological thought. If the cryptoterrestrial population is genetically impoverished, as I assume it is, then it might rely on a harvest of human genes to augment its dwindling gene-pool. It would be more advantageous to have us believe we’re dealing with omnipotent extraterrestrials rather than a fallible sister species. The ET-UFO mythos may be due, in part, to a long-running and most successful disinformation campaign."

Tonnies then turned his attention to the claims of Antonio Villas Boas, a Brazilian lawyer who claimed that, in 1957, as a young man and while living on his family’s farm at the time, he was abducted onto a UFO and had sex with a surprisingly hot-looking space-babe. Tonnies said of Villas-Boas’ story:

“After intercourse, the big-eyed succubus that seduced Antonio Villas Boas pointed skyward, implying a cosmic origin. But the mere fact that she appeared thoroughly female, and, moreover, attractive, belies an unearthly explanation. Further, one could argue that the clinical environment he encountered aboard the landed ‘spacecraft’ was deliberately engineered to reinforce his conviction that he was dealing with extraterrestrials. If cryptoterrestrials are using humans to improve their genetic stock, it stands to reason they’ve seen at least a few of our saucer movies. As consummate anthropologists, they likely know what we expect of ‘real’ extraterrestrials and can satisfy our preconceptions with a magician’s skill. Their desire for our continued survival, if only for the sake of our genetic material, may have played a substantial role in helping us to avoid extinction during the Cold War, when the UFO phenomenon evolved in our skies; much to the consternation of officialdom.

“Commentators regularly assume that all the Contactees [a term for those who claimed encounters with human-like aliens, chiefly in the 1950s] were lying or else delusional. But if we’re experiencing a staged reality, some of the beings encountered by the Contactees might have been real and the common messages of universal brotherhood could have been a sincere attempt to curb our destructive tendencies. The extraterrestrial guise would have served as a prudent disguise, neatly misdirecting our attention and leading us to ask the wrong questions; which we’re still asking with no substantial results." 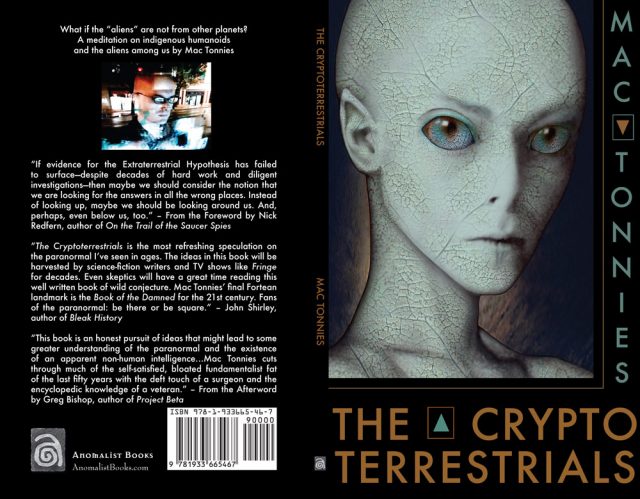 Tonnies told me, when word got out that he was working on his book, The Cryptoterrestrials: "The cryptoterrestrial theory has met with mixed reactions. Some seem to think that I’m onto something. Most UFO researchers are, at best, extremely skeptical. Others think I’m parroting John Keel’s ‘superspectrum’ [Keel was the author of the acclaimed 1975 book, The Mothman Prophecies], a variation on the ‘parallel worlds’ theme that in turn shares memes with Jacques Vallee’s ‘multiverse.’ Both ideas suggest that we somehow occupy dimensional space with our ‘alien’ visitors, doing away with the need for extraterrestrial spacecraft while helping explain the sense of absurdity that accompanies many UFO and occupant sightings. Keel and Vallee have both ventured essentially ‘occult’ ideas in cosmological terms; both the ‘superspectrum’ and the ‘multiverse’ require a revision of our understanding of the way reality itself works. But the cryptoterrestrial hypothesis is grounded in a more familiar context."

He explained: “I’m not suggesting unseen dimensions or the need for ufonauts to ‘downshift’ to our level of consciousness. Rather, I’m asking if it’s feasible that the alleged aliens that occupy historical and contemporary mythology are flesh-and-blood human-like creatures that live right here on Earth. Not another version of Earth in some parallel Cosmos, but on Earth. While I can’t automatically exclude the UFO phenomenon’s ‘paranormal’ aspects, I can attempt to explain them in technological terms. For example, I see no damning theoretical reason why ‘telepathy’ and ‘dematerialization’ can’t ultimately be explained by appealing to cybernetics, nano-technology and other fields generally excluded from ufological discourse.”

Finally, there was this from Tonnies: "The cryptoterrestrial hypothesis manages to alienate champions of the extraterrestrial hypothesis and those who support a more esoteric, ‘inter-dimensional’ explanation. It offers no clear-cut reconciliation. It does, however, wield explanatory potential lacking in both camps."

Personally, I thought that Tonnies' theory  was well-argued (he admitted, however, that it was just his"meditation on" the scenario). But, the idea of some kind of ancient race hiding from us, living deep underground, and passing themselves off as ETs, stretches matters to the absolute extreme. Could it really be??? I say "No."