If there’s something strange in your neighborhood, who you gonna call?

Well, if it’s ghosts, you call the Ghostbusters. If it’s anything else, the police would be a better choice. But … what if YOU’RE the police and you’ve got ghosts in your station house? That’s the situation in an Indian town known for haunted public places where the police are so terrified of what they’ve seen at the station, they abandon it to the ghost every night at 11 pm. Is this a case of evil spirits or just a great way to get some time off?

“Nothing appears fine here. We feel terrified all the time out of sudden fear.”

That would make a terrible opening line for a movie theme song, but it’s the actual quote from the Bihar Times of police sub-inspector S Baske describing the poltergeist problems at the Jugsalai police station in Jamshedpur, a town in the Jharkhand state in eastern India. The ghosts are said to manifest in multiple manners, starting with eerie sounds that begin at 11 pm and increase to haunting heights just past midnight. Even if the police had the number of the nearest ghostbusters or fellow police station, it would do them no good.

“We have been repairing the phone lines on a daily basis, but strangely they stop working by evening. This is an everyday problem.”

One suspected cause for the alleged ghostly activities comes from locals who report that the police station was built upon a shmashāna – a Hindu cremation ground where the dead are brought to be burned on a funeral pyre. Shmashāna are traditionally located on the shores of a river to facilitate disposal of the cremation ashes and this one is near the banks of the Subarnarekha, a 245 mile-long river that is haunted by the manmade ghosts of pollution caused by uranium and copper mining operations. 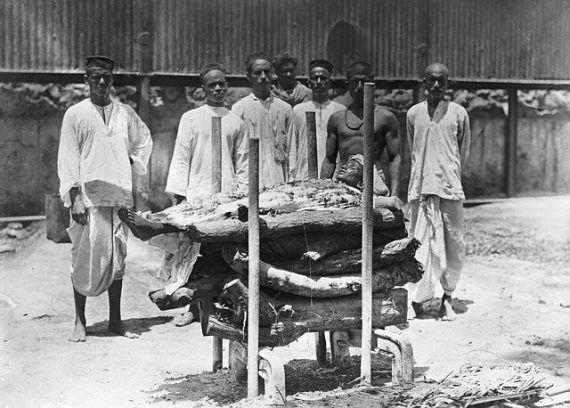 As expected, shmashāna are believed to be haunted by ghosts of the created dead, deities and evil spirits. Women are banned from them and men avoid them after dark. This being India, they are traditionally tended to by the Dom or Domba, an ethnic group considered to be lower class, and Chandalas, a Hindu lower caste traditionally considered to be untouchable.

Gee, if only the police could get past this horrible caste system and work with the Doms and Chandalas to help the spirits move on to the next world.

“None likes to stay at the police station at night and it is totally deserted by 11 PM every day.”

Perhaps the police feel trying to remove the spirits is futile because this is Jharkhand, home of the infamous haunted Begunkodar railway station, where in 1967 a station employee reported seeing “a ghost dressed in white clothes walking on the tracks in the dead of night” who was believed to be the spirit of a woman killed in a railway accident (of course). It was said that no one believed the worker … until the next day when he died mysteriously and many believed he was killed by the ghost. There are many variations on the story and the consequences – people and trains began avoiding the once-busy station until it was forced to shut down. It finally reopened in 2009 but trains and passengers still avoid it after 10 pm. One theory – not surprising in India – is that passengers and train employees just don’t like the neighborhood.

Then there’s Jharkhand’s Ranchi Jamshedpur National Highway 33 which has the highest fatality rate of any road in the state. Why?

"At night a white dressed tall lady could be seen standing by the highway or crossing it. It looks as though she is waiting for someone."

Priests who run the temples on the road say it’s an evil spirit and collect donations in return for prayers of safe passage (of course) while the police blame the accidents on the road being too narrow and having too many hairpin turns. There’s no word on whether these police work past 11 pm when the ghost is generally seen.

Ghosts of cremated bodies or accident victims? Folktales told to avoid work or walking at night through less-than-desirable neighborhoods?

The Mysterious Dark Watchers of California