Up in the cold, northern reaches of Japan is the nation’s second largest island, Hokkaido. Known for its spectacular natural vistas and picturesque scenery, it is perhaps not a place one would at first associate in any way with haunted locales and ghouls and ghosts. Yet here in the rural town of Bibai, nestled among the beautiful vistas and right up against the Lake Miyajima wetland lies the creepy and enigmatic ruins of a former schoolhouse that has accrued a sinister reputation as one of the most haunted, weirdest places in Japan.

The building itself was apparently built back in 1906, and was designed in a distinctive round shape from which it earns its simple nickname “The Round Schoolhouse.” From the 1940s up until the 1970s it was used as an elementary school, after which it was closed for unknown reasons and simply left there where it stood to fall into ruin. Rather creepily, the structure seems to have been left as is, with tables and desks still set up collecting dust in the crumbling structure, all lined up as if expecting students that will never come. This would have once been a place of children playing and laughing, yet now the surrounding grounds have become a thick tangle of overgrown brush that hungrily surround the building, the playground buried in forest growth to poke forth like the skeleton of some half-buried prehistoric beast, and any road that led there was long ago devoured by the forest, making the only way to reach it on foot from the nearest road.

Dark rumors and stories sprang up almost immediately after the closing of the school, beginning with locals claiming that the woods in the vicinity were haunted by bobbing, mysterious lights and half-glimpsed shadowy figures, and the night often pierced by disembodied screams as well as other less discernible anomalous noises. Additionally, there were rumors of several children who had gone out to play in these woods to never come back. It was not long before these phenomena and rumors were linked to the abandoned former school house, and things would get spookier still.

Through the late 70s and 80s the Round Schoolhouse became a popular place to go to try and see ghosts, and by all accounts it was absolutely infested with them. Frightened trespassers to the site would come back with terrifying tales of encountering all manner of supernatural phenomena on the school grounds or within its dilapidated building, and it has steadily become increasingly well-known on into later years as an absolute hotspot for the paranormal. Paranormal investigators who have been there consistently put this location in top ten lists of Japan’s most haunted places, and there have been Japanese spirit mediums who have been so overwhelmed with negative spiritual energy here that they refuse to come back. Japanese videos on YouTube of macabre adventure seekers in the ruins have also become quite popular, whether they show anything paranormal or not, and the legend of the haunted Round Schoolhouse of Bibai has surged.

Even above and beyond talk of hauntings, more sinister rumors tell of people going off to explore the ruins only to disappear without a trace, and stories abound of abandoned cars found on the nearby road, their occupants said to have gone off towards the schoolhouse to never return. Perhaps worse yet are those said to have come back completely stark raving insane, driven over the brink of madness by whatever it was they had seen in that forsaken place. Stories of the missing or of people going mad at the Round Schoolhouse are very persistent on Japanese paranormal sites, with comments of witnesses common. 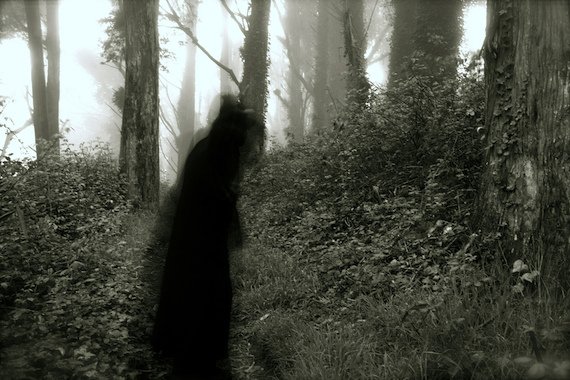 While much of the information on the Round Schoolhouse is rather ambiguous and murky as to its veracity, there have been a few accounts that I have tracked down that seem particularly interesting. By far one of the oddest reports I have seen was of a group of three curiosity seekers who one day in 1998 went off to the ruins to poke around, and seem to have gotten way more than they bargained for somewhere in the bowels of that old, darkened building. It started innocently enough, when the group of friends decided to make a trip out to the place after hearing some of the many scary stories about the place. They parked their car along the lonely road and began their trek through out the forest and its tangle of trees towards the main building.

Once there, the main witness claims that they were almost immediately overcome by a clinging, unsettling cold, and that they sensed that they were being watched from the shadows by an unseen force that seemed to creep along following them. This was followed by a series of escalating paranormal experiences, such as items being knocked over, doors slammed shut, and most frightening of all the startled shout of one of the friends when he was apparently aggressively shoved by some invisible entity. The longer they stayed, the more the intensity of these phenomena increased, until they got to the point where they had seen enough and made their way back outside. As they did, a black form allegedly congealed out of the shadows and followed them. The witness would say (translated by me):

That shadow stalked us all the way out of the building and into the woods. We couldn’t see it much as it was hiding, but we knew it was there. We could catch glimpses of it, and it made us pick up our pace. As we got closer to the car it became more visible, tangible, and more threatening. We finally got into the car and that was when something very black, large, and heavy slammed into us. It was as if a black bear had hit the car, but then it was gone without a trace, and we were alone in the forest again. 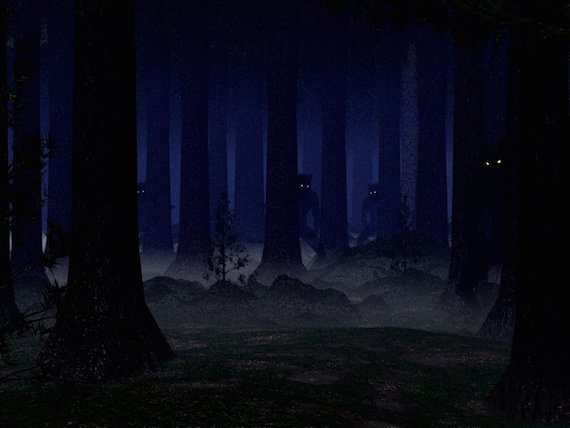 An even weirder account seems to suggest that there is some sort of vortex or inter-dimensional doorway within the Round Schoolhouse. This apparently happened as recently as 2000, and again involves a couple of amateur paranormal investigators, drawn to this location by all of the mysterious tales and creepy stories. Perhaps it was their mistake to come here in the evening hours, but whatever the reason they certainly came across something rather outlandish in that building.

Even as they made their way through the forest towards the schoolhouse they purportedly heard strange sounds coming from the trees, such as what sounded like someone banging on a tree with a stick, the sounds of someone snapping twigs, and what one of the witnesses swore was the sound of giggling. Things didn’t get any more normal when they reached their destination, and disembodied footsteps seemed to echo out all around them, but it was when they reached one particular room where things would take off into the truly bizarre. Here they came across a faintly glowing opening in the wall, which supposedly shimmered and rippled. The witness would say of what happened next (again my own translation):

We stared at this glowing patch upon the wall for several moments, and that was when something seemed to come out of it. It looked like a hunched over figure but it was impossible to see the face. Then there were others, coming out two at a time, until they were looming all around us in that dank confined space. My friend and I looked at each other and ran. He says he looked back and the glowing was gone, but those shapes. They were everywhere.

Unsettling to say the least, and it is not apparent what happened after that but they apparently made it out in one piece. One has to wonder just what these people saw. Was this some sort of portal? Was it all an illusion? Who knows? It does seem to fit into the idea floated around that this is a site that harbors some sort of doorway through dimensions, and that all of this is not a haunting, but rather a bleeding over of another realm into our reality. Indeed, the Round Schoolhouse has never had any particular tragedy or violent incident as far as anyone knows, so is this the result of something even stranger than ghosts? Or is this an urban legend orbited by creepy pasta tales and spooky stories? If you are ever in the vicinity of Bibai, Hokkaido, maybe you can go check it out for yourself, if you dare.

Monkeys in South America Have Entered the Stone Age