Here we go again. Every time something red falls from the sky, this passage from the Book of Revelations gets pulled out and talk turns to apocalypse. It’s never been a good sign – Zeus made it rain blood before a battle in Homer’s Iliad. A blood rain reportedly preceded the Black Plague in Germany. Even Charles Fort in The Book of the Damned wondered if blood rain was a sign …

“... that our whole solar system is a living thing: that showers of blood upon this earth are its internal hemorrhages.”

While colored rain is not all that uncommon and can often be explained by human inventions or interventions, it sometimes occurs in locations that makes one wonder if there might be something more going. That’s the case in Norilsk, Siberia, where a recent mysterious red rain is being blamed on many unnatural things while its “official” cause and official admonitions that it’s “nothing to worry about” are being questioned.

This is somehow going to be turned around and blamed on Trump.
— Robert (@SlytherinRob) July 5, 2018

Photographs and videos on various Russian media sites showed a parking lot in Norilsk covered in red water, cars dripping with thick red slime and people cautiously stepping in red goop. That fact that the only pictures were from this particular parking lot were one clue to the “official” solution given by the lot’s owner -- the Nadezhdinsky processing plant owned by the city’s largest employer, the Russian industrial giant Nornickel. A spokesperson said that the plant had just removed a massive amount of iron oxide (rust … what color is that?) from the factory floor and had it stored outside when a pre-storm gust of wind blew it into the air and the subsequent rain came down red. Nothing to see here … move along … don’t touch it … the Control and Analytical Department is here to carry out analysis of the collected samples.

That might be enough to allay fears if the Doldykan River running alongside the plant wasn’t already red long before the storm. In the U.S., problems like this are blamed on the previous presidential administration. According to Nikolay Utkin, director of the Polar Division of Norilsk Nickel, speaking to the Siberian Times, here it’s a little different.

"The reason why the water in the Doldykan River got the reddish-brown colour is the active melting of snow, a powerful flood, which washes off the stuff that had been gathering here for decades. Unfortunately, during the Soviet era, the environmental issues were resolved on a residual basis.” 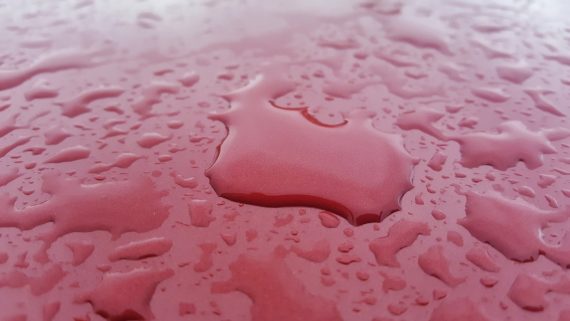 Well, not quite always. Norilsk is an unusual city. It’s a recent development (late 1920s), the world's northernmost city with more than 100,000 inhabitants, the second-largest city inside the Arctic Circle and one of only two large cities in the continuous permafrost zone. It’s covered with snow up to 270 days a year, so anything falling from the sky that’s not white is strange. That sounds like the kind of remote location where the “Soviets” conducted nefarious activities. It is also home to the northernmost Muslim mosque in the world, whose congregation seems to get along just fine with its Russian Orthodox and Ukrainian Orthodox neighbors.

Is there something more to the “blood rain” of Norilsk than the local biggest employer or government officials want residents to believe? Is it time to start treating industrial pollution as an apocalypse? Now THAT would be revelation!