New Ouija Board Study Scientifically Explains How They Move

You may think you know how the planchette (yes, that’s what the little piece of wood is called) moves around a Ouija board after two people place their fingers on it and ask a question … and you’re probably wrong. Is it possible for science to solve a spirit board? Researchers in Denmark (why do foreign countries always get the most interesting research projects?) conducted a study and found what sounds like a plausible solution to the Ouija mystery. Spirits, Satan or psyche? Place your bets now.

Marc Anderson from the School of Culture and Society at Aarhus University in Aarhus, Denmark, led the study, which was published in the current edition of Phenomenology and the Cognitive Sciences. He and his team set up a test at a paranormal conference where Ouija board sessions were popular. This was not a secret test – the 40 participants wore devices to track their eye movements as “watched” the planchette movements. Each pair participated in two tests – one traditional session when they asked the Ouija board their own question and another where they were asked to deliberately move the planchette to ‘YES’, deliberately move the planchette to ‘NO’, and deliberately use the planchette to spell ‘BALTIMORE’. (Baltimore? Ask your own Ouija to explain that one.)

The bookmaker is now closed. What do you think Anderson’s team saw when they read the eye-tracking data?

The researchers were watching for what they call the Sense of Agency (SoA) – a feeling of control over one’s surroundings. That SoA was obvious in the second test – the participants knew the word and consistently looked ahead to the next letter, indicting their brain was predicting the next move. That wasn’t the case with the traditional Ouija use … for a while. When the participants didn’t know where the planchette was going on its way to answering the question, they had much less SoA and much less eye movement. However, as a word or answer began to form, the eye movements increased, indicating that their brains were calculating and predicting potential answers and sending their eyes to potential next letters, thus subconsciously guiding their hands to glide the planchettes to them. The pair on the planchette subconciously take turns taking control as their brains feel more condfident tin their choices. 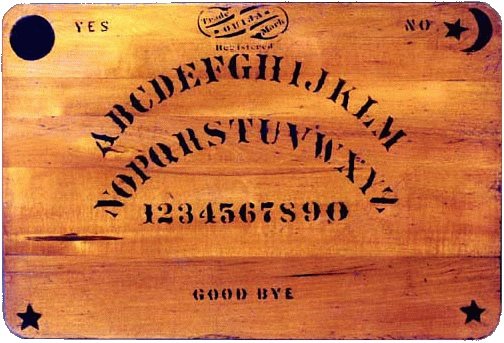 Does this mean there’s no spirit behind the Ouija board? In questionnaires filled out after the tests, participants who believed in the spiritual power of a Ouija board were more likely to say they felt the planchette moved on its own, even though their eye movements said otherwise. The study concludes:

Has science disproved the power of the Ouija board? This was just one test. Perhaps a blindfolded experiment would be more conclusive. Or would it anger the spirit and unleash the power that believers fear and warn against?

Do Magic 8-Balls have these kinds of problems?

Monsters of the Very Weird Kind