Real Lake Monsters or Creatures of the Mind?

Just a few days ago I wrote an article here at Mysterious Universe which posed a controversial question: could UFOs be Tulpas, the creations of the human mind and brought to a very strange form of life? Today, I'm going to address the matter of lake monsters possibly being Tulpas. Or, at least, some of them. Before you write the whole scenario off, consider the following, three accounts that I have used to make a case. You may well disagree with me, but let's take a look at the data.

For those who aren't familiar with the concept of the Tulpa, there's this from the "Tulpa.info" website: "A tulpa is an entity created in the mind, acting independently of, and parallel to your own consciousness. They are able to think, and have their own free will, emotions, and memories. In short, a tulpa is like a sentient person living in your head, separate from you. It’s currently unproven whether or not tulpas are truly sentient, but in this community, we treat them as such."

We'll begin by taking a trip back in time to the latter stages of the 1960s. It was  an evening in February 1968 when all hell broke loose at a body of water in Ireland. Its called Lough Nahooin. It all began at around 7:00 p.m., when a man named Stephen Coyne took a walk down to the lough. The reason, as Nessie-seeker Ted Holiday noted, was to "bring up some dry peat." Also with Coyne was his young son and the family's dog. As father and son reached the water's edge, they couldn't fail to see a dark-colored "thing" moving in the water. The dog noticed it too and began to bark.

According to Holiday: "He then saw that the object was an animal with a pole-like head and neck about nine inches to a foot in diameter. It was swimming around in various directions. From time to time it put its head underwater; two humps then came into view. Occasionally, a flat tail appeared. Once this came out near the head which argued length and a high degree of flexibility. The thing was black, slick, and hairless with a texture resembling an eel."

As the dog continued to bark, the mysterious animal swam towards it - which was not a good thing. Coyne quickly moved to protect his faithful pet and the animal retreated further into the water. Mrs. Coyne was soon on the scene too and - like her husband and son - looked on amazed at the sight before her. Eventually, and as darkness began to fall, the family decided to return to their home. They left the beast to its patrol-like activities. Both Mr. and Mrs. Coyne told Ted Holiday that the monster was around twelve-feet in length, had a noticeable neck, and a whitish mouth. The family never saw it again.

Of course, many might say that such an encounter is not unlike what one might expect to occur at Loch Ness, Scotland. Well, yes. But, there's just one problem. And, it's a big one. Loch Ness is around 22-miles long and extremely deep, and which is plenty of room for a colony of animals to live in. Lough Nahooin, though, is roughly three hundred feet by two hundred. And, it's only around twenty feet in depth. Of course, the idea that a twelve-foot-long animal could somehow live in such a small body of water, and never, ever be captured, photographed or seen by numerous people is crazy. And, there's the important matter of where it suddenly came from. In fact, the whole thing is absurd. Except for the fact that the Coyne family was highly credible and impressed Ted Holiday with what they had to say.

This absurdity of lake monsters seen in ridiculously small bodies of water is something that crops up regularly. Years ago I spoke with a man named Norman Dodd, who had a bizarre encounter with a Nessie-like thing in England's Cannock Chase woods in the summer of 1976. Dodd was parked near a pool of water - maybe twenty feet by thirty at the very most - in the vicinity of a nearby village called Slitting Mill, eating his lunch on what was a hot and sunny day. To his horror, a strange animal crawled out of the pool. Around seven feet in length, it was snake-like, but had - as Dodd described it - either "feet" or "flippers." The absurdity of him seeing the animal close to bustling villages and towns was not lost on Dodd. He found the whole thing surreal. He stared with amazement, as the animal seemed to "bask" in the sun for a while, after which it made its way back into the little pool, and with barely a splash at all.

Then, there was the matter of a strange affair that went down - also on the Cannock Chase - in early 2006. The Birmingham Post newspaper was soon on the story and published the following: "In March, 2006, ramblers reported seeing a ‘fourteen-foot snake moving through the bracken’ near to Birches Valley. They said the beast had a powerful head and ‘coloring that stood out sharply against the greens and blues of the bracken.’” 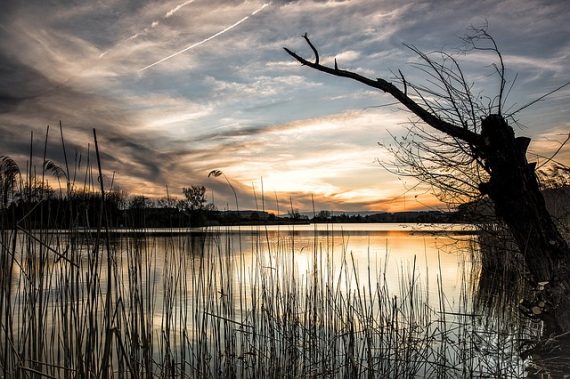 I was fortunate enough to speak with one of the witnesses, a woman who thought that the animal was far more eel-like than it was snake-like. Interestingly, for years researchers have suggested that perhaps the Nessies are massive eels, rather than surviving plesiosaurs or unknown animals. Needless to say, the idea that a fourteen-foot-long eel - or even a number of them - could live in stealth in the woods, streams and pools of the Cannock Chase is nuts. But, just like with the saga of Norman Dodd, I was impressed by the woman's words, who I met while I was back in the U.K. in 2006, for about 5 months.

All three accounts are fascinating. And they most assuredly mirror what has been reported at lakes all around the world. The problem with these cases is the size of the body of water in which the creature was seen. Or, rather, the distinct lack of size. I grew up only around seven or eight miles from the Cannock Chase and I can say for sure that the idea that Nessie-style monsters - and huge eel-like animals too - are roaming around the woods is beyond unlikely. Yet, people see them. The same goes for the incident at Lough Nahooin, Ireland in 1968.

All of which brings me back to the matter of Tulpas: could it be that a dark and mysterious body of water - even a small one - might provoke visitors to ponder on the possibility that within that same body of water lurks something mysterious and strange? And, if enough people ponder on such a scenario, then, just maybe, there's a trigger that leads to the creation of a Tulpa - perhaps only briefly, and in the form of a creature far more suited to the likes of Loch Ness, rather than Lough Nahooin and the Cannock Chase.

Just a theory? Of course! Is there any hard evidence for this theory? Nope, not even a single bit. But, consider this: thousands and thousands of people visit Loch Ness every year. They're all there to hopefully see Nessie. Maybe, when people do see Nessie, they're not seeing a living animal, but something born out of the imagination, out of a yearning to see something monstrous, and out of the minds of huge throngs of excited visitors - all focusing on a monster and nothing else.

New Evidence the Moon May Once Have Had Water and Life