At first, ancient Egyptians buried all of their dead, regardless of social status, in pits in the sand that covers much of their country. The dry air quickly and naturally preserved these bodies, giving Egyptian religions support for their beliefs in the afterlife. Unfortunately, animals had no such respect for the human dead, so the bodies were later placed in coffins or sarcophagi, which protected them from beasts but not from decomposition. Somewhere around 2800 BCE, a type of artificial mummification began to be developed and tested, using oils and minerals and techniques that have mystified and baffled those trying to duplicate them.

At a press conference in Cairo, Egypt’s Ministry of Antiquities announced that German and Egyptian archeologists led by Ramadan Badry Hussein have uncovered an ancient laboratory or workshop dating back to the Saite-Persian period (664-404 BCE) which contains fragments of mummy cartonnages (funeral masks), canopic jars (used for storing human organs removed before mummification) and clay and glazed ceramic cups (pictures here). Even more exciting to Hussein was the discovery of the ingredients and possible measurements for making the secret embalming fluids.

“This [discovery] is so important as it’s extensive. We have oils and measuring cups – all of them are labelled … from this we can find the chemical composition of the oils and discover what they are.”

The laboratory was located next to a 30 meter (98 foot) shaft filled with the end results – mummies. On one of these mummies they found something nearly as significant as the workshop – a gilded silver mask belonging to a priest. Only a handful of these masks covered with precious metals have been found due to looting.

That brings us to how the mummy lab was found in the first place. The Saqqara necropolis of Memphis was last excavated in 1900 but was looted in 2011 during Egyptian protests. It was reopened in 2016 as part of Egypt’s push to use archeology to increase tourism. Artifacts from the discovery of the mummy lab are already on display at the Grand Egyptian Museum, which is still under construction. 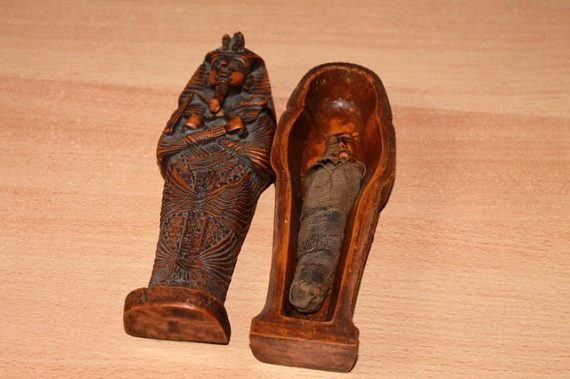 Is this push to increase Egyptian tourism through mummies the new looting? Despite warnings, archeologists plan to open a giant mysterious sarcophagus discovered in Alexandria. Researchers are also going back to previously-investigated tombs and sites to search again. Is archeology and history being pushed aside in the name of money? Peru seems to be making an attempt to protect its mummies – real or otherwise – and the World Congress on Mummy Studies is pushing for the same in other countries. Can the mummy workshop at least be protected until its secrets are studied by scholars?

Or is this just another example of why we can’t have nice things?