The Mystery of Ancient Nuclear War

One of the worst threats to hang over the head of humankind in recent times is that of the grim specter of nuclear war, the effects of which we got a brief and tragic taste of back in World War II with the bombs dropped to horrific effect on Hiroshima and Nagasaki, Japan. The thought that the whole world could be reduced to such devastation is a fear that constantly looms over us in this day and age, with good reason, but this must surely be a modern fear, right? After all, nuclear weapons are devices of sadistic human ingenuity that have only come about within the last century with the development of our macabre technology, are they not? However, according to ancient texts and some anomalous evidence, it has been alleged by certain conspiracy theorists that nuclear strikes were possibly carried out thousands of years ago, far back in the mists of time.

One of the main historical oddities that has been used to illustrate the possibility of an ancient nuclear war is supposedly contained within the 8th century Sanskrit epic the Mahabharata, which chronicles the Kurukshetra War and battle between Rama and the ancient king known as the Demon Ravana. Within these pages are claimed to be references to some catastrophic event that in many ways sounds exactly like what one would expect a nuclear strike to look like, such as an annihilating explosion described as being “brighter than a thousand suns,” which caused all trees to instantly ignite into flame, and reduced everything in its path to ashes. Indian historian, Kisari Mohan Ganguli, has said of such weapons of mass destruction in old texts:

Indian sacred writings are full of such descriptions, which sound like an atomic blast as experienced in Hiroshima and Nagasaki... The passage tells of combat where explosions of final weapons decimate entire armies, causing crowds of warriors with steeds and elephants and weapons to be carried away as if they were dry leaves of trees. 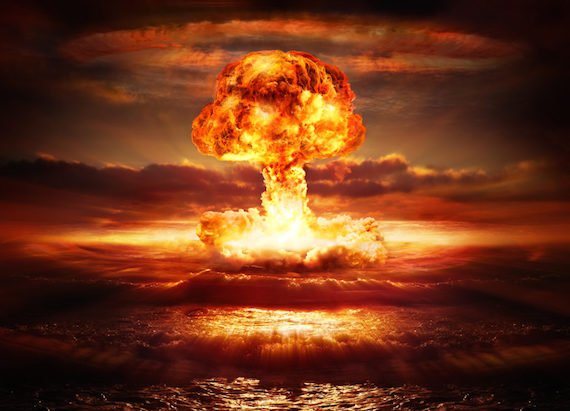 Interestingly, the texts also mention that survivors of the catastrophe later fell down ill and lost their hair, which undeniably sounds very much like radiation sickness, thousands of years before they should have even known what that was. According to one purported rough translation, one section reads:

A single projectile charged with all the power in the Universe…An incandescent column of smoke and flame as bright as 10,000 suns, rose in all its splendor…it was an unknown weapon, an iron thunderbolt, a gigantic messenger of death which reduced to ashes an entire race. The corpses were so burned as to be unrecognizable. Their hair and nails fell out, pottery broke without any apparent cause, and the birds turned white. After a few hours, all foodstuffs were infected. To escape from this fire, the soldiers threw themselves into the river.

Besides this text, there are various archeological sites throughout the region and indeed the world that supposedly hold evidence of such nuclear destruction in an era long before World War II. One is the site of the mysterious ancient city of Jodhpur, which lies along the edge of the great Thar desert in India, and is said to have long been plagued by unusually high levels of radiation since ancient times. Inhabitants here have long been said to have much higher incidences of cancer, birth defects, and other radiation related complications than other areas, and radiation readings here have quite often gone off the charts. Why should that be?

Another is skeletons supposedly unearthed at the ancient ruins of the city of Mohenjo-Daro, Pakistan, in 1927, which are infused with high radiation levels and appear to have been people who dropped spontaneously where they stood to lie there in the streets, as if from some great weapon of mass destruction that had struck them down instantly. Many of these skeletons, which are strangely devoid of the amount of decay one would expect, were purportedly found lying face down right in the streets, in some cases still holding hands as if they had been anticipating the doom that was coming for them, and some of the rocks of these ruins seem to have been partially crystallized as if by some incredibly intense flash of heat. Indeed, British Indian researcher David Davenport claimed to have found rocks with evidence that they had been mysteriously fused and blasted into glass with heat as high as 1500°C. Something very unusual happened here in around 2,500 BCE, but what it was remains unclear.

Speaking of anomalous fused glass, there are other sites around the world that exhibit the same phenomenon. In December of 1932, a surveyor from the Egyptian Geological Survey by the name of Patrick Clayton found a mysterious sheet of glass buried in the sands of the Great Sand Sea, near the Saad Plateau in Egypt. Such mysterious glass chunks have been found in such disparate places as the deserts of Libya, the Sahara, Mojave, and others. Experts who have looked at such unusual glass formations have often likened them to the sort of glass left behind by nuclear tests at places like the White Sands missile range, in southern New Mexico. Engineer Albion W. Hart famously once likened the glass left behind at the missile range to similar deposits he had personally witnessed in the deserts of Africa, but speculated that the ones he had seen would have had to have come from a blast roughly 10,000 times more powerful than the detonations at White Sands.

Some scientists have tried to explain these vast glass deposits as the result of some meteorite impact, but the lack of any crater makes such speculation problematic. There is also the high purity and transparency exhibited by much of this glass, which is not consistent with a meteorite strike. So what caused these weird glass deposits? No one really has a clue. Evidence such as this and the other accounts we have looked at have caused some theorists to proclaim that it all points to some sort of event or events involving nuclear weapons far in the past, although how this could have occurred is left to speculation, such as that it was due to time travelers, aliens, or both.

Whatever the cause may be, it on the surface seems when looking at these cases that at least the evidence for some sort of ancient nuclear apocalypse is rather solid and undeniable, but did any of this actually really happen? Unfortunately, there are many problems with this idea, not the least of which is that no official historical or archeological account gives any mention of such a cataclysm, and there has been much doubt cast upon the veracity of the claims of ancient texts describing such doomsday events. There has also been much criticism aimed at the methodologies used and the way the findings made at places like Mohenjo-Daro were analyzed and interpreted, with later studies showing that the bodies were not merely lying in the streets, but had actually merely been displaced from their original graves. Their bodies were also explained as being so well preserved due to the dry and hot climate of the region. 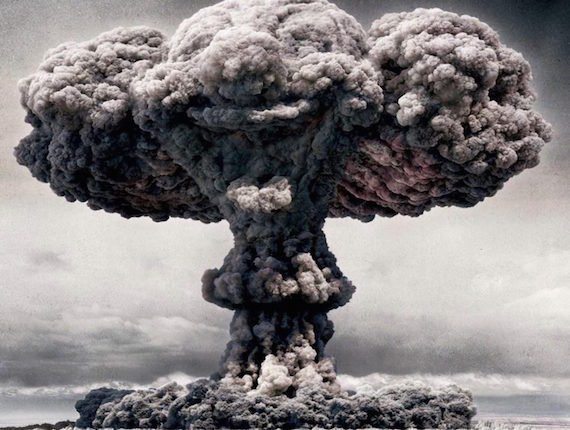 Other findings such as the fused glass and radiation have also been looked at with a skeptical eye, likely caused by rational reasons, and since the buildings themselves are mostly intact it seems odd to presume a nuclear blast should have swept through this site, although the area could have been built up again after the strike. The ancient texts describing some doomsday scenario have also been called into question, with Brian Dunning from the site Skeptoid perusing the translated version of the Mahabharata for any references to a nuclear war and finding none, leaving him forced to maintain that such tales are fabricated at best. You can read Dunning’s rather thorough deconstruction of the ancient nuclear war theory here.

Despite all of this debunking, the matter is not really settled for some, and many mysteries remain. There are certainly many conspiracy theorists who stand by the notion that such an ancient nuclear war really did happen, that the evidence proves it, and it seems that the debate will keep going on for some time. It is curious to wonder about how, if such an event ever really took place, did this all come to pass? Why would such sophisticated agents of destruction be available so many thousands of years ago and who would have been behind deploying them and for what reasons? We will never know either way, but we can hope that it never happens again.

Looking Back at a Quest to Find a Chupacabra