“When I made noise, she woke up and looked startled so I consciously raised my frequency, gazed lovingly into her eyes, and communicated using feline-speak eye blinking to calm her.”

A woman in Oregon who walked into her house to find a mountain lion sleeping in her living room claims she used mental telepathy to transmit pictures to the consciousness of the cat that led it peacefully out of her house and back to its natural habitat.

Get your cougar-to-cougar communications jokes out now. 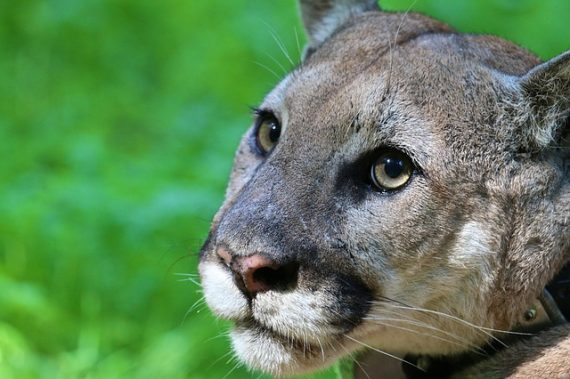 Finished? A Facebook post (complete with pictures and videos) reports the terrifying telepathic tale of Lauren Taylor of Ashland, Oregon, and a mountain lion (Puma concolor) of the nearby Siskiyou and Cascade ranges. On July 8, Taylor walked into her living room and found a live cougar staring at her. A shout by another person in the house startled the cat and it unsuccessfully attempted to exit out of a closed window before hiding behind a couch. A brave Taylor checked on the cat later (what did she do in the meantime … collect balls of yarn?) and found it asleep.

What would you do next? Call 911? Leave the house and hope for the best? Scrounge the neighborhood for all the catnip you could carry? Not Lauren Taylor.

"When I made noise, she woke up and looked startled so I consciously raised my frequency, gazed lovingly into her eyes, and communicated using feline-speak eye blinking to calm her. It was amazing to realize that this worked. I gazed lovingly then blinked hard and then she did it back! Then, she went back to sleep."

In case you’re wondering, Lauren speculates that the cat came in through an unlocked back door (what did your father warn you about not locking doors?) after drinking (and probably dining) out of a backyard pond. Apparently, she believes her feline psychic abilities protect her from the dangers of open doors and hungry cats.

“Cats are extremely psychic and perceptive of energy and this lion could have been dangerous in an energy field of fear or anger. In fact, before I consciously elevated the energy field and entrained her to a theta state, a housemate had shouted and slammed a door upon seeing her and the lion was frightened, agitated, and determined to exit through a closed window. Once the energy shifted, she calmed down.” 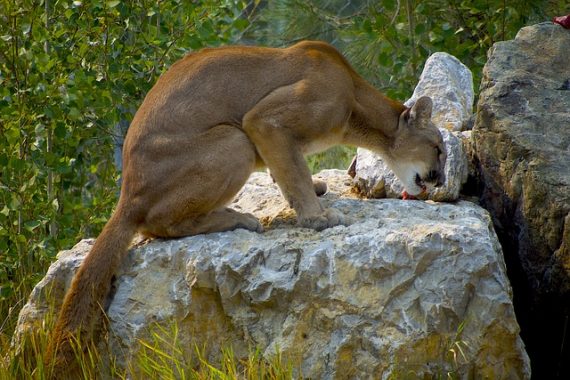 Kids, don’t try this at home … or at your friend’s house or in the woods or at the zoo either. Lauren may not be a trained wildlife specialist (she’s a lawyer … wonder if this telepathic stuff works with juries?) but she at least sounds like she knows her big cat psychology.

“I sent telepathic pictures of the routes out of the house via open doors and the route out the backyard, across the creek, through an open field, and back up into the hills. We got guidance that the way to rouse her and get her to leave her safe spot behind the sofa without panicking was through drumming. We called in native ancestors’ support and started drumming. She roused and knew just what to do.... walking out through the open doors, through the yard, across the creek, and through the empty field behind us exactly as we had shown her.”

It's nice that this cougar encounter had a happy ending … for both the cougar and for Lauren Taylor.

Real Lake Monsters or Creatures of the Mind?