This might be the most Australian thing that's ever happened.  A woman is heading home from cricket practice near Nimbin in New South Wales. She gets out of her car to "have a pee" and ends up face to face, cricket bat in hand, with a 7-foot tall Yowie—Australia's bigfoot— described as having glowing eyes and "hairy breasts." I don't mean any insult to the Australians, let me be clear. Everything about this encounter is incredible.

The report comes courtesy of Dean Harrison's Australian Yowie Research. It was reported anonymously—so, take it as you would any anonymous report, while keeping in mind that there are very good reasons to not want your name attached to reports like this—and concerns an event that happened on March 5 of this year. According to the anonymous woman, she had left cricket practice at around 6:30 PM and "detoured along a dirt road and went over a cow crossing when [she] needed to pull over to have a pee." That's when her Yowie troubles began.

The woman says she had "finished her wee" and heard something moving near her, so she started howling at it. It howled back, and so she howled again and it continued this way until she heard growling, so she got out her cricket bat. The woman who sent in this report might be the most amazing character in this story, here's how she describes the next bit of the encounter:

"When it started doing tree knocking back at me, I thought 'Oh yeah, it's someone playing silly buggers with me', but there's no houses out there, it's just bush. I thought it must have been some smart ass out there playing a joke on me.

It knocked twice, so I knocked back twice. I knocked again, and it did the same back. I thought stuff this and did a howl and a scream - that's when everything went pear shaped."

She says the Yowie came bounding out of the gully and she thought it might be a kangaroo, but it sounded heavier than anything she had ever heard before and says "it was like the ground was moving underneath me." When it was 10 meters away, she says that she got "really bad vibes" and jumped into her car. Here's how she describes what she saw once the headlights were on:

I know it was no person in a suit. It was standing on the fire trail, 6 to 7ft tall and full of hair and it had breasts. I went for my phone to take a photo of it. I didn't take my eyes of it when I was reaching for the phone, and then off she went. Back down into the gully. It was scary.

When it was in my headlights, it was 6 to 7ft, it had a face with eyes about golf ball size, it had really long hair which as a guess would have been about 5" long.

Instead of being round like a human face, this was more of an oval size. It had big golf ball size eyes. Most reports you read tell of red eyes, but these were reddish-blue and they lit up with my light bar on. It had a nose that looked pushed in type of thing. It had a beard, and hair over its top lip. One thing I found strange about it was the mouth. The human mouth is small, this one's mouth was 5 to 7" long. It had a big mouth on it. I didn't see any teeth because its mouth wasn't open." 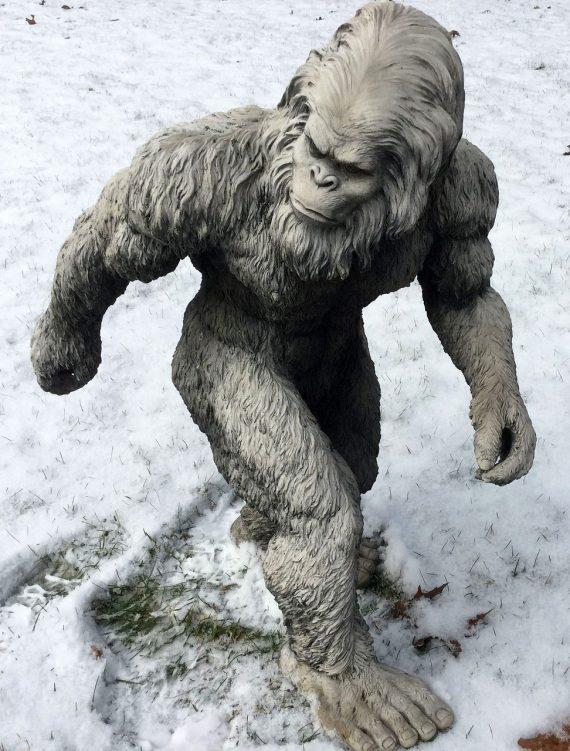 Definitely a scary sight if it's true. The woman stresses repeatedly that she did try to take a photo. So while this is a fantastic story, it's not anything close to proof or evidence. Here's the thing, though. It's easy to say "oh sure you tried to take a photo" and completely write it off, but all of this happened in a very short window of time, and if it is true than any reasonable person would probably be a little too deep into the fight-or-flight response to work their cell phone that quickly.

Wait a minute. "Reasonable person." Take a look at this quote:

When I was reaching for my phone, I saw that its hands were all the way down towards its knees. I'm 6 foot - 7 inches, and my arms don't come down near my knees. The arms were huge.

She's just as tall as the Yowie. Now, I don't want to jump to conclusions, but I will. Bigfoot has figured out the internet and it's trying to throw us off the trail. They're always one step ahead of us...

Floating ‘City of Angels’ Appears in the Sky in China