Another Sphinx Discovered in Egypt

There are plenty of giant pyramids in Egypt, but there’s only one Great Sphinx of Giza … or anywhere else for that matter. While there have been rumors of a second Sphinx buried near the Great One, possibly facing in the traditional opposite direction as seen in statues or depictions of smaller sphinxes, none have ever been found to match the size of the original. Now, the Ministry of Antiquities has announced that a second giant sphinx was accidentally discovered by workers digging a road and, while it hasn’t been removed from the ground, there’s enough showing to confirm its existence and potential greatness.

While the discovery was heralded by Egypt Today and other media sites and Minister of Antiquities Khaled al-Anani is encouraging tourists to come and see it, not much is known about this sphinx and few pictures seem to be available. As with the recent giant sarcophagus filled with sewage water discovery, Egypt seems to be catering to tourism over archeology.

What we do know is that the sphinx was discovered on Al Kabbash Road by workers on the Al Kabbash Project, whose goal is to connect the Luxor Temple with the Karnak Temple by the end of 2018, allowing tourists easier and quicker access to both while facilitating electricity and water for both visitors and residents. The site is just six miles from the Valley of the Kings burial site, home of the tomb of King Tut among others. Perhaps the most exciting and unusual part of the discovery is that this sphinx is of the “classic” style like the Giant Sphinx – the head is of a lion rather than a ram or something else.

Despite the uniqueness of this sphinx and the excitement of Minister of Antiquities Khaled al-Anani and local plastic sphinx vendors, director-general of Antiquities Muhammad Abdul Aziz is slowing things down. He has stopped all road construction and is urging archeologists to proceed cautiously out of fears that the statue will crumble when exposed to new above-ground climate conditions … does anyone remember seeing the nose on the Great Sphinx? 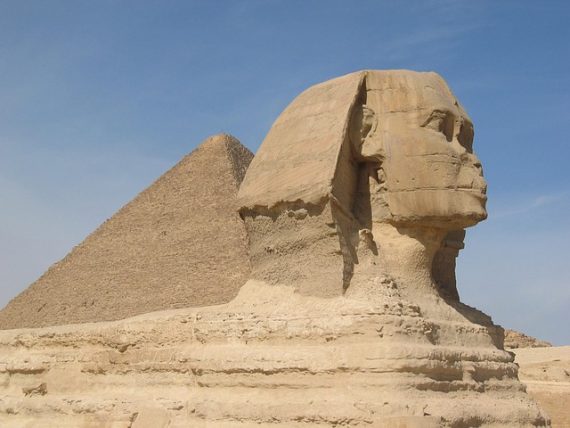 Before you get too excited and plunk down your hard-earned cash on a trip to see the next big sphinx, keep in mind that the same Ministry of Antiquities which is promoting it as a tourist attraction also prohibited any photos being taken. That may be a sign this new sphinx is not the same as the old Sphinx and may not be 240 feet long, 66 feet high and date back to 2500 BCE. Sure, it could be bigger and older, but it’s probably not. There’s also a big road project being held up by its discovery – a project that’s nearly complete and can’t easily be diverted … although a roundabout with a sphinx in the middle might be an even greater tourist attraction that the Great One.

Perhaps it’s time to turn the entire country into a tourist attraction – nothing else seems to put an end to Egypt’s many other problems.