Scientists are always messing with creatures – pigs, humans, fruit flies, etc. The results are not always good and the messed-with creatures were usually better off before they met the scientists. CRIPSP – the controversial gene editing tool that uses an enzyme as pair of molecular scissors to cut strands of DNA – was supposed to take the risk out of creature-creating and some scientists were comfortable enough to use it on human embryos. However, they avoided messing with really important and essential creatures that we can’t do without – like the yeast used to make beer.

According to new study published in the journal Nature, researchers in China (of course – do they ever drink beer there?) used CRISPR on Ascomycota – the yeast found in beer and other foods. Ascomycota are single-celled creatures and have always had 16 chromosomes. These scientists decided to use CRISPR to reduce that number to one giant chromosome. Unless the plan was to make beer that’s 16 times more potent or contains one-sixteenth the calories of regular beer, this sounds like a bad idea. Why did they mess with beer? 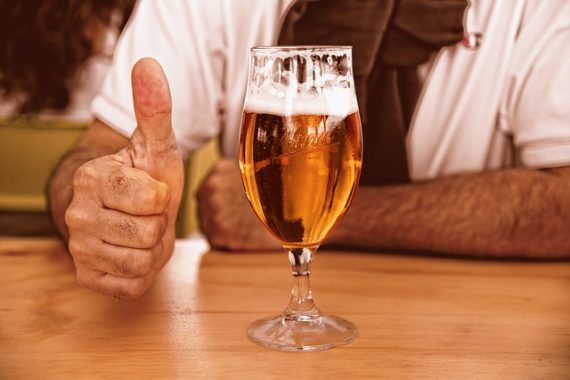 “The advantages to a eukaryotic cell of multiple chromosomes instead of a single chromosome is not clear. In this study, we have reorganized the genome of Saccharomyces cerevisiae [the same yeast species used to brew beer] into one giant chromosome, in order to explore whether a yeast cell with an artificially fused single chromosome can survive and complete a sexual cycle.”

Sex … of course! What else could you do to make the perfect food even more perfect? In simple terms, the researchers used CRISPR to edit out the button centromeres – pieces of DNA that hold chromosomes together – and then allowed them to reconnect randomly on their own using the yeast’s natural genetic recombination mechanisms – until the 16 become one yeastly giant. (Beauty and the Yeast? Make note of possible horror movie title).

What did they do next? These are professionals … and men. They poured themselves some adult beverages and watched the giant chromosome yeast cells have sex. Believe it or not, that was the true purpose of this experiment – to determine the reason why cells have chromosomes at all and to see if artificial, man-made species can reproduce. To answer the second question first – the mutant one-chromosome yeasts were able to create offspring with other mutants .. but fortunately not with normal yeast. The first question remains unanswered and was probably just thrown in to get funding.

What did the researchers do with the man-made, one-chromosome yeast cells? In most other CRISPR experiments, like the ones editing human embryos or creating human-pig hybrids, the cells are destroyed soon after creating them. However, we’re not talking chimeras here – we’re talking beer. Unfortunately, nothing seems to be known about what happened to the new yeast species.

Will China simultaneously become the world leader in chromosomes and beer? We’ll know if the most shocking, entertaining and creative commercials during the next Super Bowl are for Chromo-foam, Y-nekens and Samuel Atoms.

Unexplained Cattle Mutilations Linked to Lights in the Sky