Last week, To the Stars Academy of Arts and Science (TTSA), Tom DeLonge’s public benefit corporation dedicated to seeking answers to the UFO mystery, announced that it was launching its “flagship” research project.

The Acquisition and Data Analysis of Materials, known as A.D.A.M., focuses on,

“the collection and scientific evaluation of material samples obtained through reliable reports of advanced aerospace vehicles of unknown origin.”

This material often referred to as ‘meta-materials,’ is usually a bizarre collection and amalgamation of alloys. Not found in nature, meta-materials are constructed from multiple elements to form composite metals. The various elements are arranged in patterns, often on the microscopic level, to manipulate electromagnetic waves. They can bend these waves, absorb them, enhance them and block them for a variety of purposes. Technologically, this is an important frontier that has been talked about a lot in physics.

Building an aircraft, for example, out of a specific meta-material which absorbs EM radiation would fundamentally make it invisible on radar, and even, with the right combination of elements, the naked eye. Perhaps you wanted to transmit a signal, like a radio wave. If the antenna used to transmit the signal is made out of this fancy new meta-material, you could fashion it using certain patterns of elements that would significantly enhance the signal and cast it across a great distance.

The A.D.A.M. project is suggesting that anomalous aerial phenomena, UFOs basically, seem to be leaving similar materials behind. Basically, little bits of unknown aerial vehicles are showing up. While stories and accounts of UFO debris fill the narrative, like a crashed flying saucer outside of Roswell, meta-materials seem to be the next big thing in UFO research. While there exists significant disagreement on the whole UFO meta-material thing, the project is being headed up by Dr. Hal Puthoff and EarthTech International.

Dr. Puthoff has a long history in dealing with esoteric stuff, such as parapsychology and UFOs. That being said, he is an established scientist, educated at Stanford University, who focuses on exotic physics. While he has many critics, to any card-carrying member of the UFO community, he is a big name.

I reached out to Dr. Puthoff to ask him about how this whole relationship between EarthTech and To the Stars began. While there is a clear personal connection since he does serve as the Vice President of Science and Technology for To the Stars, it goes a little deeper than that.

“Due to the widespread publicity that TTSA has received, individuals claiming possession of materials that might be from advanced aerospace vehicles of unknown origin have come forth and have agreed to provide them to TTSA for analysis.”

He went on to explain that EarthTech’s analytical equipment and its engineers have the requirements which fit this type of research and analysis. He stated,

“TTSA reached out to my organization, EarthTech International, to carry out the analysis on a contract basis, and we have agreed to do so…it is a very straightforward contractual relationship, and the results will be provided to TTSA for their dissemination as they see fit.”

On the less conspiratorial side, the UFO community has been pretty divided over To the Stars Academy in general. While some individuals view it as an important step in the study and research of UFOs, others have already deemed it a failure. I personally have written several articles about this organization’s potential cultural impact on UFO discourse.

Looking at the overall history of UFO studies, what some call ‘Ufology,’ no single project or program has ever succeeded in solving the enigma. UFO reports in earlier decades used to involve saucers landing on protruding metallic legs in fields with strange looking men in jumpsuits collecting plant samples, or tall floating robots that blasted bright beams of light at witnesses. Modern-day UFO reports rarely, if ever, contain such tales anymore, at least in the United States. Assuming UFOs are a real phenomenon, it begs a serious question; do we even know what to look for?

Perhaps meta-materials are the modern-day interpretation of the phenomenon? It is not that flying saucers didn’t use to land, and that short jump-suited men didn’t collect plant samples, nor is it that light beam shooting robots weren’t real either. It may just be how the phenomenon manifested to the witnesses during that time. The famous psychologist Carl Jung stated that flying saucers were “a living myth.” Are meta-materials merely our current cultural interpretation of the mythological UFO mystery?

Furthermore, once we have become masters of meta-material technology, will the myths change? Everyone in the 1890’s viewed the mysterious airships in the American Midwest with their massive propellers as amazing technology. The invention of the airplane put an end to those sightings. It will be interesting to see what the UFO narrative and discourse looks like in two decades when meta-materials become more mainstream in everyday gadgets. Will people still be collecting hunks of UFO material in undisclosed desert landscapes in New Mexico, or will it be something new? 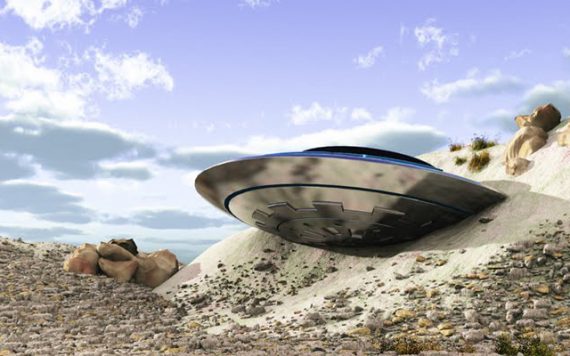 Does this mean that To the Stars, A.D.A.M. and Puthoff are engaged in a wild goose chase? No. They, like the rest of the UFO community, are simply working with what they think they know. Similarly, Puthoff’s critics make assumptions based on the data they currently have. If the UFO phenomenon teaches us anything, it is that nothing is static and, more importantly, nothing ought to be taken for granted. In other words, data changes, especially over time. While I have no idea if Puthoff and the A.D.A.M. project will be successful at finding otherworldly meta-materials, I am sure that the phenomenon will do its best to remain as elusive as ever.

I asked Puthoff if TTSA had any strange meta-materials in their possession. He responded,

“Materials with interesting claimed histories have been provided, but technical evaluation of them is yet to be carried out, so it is too early to say.”

As with any breakthrough, time is a major player. This project will either die emptyhanded or, hopefully, shed light on the UFO enigma. Whatever the case, I wish them the best of luck.

I’ll conclude with something UFO researcher Chris Wolford tells me on a weekly basis in regard to the UFO phenomenon, “a tsunami is coming.” People have been saying that for decades so I’m not holding my breath just yet. That being said, I did buy a life jacket on Amazon. You know, just in case.

MJ Banias
MJ Banias is the author of “The UFO People: A Curious Culture” and curates the popular Fortean blog “Terra Obscura" and YouTube channel. He has appeared on multiple radio shows and podcasts including Coast to Coast AM, and his work has appeared in Fortean Times Magazine, FATE Magazine and in the book, “UFOs: Reframing the Debate."