Space is big. It's incredible that no one's ever written that sentence before, right? It goes without saying that space is the biggest possible thing, the awe-inspiring majesty of it sort of cheapened by even being described that way. Why say it in the first place? Well, when something is unreasonably large, the chances of stumbling upon a specific thing are very very slim. The phrase "finding a needle in a haystack" comes to mind, but when dealing with the vastness of the universe it's more like finding a needle in 12 million haystacks, and even that falls a good deal short. The needle in this case, four needles to be precise, are four of the oldest galaxies in the visible universe. It turns out they're our neighbors, orbiting our very own galaxy, the Milky Way.

This is according to a paper published in the Astrophysical Journal by scientists from the Harvard-Smithsonian Center for Astrophysics and the Institute for Computational Cosmology at Durham University. They analyzed what's called the "luminosity function" of galaxies around the Milky Way and the nearby Andromeda galaxy. The luminosity function of a galaxy is how bright it is, and analyzing it can give scientists a clue as to when the galaxies were formed. They found four dwarf galaxies in orbit around the Milky Way that were formed soon after the big bang, when the rules of the game were entirely different. 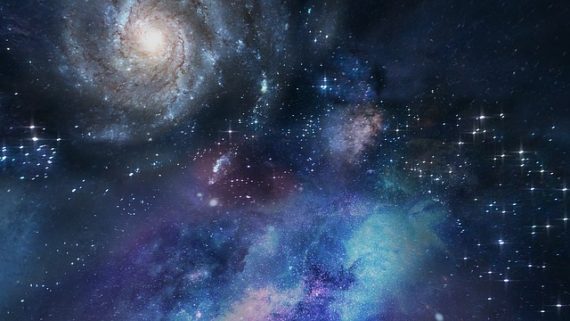 The history of the universe is long and strange. After the big bang there was a period of 380,000 years where the universe was rippling with all of the expelled energy of whatever happened back then. Then it began to cool off in a period known as the "cosmic dark age" which lasted for 100 million years, which is hardly the blink of an eye when looking at the total timeline of the universe. For context, sharks, as a species, have been swimming around earth for 400 million years. It was during this cosmic dark age that the first galaxies were formed. These galaxies emitted high-intensity radiation that ionized the hydrogen molecules and made it impossible for them to cool and form new stars and galaxies, hence the "dark age."

Later, when things finally settled down hundreds of million years later, a period known as the "reionisation" occurred which allowed new, brighter galaxies to form. This is how the luminosity function of galaxies help scientists determine their age.

The four galaxies discovered around the Milky Way—named Segue-1, Bootes I, Tucana II and Ursa Major I—are small and dense and dim. They also have properties totally unlike our own. According to Dr Carlos Frenk, an author of the paper:

If you go and examine these primitive galaxies, you should find bizarre things about them. Being the first ones, they should have properties that are unique to them.

One could think that, maybe some of these pre-reionisation galaxies are more compact than their counterparts that formed afterwards. They were formed at a time when the Universe was much denser, because the Universe was smaller.

Remember that needle in the haystack analogy? It's not entirely accurate. In fact it may be more like 12 million needles stuffed into a single stack of hay. The reason that these galaxies were discovered is due to that fact that they're so close. These dwarf galaxies are small and dim enough that there could be any number of these dark age galaxies in the universe, and scientists say they could outnumber the modern galaxies like our own Milky Way. It's just another example of the more we learn about space, the less we know for sure.