Lost City with Walls, a Pyramid and Human Sacrifices Found in China

There are certain archeological finds that are worthy of being described as something that will “change history as we know it.” Often, the find includes a pyramid where there aren’t any others, a huge lost city, gold and jewels beyond description and, of course, massive human sacrifices. A new discover in China check all of those boxes. Is it change-worthy?

"Evidence so far suggests that the stepped pyramid complex functioned not only as a residential space for ruling Shimao elites, but also as a space for artisanal or industrial craft production."

When you’re located in close proximity to the Great Wall of China, your identity can easily be absorbed by it. That seems to have been the case with a pile of rubble in Shenmu County, Shaanxi, in central China. Known for centuries as the location of the ancient city of Shimao, the pieces of structural stones were indeed part of a wall, but recent excavation at the site reported in the journal Antiquity and in LiveScience found that the stones were in a wall surrounding an ancient – and quite large -- lost city … one that predates the Great Wall by around 1500 years. In fact, while some people were just starting on the Great Wall, the residents of Shimao had already completed a 70-meter (230 foot) step pyramid. Why did the Wall survive while Shimao did not?

“In the outer gateway of the eastern gate on the outer rampart alone, six pits containing decapitated human heads have been found.”

A team of archaeologists led by Li Jaang, a professor at the School of History at Zhengzhou University, found evidence that a city whose unknown name predate Shimao was located at the site and the surrounding area of almost 1000 acres. Built 4,300 years ago, it would have been one of the largest cities on the world at some point during its 500 year existence. The walls surrounding the city were unusual in that they were made with stone rather than just compressed mounds of dirt and contained pieces of jade between the stones. The walls appeared to be high enough and strong enough to protect the large city from invaders and keep some residents from wandering off … or escaping. Why would they do that?

"Morphological analysis of the human remains suggests that the victims may have been related to the residents of Zhukaigou, which could further suggest that they were taken to Shimao as captives during the expansion of the Shimao polity."

While the structures of Shimao, especially the palaces and the pyramid, are elaborately designed and decorated with carved jade stones and murals from skilled local craft workers, historians also point out that the citizens were known to the surrounding area as “barbarians.” The size of the city indicates its power over the area and the pyramid is evidence of its religious significance for a culture that practiced extensive human sacrifice. 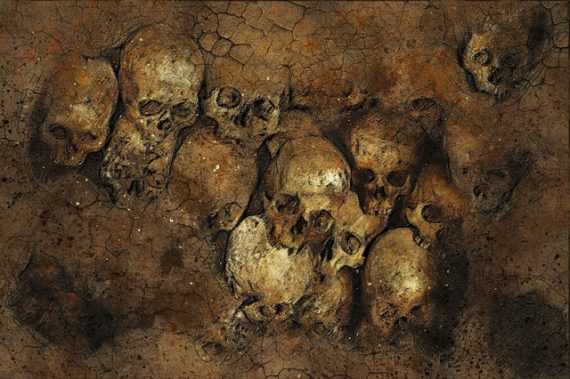 What caused the downfall of this large and seemingly powerful walled city and religious center at a time when the Great Wall was being built to protect everyone else? That’s still open for further research.

Is this a history-changing discovery? Not yet. What it proves once again is that practicing human sacrifice doesn’t seem to allow cities to survive.

“Little Men” on a Mystery-Filled Mountain