Mini Bigfoot May Be Roaming Around Northern Florida

Which is more believable – there’s a town in Jackson County, Florida, named Two Egg or there’s a mini Bigfoot in Florida named the Two Egg Stump Jumper? We’re talking Florida here, so the correct answer is “all of the above.” On the official list of “100 Great Things about Jackson County, Florida,” the Two Egg Stump Jumper is at #92, but it may move up now that there’s been a recent sighting. The good news is, there’s 99 other things to do in Two Egg if you don’t see the Stump Jumper.

The YouTube channel Two Egg TV, which “travels the back roads of the southeastern United States in search of great stories and cool off the beaten path places,” released a clip this week of local expert Rachael Conrad pointing at what she claims is evidence a Two Egg Stump Jumper passed through recently. There’s not much evidence to see because what this really is is a rough trailer for "Stump Jumper: The mini-Bigfoot of Two Egg, Florida." Until that documentary is released, here’s what’s known about the creature and its stumping grounds. 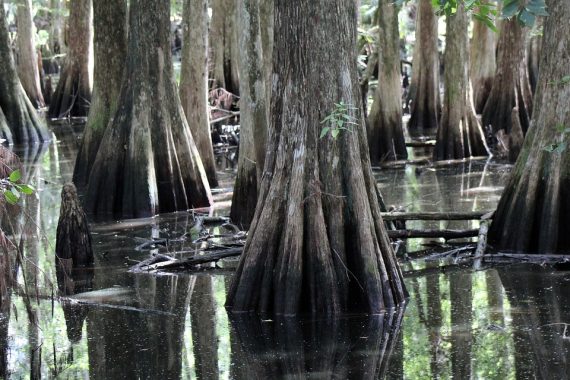 Before you start throwing eggs, the name Two Egg dates back to the Depression when the only town store would take goods in trade. Two boys came in so often with two eggs to trade for sugar that it became known as the Two Egg Store and the tiny town near the Alabama border at the intersection of State Road 69 and State Road 69A became Two Egg. The most famous resident is actress Faye Dunaway, and the most famous cryptid is the Two Egg Stump Jumper.

Sightings of the creature – sometimes described as a small Bigfoot or a diminutive version of Florida’s famously stinky Skunk Ape – have been reported for decades in this swampy locale. A 2013 report was made by six people who heard something following them in the nearby Parramore Landing Park and making a loud growl or roar. While they didn’t see the creature, there are other reports by motorists, usually at night (of course) who have seen something small yet humanoid running across a road in their headlights.

In the video, Rachael Conrad shows alleged tracks, trails, a possible bedding or shelter and other potential pieces of evidence in the Stump Jumper Slough, a swamp about 7 miles from Two Egg (close enough to claim it) that is known for sightings. Unfortunately, that’s all of the evidence of the Two Egg Stump Jumper because there are no known photographs … unless that’s going to be the big reveal in "Stump Jumper: The mini-Bigfoot of Two Egg, Florida" which will be released this fall by Two Egg TV. 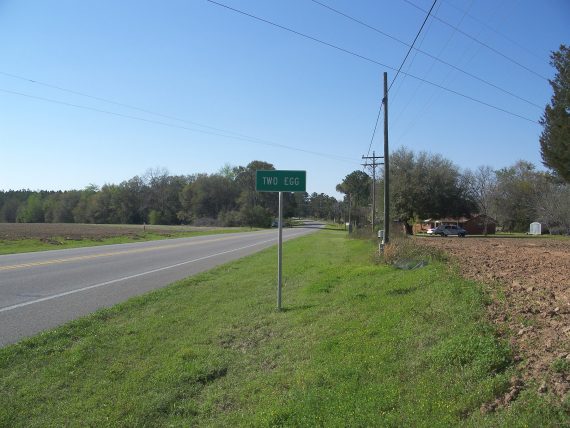 Is the Two Egg Stump Jumper a mini Bigfoot or a Skunk Ape … or is it something else? Voting for “something else” are the residents of the Buena Vista Landing area about 10 miles east of Two Egg who claim they’ve been seeing rhesus monkeys in the trees around nearby Goodwin Lake. The monkeys have allegedly been there for at least 75 years, having either escaped form labs or private homes.

If you get to Two Egg and see a monkey instead of a mini Bigfoot, you can still go looking for Faye Dunaway’s house or the old grocery store or the Elizabeth Bellamy Bridge, which is haunted by the ghost of a bride-to-be who died when her wedding dress caught fire.

On second thought, even seeing a monkey sounds more exciting than that.