1973 was quite a year for UFO reports in the United States. Amidst a countrywide rash of reports where people claimed to see unusual lights and, occasionally, more structured craft over America, one incident from that year stands out in UFO literature as being one of the most detailed and complex situations ever reported.

On the night of October 11, 1973, Charles Hickson and Calvin Parker were fishing together at an abandoned shipyard near the place they worked together. As the story goes, a blue light emerged from the clouds above them, and the men watched a football-shaped object descend and hover nearby, from which two very unusual "beings" emerged. Hickson and Parker were somehow forced onto the aircraft, in which examinations were performed on them before they were released again, bewildered and badly frightened.

The two men subsequently went to local authorities (and the press), at which time a secret recording was made by law enforcement of the two men privately discussing how terrified they were. Thus the world soon learned of what became known as the Pascagoula incident.

The details are astounding indeed, whatever they might entail. I say this not with cynicism about the pair's retelling of events, per se, since the details of their story remained remarkably consistent over the years. However, despite being generally a "good case" as far as the crazier UFO reports go (there was never any evidence that the men had conspired as attention seekers, for instance), there are some peculiarities with Pascagoula incident that are worthy of mention. 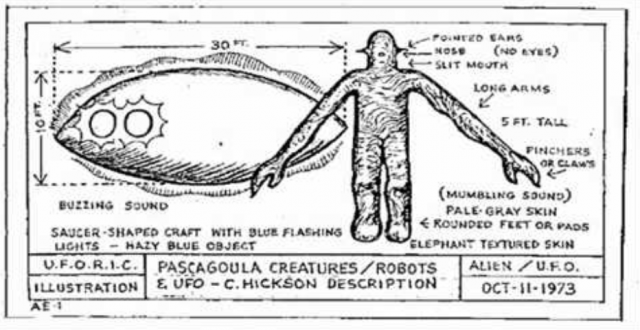 For instance, as it must be admitted outright that Hickson and Parker's story is quite unlike most other UFO reports. In fact, many aspects of the incident were completely unique and bore no common features with other popular UFO narratives. Chief among these had been the entities encountered during the experience: as skeptic Joe Nickel has noted in the past, "Three robotlike aliens exited from the craft; although they were gray humanoids just over five feet tall, they were otherwise of a type not reported before or since."

The Clarion-Ledger recently reported that Parker, the younger of the two witnesses, has recently authored a book about his experience, in which he described the craft as it first appeared to them as follows:

"A big light came out of the clouds," Parker said. "It was a blinding light.

"It was hard to tell with the lights so bright, but it looked like it was shaped like a football. I would say, just estimating, (it was) about 80-foot. (It made) very little sound. It was just a hissing noise."

While the craft described by the witnesses is often likened to a blue-colored football, it is important to note how Parker describes it here, in "breaking his silence" about the incident after all these years (so says the Ledger at least; he's actually discussed the incident several times, and has seemingly changed or updated aspects of his encounter over the years, more of which we'll discuss later).

As Parker says, it was hard for he and his companion to tell precisely what the shape of the object was, due to the lights it produced. Additionally, although Parker says the object made little in the way of sound, he does describe a "hissing" noise, similar to the "zipping" noises described by the witnesses in previous interviews.

It might seem like a stretch to propose that this could have been any kind of conventional aircraft (i.e. something manmade). However, it might be worthwhile to compare this part of the narrative to another famous UFO incident from a few decades earlier: that of Brazilian farmer Antonio Villa Boas, who on an October evening in 1957 was taken aboard an unusual aircraft, and made to have sexual relations with a beautiful woman with large eyes and other appealing assets. Villa Boas described the aircraft that appeared on the night in question as being oval-shaped and having made little noise apart from a sort of whirring sound.

I recall talking with my friend and fellow Mysterious Universe writer Nick Redfern about the case a few years back, and remarking that Villa Boas "would have been able to identify the object had it merely been a helicopter." What Nick said in response to this surprised me.

"Well hold on," he began. I could hear him ruffling through papers and files over the phone, as he looked for his notes about the actual wording used by Villa Boas in the description he had given of the incident, rather than that of the later writings and rewritings about the incident in UFO literature, which simply described an oval or "egg-shaped" object. Sure as hell, in Villa Boas' original description, he discussed there being something above the oval shaped craft that appeared to be spinning; in retrospect, the incident sounds a good bit like it could have involved some kind of helicopter, perhaps of a military variety that employs a variety of stealth technology that would lessen the sound of the helicopter blades (this fact has also been pointed out by researcher Mark Pilkington in his book Mirage Men).

With this in mind, if we give further consideration to Parker's description of the object, where he says, "It was hard to tell with the lights so bright, but it looked like it was shaped like a football," and that it made "very little sound" apart from a "hissing noise," similarities do emerge between the two incidents. Granted, rather than being definitive details about the two alleged craft, what the similarities suggest is that neither man got a very good look at the actual shape of the object, and in at least one of the two cases, it sounded a lot like a helicopter of some kind!

Another interesting parallel between Parker's narrative and the Villa Boas incident only came to light years later, when Parker began to express in interviews that he had apparently had additional "encounters" in the decades following Pascagoula. Parker also made the claim that many years later, his memories of the time he spent on board the aircraft in the original 1973 incident began to return, in which he recalled additional details that included a woman on board the craft, and that he was subjected to some variety of sexual examination while there. It's not as far out as what Villa Boas reported from his time with a woman on board a UFO... but the similarities here are notable, regardless. But why did Parker only recall this so many years later, and why so often do these alleged abductions bear elements that involve sexuality in this way?

Another lingering question involves why Hickson and Parker seemingly cooperated with the beings that attempted to bring them onboard the aircraft. As Parker recently recounted for the Ledger, "I think they injected us with something to calm us down," Parker said. "I was kind of numb and went along with the program."

Nick Redfern has also speculated recently about the possible role of mind-altering drugs in some UFO cases. Citing similar ideas proposed by researcher Rich Reynolds, he recently wrote about it here at MU, saying:

"Having known Rich for far more than a few years, I should note that he has a deep interest in the possibility that at least some significant UFO incidents may have had a hallucinogen of some kind at their core. We’re not, however, talking here about using LSD for recreational purposes. Instead, we’re talking about situations which may have been utilized – by military and intelligence services – to, in essence, fake a UFO event."

Faithful devotees to the idea of an alien presence, in relation to some of the more bizarre UFO events that have occurred over the years, will dislike such speculations presented here. However, the ideas should at least be given consideration, since they are of greater merit than the polarized views of hopeful Ufologists that have tossed all their chips in on an extraterrestrial hypothesis, or on the other extreme, the all-or-nothing skeptics who argue in every such instance that UFO "experiencers" are just liars, frauds, or publicity seekers.

Neither of these extreme views presents a truly objective assessment... something that will be required if we ever wish to understand the true circumstances behind some of these longstanding UFO cases.