The Mysterious Catacombs of Malta

Lying just off the southern coast of Italy is a small archipelago of islands that comprises the island nation of Malta. The country has a unique and colorful history, first settled in 5,900 BC and then passed through a succession of rulers over the millennia, including the Phoenicians, Carthaginians, Romans, Byzantines, Arabs, Normans, Sicilians, Spanish, French, and British, due to it Naval importance, and finally becoming a British colony in 1814, before gaining independence in 1964. With such a long history spanning back for millennia, Malta is known for its splendid ruins, historical monuments, and ancient sites, but one of these places stands out; a mysterious underground complex that holds with in it many enigmas and oddities that remain unsolved to this day.

The place known as the Hypogeum of Ħal-Saflieni, or also just simply the Hypogeum, was found quite by accident, when in 1902 some workers were digging cisterns at a housing development in the town of Paola when they broke through into what seemed to be an immense chamber of some kind. This chamber seemed to be part of some larger structure that had sat down there in the darkness away from human eyes for a very long time, but for some reason the workers decided to cover up their discovery, meaning that the true extent of this bizarre place would not be uncovered until later.

When word got out that there was a mysterious subterranean complex of unknown origin lying down there right under the town, archeologists were quick to swarm to it, and it would soon prove to be one of the most important and interesting archeological discoveries of the century. Dated to as old as 4,000 BC, it was and still is thought to be the oldest underground complex in the world, and here was a Neolithic structure that held temples, shrines, altars, vast warrens of tunnels that meandered off into the dark, burial chambers, all painstakingly cut directly into the surrounding rock and littered with countless objects such as statues, figurines, pottery, stone and clay beads, shell buttons, amulets, axe-heads, and many, many others. Yet, perhaps the most notable and macabre discovery down there in this ancient place long buried and forgotten down in the bowels of the earth were the remains of an estimated 7,000 individuals, along with numerous burial tools, leading to the theory that this massive complex was meant as a necropolis, or basically a city of the dead, a giant tomb.

It was already all a mystery as to who had built this place, how it had remained hidden for so long, and why it was packed with thousands of dead people, but these were by far not the only mysteries awaiting discovery in this dark, forgotten place. By far one of the most well-known mysteries of the Hypogeum is the discovery of numerous very anomalous skulls scattered amongst the many remains found there, and uncovered at what appears to be a sacred well adorned with statues of a goddess.

The skulls in question were immediately striking in that they were abnormally elongated and larger than normal human skulls, and further analysis showed that some displayed some kind of mysterious genetic abnormality, while others held evidence that their skulls had been intentionally bound to make them that way, similar to a practice among priests in ancient Egypt, Mesopotamia, and South America. A few of the skulls are very odd indeed, showing an inconsistent pattern of, and in one case a complete lack of, the cranial “knitting,” a line across the skull denoting the fusing of cranial plates, also called the fossa median, which are the plates of the skull that are separate in infancy and later join together into adulthood. This baffled the researchers who looked at them, as there is no known genetic abnormality or mutation in humans. Most of the strange skulls also demonstrated evidence of having undergone some mysterious surgical procedure, with three small holes drilled into the head for unknown reasons.

These bizarre skulls prompted wide speculation at the time, and still do. Why did these individuals have these mysterious elongated skulls and what was its significance? One of the earlier ideas was that these remains represented a whole new race of humans or a new mutation, while others suggested it had some religious implication or was some sort of sign of status. There was also the idea that these could have been settlers from Egypt, where the elongation of skulls was a documented practice, or were descendants from an unknown Maltese tribe or lost civilization. Other more far-out theories have been that these are the remains of ancient aliens or interdimensional travelers, while others say that they were attempts to enhance psychic abilities, or even that they were the remnants of the displaced population of the lost continent of Atlantis.

It is hard to say for sure because the skulls themselves have been so little-studied, and remain cloaked in shadow. After their discovery, 11 of the bizarre skulls were put on display at the Archeological Museum of the Valletta, after which they were suddenly removed without explanation, with access strictly limited, making it nearly impossible for anyone to adequately study them. Indeed, some of the only evidence that we have that they ever even existed at all are some photos and records by Maltese researchers Dr. Anton Mifsud and Dr. Charles Savona Ventura. Adding to the mystery is the fact that apparently several of the skulls have gone missing over the years, with only 6 of the original 11 remaining. What happened to the others? No one knows, and it has added a layer of dark government conspiracies and cover-ups upon the whole thing. As a result of all of this, the weird skulls of Malta have remained hotly debated and their exact origins unknown.

While we don’t know exactly where they came from or why they were there, these skulls are not even the most outlandish mystery of the Hypogeum. In the 1930s, a worker from the British Embassy by the name of Lois Jessop came forward with a truly bizarre account from down in the depths of the Hypogeum. She claimed that she had been exploring the ancient subterranean tunnels on a guided tour by candlelight when she came to burial chamber with a steep drop that plunged down into the murk. When she used her candle to look down through the darkness she claims that she saw something very strange down there in the abyss, and she looked down there as someone held onto her sash to keep her from falling, and would explain of what happened next:

I held my candle higher and peered down into the abyss, thinking that with this dangerous drop it was better not to go on further without a guide. Then I saw about twenty persons of giant stature emerge from an opening deep below me. They were walking in single file along another narrow ledge down below. Their height I judged to be about twenty to twenty-five feet, since their heads came up about half way on the wall on the opposite side of the cave. They were covered in long white hair, combed downward and shaggy looking. They walked very slowly, taking long strides. Then they all stopped, turned and raised their heads in my direction. All simultaneously raised their arms and with their hands beckoned to me. The movement was something like snatching or feeling for something, as the palms of their hands were turned down. 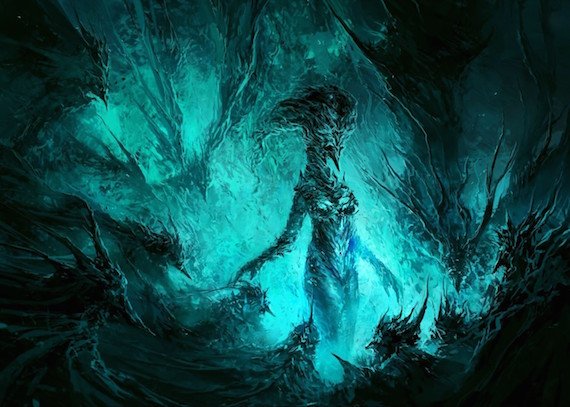 Things get even spookier a few weeks later, when Jessop claimed that there had been a group of 30 students and some teachers who had gone down into the very same chamber, only to mysteriously vanish after the cave collapsed behind them. Screams and cries for help could purportedly be heard echoing out from somewhere within for days, even as search parties looked and failed to find them, before finally giving way to silence. Their bodies were never found. After this, the government then supposedly went in and boarded up the tunnels, closing them to the public. Jessop’s tale was published in the publication The Journal of Borderland Research, but her veracity has been controversial since she would go on in later years to express an intense interest in UFOs and even become head of a UFO research organization. Was her account true, and if so what did she see down there? Who knows?

Other oddities of the Hypogeum have been uncovered in recent years as well. For instance, it has been found that the cave consistently produces sound frequencies that fall within the range of 110 to 111 hertz, which is known to have physical and mental effects and is too consistent to have been an accident. It is thought that this place was specifically chosen and designed for this effect, and that it served some as yet unknown purpose for these people or beings. With its air of mystery, unclear origins, unidentified remains, mystical features, and its otherworldly skulls, the Hypogeum of Malta, which managed to remain hidden from civilization for thousands of years, just may hold many of its enigmas for thousands more.