In Michael Crichton’s 1987 novel Sphere, the U.S. Navy assembles a team of scientists to study an enormous submerged object found on the bottom of the Pacific Ocean, an object which turns out to be an alien spacecraft inhabited by an intelligent alien entity named Jerry. Life may now be imitating art, if the claims of a group of treasure hunters are confirmed. While filming the Discovery Channel docu-series Cooper’s Treasure, a group of explorers and treasure hunters claim to have discovered a massive unidentified submerged object in the Caribbean ocean. Could this be evidence of ancient aliens lying undiscovered on the seafloor?

We'll see. But don't hold your breath. Explorer and treasure hunter Darrell Miklos claims to have made the discovery while he was scouring the area using maps given to him by former NASA astronaut Gordon Cooper. Gordon Cooper was an advocate for UFO research, and after his NASA career made several claims about witnessing unexplained aircraft or aerial phenomena and that the U.S. government actively suppressed sightings by military or space agency personnel. Cooper reportedly witnessed many anomalous dark shapes in the waters of the Caribbean while in space, and mapped these with the intention of later exploring the area for shipwrecks and lost treasure. Cooper’s Treasure sets out to determine if Cooper’s hunch might be correct.

While a few shipwrecks and minor caches of treasure have indeed been found - the Caribbean was historically a major shipping route, after all - this new discovery is something different entirely. So far, only the Discovery Channel and tabloids have run the story, so take it for what you will. Miklos told the Daily Mail that he was searching for shipwrecks in the areas identified by Gordon when he came across an anomalous structure or set of structures on the sea floor:

Miklos claims to have discovered identical formations in three separate areas of the sea floor which look unlike anything he’s found. The structures, whatever they are, lie 300 feet below the ocean surface and are covered in coral which Miklos’ team believes may be thousands of years old. The team also claims to have found many magnetic anomalies in the areas corresponding to the possible shipwreck locations marked by Gordon Cooper. The Daily Mail published images has of some of the ambiguous shapes which look like they might be manufactured, but then again might simply be odd-looking coral. 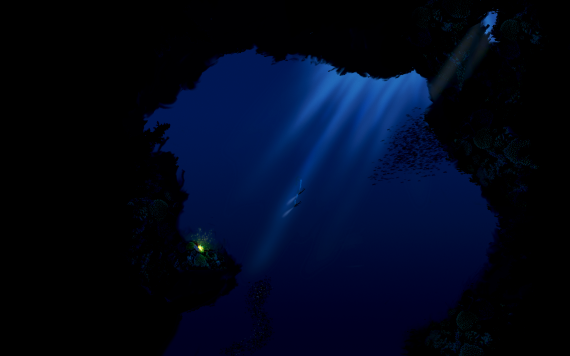 Might evidence of ancient aliens, or modern ones for that matter, indeed be lying on the bottom of the ocean? Then again, could this all be a ploy to build hype for a new cable TV series? Whether that may be, given that upwards of 80% of our planet’s oceans are still unexplored, there’s no telling what we might found in the deepest reaches of the Earth’s mysterious waters. Should NASA and other space agencies turn their attention towards underwater exploration before we attempt to conquer the stars?

Bigfoot, Mysterious Men, and the Occult