She’s ba-ack! The woman who claimed in December 2017 that she’s given up on flesh-and-blood men after having sex with at least 20 ghosts has a new announcement – she’s found the ghost of her dreams and wants to have ghost babies or ghost-human hybrid babies with him. Is that even possible? Wait a minute … it’s been 8 months since she came out of the ghost-o-sexual closet. Could this be her cute way of announcing she’s pregnant? What will the baby reveal look like – pink balloons for a girl, blue for a boy and white for a ghost?

“One day, while I was walking through the bush, enjoying nature, I suddenly felt this incredible energy. I knew a lover had arrived.” 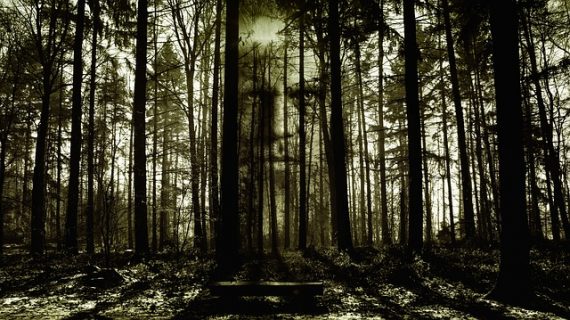 Well, that answers the question of where you find a ghost worth dating and it’s not on Tinder or OK Casper. Amethyst Realm, a self-described spiritual guidance counselor from Bristol, England, revealed in December that she broke up with her fiancé about 12 years ago when he was away too often and a ghost snuck into her bedroom and made her forget old what’s-his-name. One was enough for Amethyst to get stuck on spirits and she managed to hook up with twenty who were sheet-worthy. However, none of them appeared to be father material, so she took a trip to Australia where she found what she was looking for on a walkabout.

“It’s pretty serious. In fact, we’ve even been thinking about having a ghost baby. I know that sounds crazy but I’ve been looking into it and I don’t think it’s totally out of the question.”

How serious? Amethyst says the Misty Right ghost (no names mentioned – is she trying to hide his identity?) traveled back to England with her (now there’s a way to keep people from sitting next to you on a plane … “No, this seat isn’t empty – this is my new boyfriend) and she’s been trying to figure out how to get pregnant. Actually, she may already be with ghost-child because she says women impregnated by ghosts often don’t know it and don’t have the baby because they don’t carry it to term. She also claims that phantom pregnancies may possibly be ghost pregnancies.

Does this work in reverse? Can female ghost become pregnant after sex with a human male? How would that happen? What movie do they watch on Netflix to chill – “The Ghost and Mrs. Muir”? And what about Amethyst’s Australian ghost boyfriend? Does he make her get him a pale ale before they watch “Crocodile Dundee?”

Amethyst Realm is not the first person to claim to willingly have sex with a ghost, and she most likely won’t be the last. If it's true, she may be on to something big. Before you know it, there will be dating sites for ghost-seekers. The tough part will be getting clear photographs to convince potential partners to swipe right.

A Strange Case of a Real Vampire in England