YouTubers Are Opening Haunted Dybbuk Boxes from the Dark Web

I was born into the first generation to grow up with the internet, but even I don’t get a lot of the new web and social media trends out there, particularly those found on the wretched hive of scum and villainy that is YouTube in 2018. Are there no lows too low for YouTubers to stoop to in order to gain a few more subscribers? I mean I get it that a lucky few vloggers  have somehow managed to leverage the video-sharing platform into overnight fame and fortune, but for the most part the whole concept of YouTube vlogging just seems so desperate.

Now, one of the newest YouTube trends to spring up could have more far-reaching consequences if one internet urban legend is to be believed. YouTubers are now buying mystery packages off of the Dark Web and opening them contents unknown on camera - mystery packages which include so-called haunted “Dybbuk boxes.” If you’re unfamiliar with the Dybbuk box, check out our Brent Swancer’s take on the tale.

If you search YouTube for “dark web challenge” or “deep web challenge,” you’ll find scores of these videos. Most of the mystery boxes opened in these brain cell-killing videos contain unknown narcotics and narcotic-looking substances, stained clothing, Nazi paraphernalia, or electronics scrap. A few though, seem to contain objects or substances used in occult or voodoo rituals, even Dybbuk boxes, the haunted boxes or cabinets alleged to house evil spirits which served as the basis for the (unwatchable) 2012 Sam Raimi film The Possession.

In one of these videos, painfully obnoxious YouTuber ImJayStation opens a “dark web challenge” box allegedly containing four different Dybbuk boxes. ImJayStation refuses to open them, so unfortunately his subscribers didn’t get a chance to watch his punchable, tattooed face melt into goo as ancient evil spirits spewed forth into the world. Maybe hopefully next time. 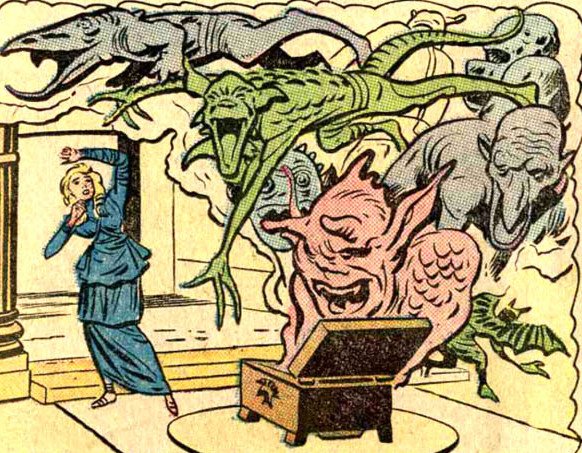 Then again, maybe we should let natural selection take its course.

A Lost Eighth Wonder of the World Has Been Found