A Haunted Extinct Volcano in Oregon

Looming over the landscape of Malheur County, Oregon, is the extinct volcano known as Malheur Butte, once known as Kennedy Butte. Immediately recognizable for its distinctive shape, carved over millions of years by erosion, this landmark stands like a tower over the surrounding flat plains, and has long held a place in the lore of the Natives of the region, who often used it as a lookout point to survey the area. This was once a dwelling for ancient spirits, a realm of magic, and while the volcano itself is long dead, the legends and mysteries surrounding this place are still very much alive, and have persisted right up into modern times.

One of the most persistent legends associated with this place is that it once was a place where witches from across the land would gather to carry out dark, arcane rituals, with both the volcano and the nearby Snake River being seen as some nexus point of mystical energy. These witches were often blamed on the large number of travelers said to go missing in the area to never be seen again, taken away for inscrutable, sinister purposes. There is at least one report of seeing a gathering of hundreds of witches near the base of the butte, who cavorted about and performed gruesome human sacrifices. Witches have been reported lurking about the butte right up into modern times. One local said in Donna Stewart’s book Ghosthunting Oregon, thus:

I’ve heard about the witches since I was a boy, and I was always told not to go to the butte after dark. So of course I did! Can’t say I’m positive I saw witches, but more than once I’ve seen robes, long robes that flap in the wind, more than one. Sometimes women laughing, but not in a funny way…. more of a serious kind of laugh. I don’t know. I know each time I left pretty fast! I think they are witches, either ghosts of witches or living witches. I don’t have the intention to interrupt them either.

Whether any of this is true or not, it is not the only strangeness associated with this place. One of the more commonly reported paranormal phenomena at the butte is that of small, impish shadow people, about the size of a small dog, which are said to dart about the area and hide behind rocks or on occasion even chase visitors away, even running after cars. These mysterious creatures are often described as being more or less humanoid in general shape, but with scrawny, long limbs, oversized heads, and slightly elongated faces, and are sometimes reported as emitting a shrill squeal or howl.

One account of these imps given to me was of a witness who was out camping in the area in 2010 when something pretty weird happened out there in the wilds. The witness claims that on their first night there they had heard something rummaging about their camp and scurrying about. Thinking it was just animals they thought nothing of it, but upon waking up in the morning there was camping equipment that had been carefully piled up, as if someone had stacked it up intentionally, even though no one there had done it. The next night, they heard the same sound and this time the witness stuck her head out of the tent. She would say of what she saw thus:

Something scurried through the campsite. I thought it was a raccoon or something but it stopped and turned to look at me. Its face was humanoid, glowing eyes, and it stopped in its tracks as soon as I came out. It looked at me and I could see that it had a face sort of like a person, but with certain dog-like features and of course those glowing eyes. Then I became aware that there were more of them about, and that they were circling the camp. It was very obvious to me at the time what had messed with our camp the night before. 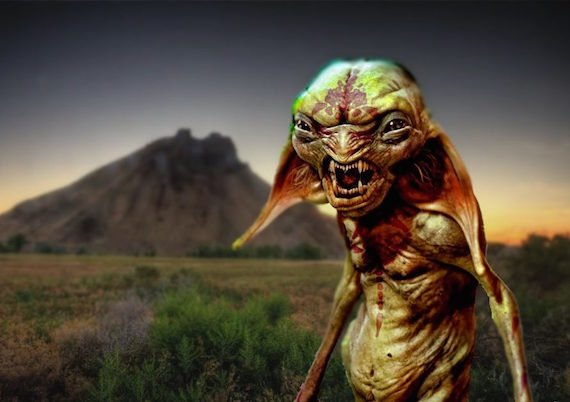 The next day the frightened campers left and never came back. What in the world are these black imps that have been reported, and do they have any association with the reports of witches in the area? It is hard to say. Some paranormal investigators have made their way to the butte as well, and some of them have come away with some of their own strange stories to tell. One is a witness named Kelly Kuykendall, who went out there to see for himself what was going on. He would say:

So I went on a quest with my wife and daughter and freind of hers to the most haunted places in eastern Oregon. One place we went was Malheur Butte in Ontario Oregon. ( Found it on Shadowlands index ). It was about 10:30 PM. All dark on a hill at the base of this retired volcano. When I saw a white cloud go by the base of the mountain going west. All I had was a digital voice recorder. My daughter had the digital camera and was taking pictures out the open window that was facing west. ( They were too afraid to get out of the car.) A couple of minutes after I saw the white cloud race by, my daughter caught a picture of what I beleive to be a ghost of maybe a man. ( Shadow figure ). She called me to the car to show me what she had captured. After seeing the picture, I went back outside with the digital recorder. I asked if he had been killed and there was no answer. I said that I heard there was a lot of witches rituals going on around hear in the past. Were you sacrificed? Immediately afterwards I caught a "Nope" on the digital recorder that I did not hear with my own ears. It was plain as day and a male voice.

I was out in the desert with 3 females. I was the only male and it was not my voice. So my point is, I am now convinced that there are truly ghosts.

There have been many theories as to why this place should attract so much paranormal activity, ranging from the composition of the rocks to the presence of water nearby in the form of the Snake River, but what does any of it really mean? What is the significance of the shadowy imps and what connection do they have, if any, to the reports of witches here? There is no real way to know, and the mysteries of the Malheur Butte will likely swirl about for many years to come.