A Mysterious and Dangerous Unsealed Ancient Vault in India

Lying within Thiruvananthapuram, in Kerala, India, is a grand structure known as Padmanabhaswamy Temple, with the name derived from the word Padmanabha, meaning “One emerging from the lotus.” Dating back to at least the 6th century and steadily renovated throughout the 16th century by the Kings of the Travancore Royal Family, it is one of the 108 temples of Vaishnavism, or the worship of Vishnu, one of the main deities of Hinduism. Indeed, the lavish temple prominently displays an enormous statue of Vishnu depicted in an unusual reclining position upon the five-hooded serpent Anantha, or Adi Sesha, with the whole thing measuring 20 feet square and carved from a single vast slab of stone. This is already quite a grand place, with its unique architecture, its massive statues and ornate sculptures, and copious amounts of gold leafing and a gold plated exterior. It also holds a dark and ancient mystery that has remained unsolved to this day, and mysterious doorway that has remained sealed for centuries and leads to the unknown.

Padmanabhaswamy Temple has featured heavily in lore and literature, especially within Sangam Tamil literature and poetry, where it was often depicted as having once been a wondrous place full of vast riches and with walls crafted from gold, and known as one of the the richest temples in the world. Yet in addition to its sheer splendor, it is also a place of great mystery, with its exact year of founding unknown and much of the complex unexplored or kept secret from the outside world for hundreds of years, and in recent times it has been found to be even more impressive and mysterious than it already was.

In 2011, the ancient temple was finally explored more thoroughly after long being mostly closed off entirely from the outside world by the secretive royal family of Travancore, and it was found to house 6 massive sealed underground vaults, labelled A to F, and all closed off with ornately designed solid iron or granite doors that were locked tight and seemed to be utterly immovable. It appeared that they had never been opened by the priests of the temple, and it was completely unknown as to what was there in the ancient darkness beyond. At the time these doors and the mysterious vaults that lie behind them captured the public imagination, and the media watched every new development carefully as preparations were made to enter and catalogue the contents of these forgotten places. Much speculation swirled at the time as to what would be discovered within, with ideas ranging from that they would find mere dust and bones, others who surmised they held unfathomable riches, and others still certain that they held curses or even the secrets of the universe. Nobody knew as crews began trying to open them.

Getting the formidable vaults open would quickly prove to be easier said than done. Starting from vault A it was immediately apparent that these were protected, forbidden places not meant to ever be opened, and very likely intentionally sealed for the rest of eternity, and it took nearly a full day of nonstop effort with modern equipment to pry the first vault open, which held within it a vast trove of treasure beyond perhaps anyone’s expectations. There glittering in the murk were jewels, coins, gold and silver bars, solid gold idols and figurines, diamonds, gemstone encrusted artifacts and ceremonial garb, ornate jewelry, over 2,000 pounds of gold coins, and a massive gem and diamond studded golden throne. One of the members of the government committee sent to oversee the project would say of the breathtaking sight:

When the granite slab was removed, almost absolute darkness prevailed behind it – it was diluted only by a dim ray of light from the doorway. I looked into the black pantry, and I saw an amazing sight: like stars shimmered in the sky on a moonless night. Diamonds and other precious stones flashed, reflecting the faint light coming from the open door. Most of the treasures were stacked in wooden chests, but eventually the tree turned into rubbish. Precious stones and gold simply lay in piles on the dusty floor. They were not really arranged systematically. There were baskets, some earthen pots, some copper pots, and in all these things, these things were kept. It was a magnificent experience. There are no words to describe it. I have never seen anything like this. 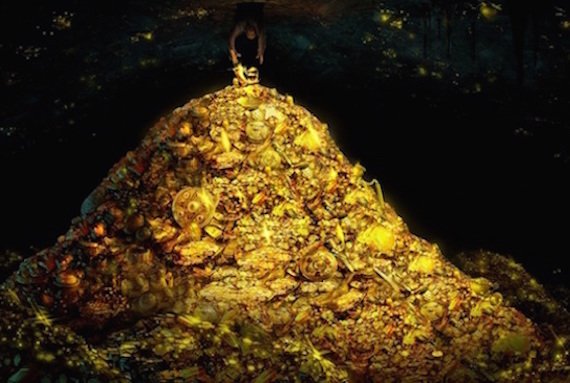 Other vaults in the temple would prove to be equally as hard to open, yet also bursting with mind-boggling amounts of lost treasure, until an estimated $22 billion dollars’ worth of loot was eventually catalogued from the vaults, all thought to be the result of the accumulation of thousands of years of donations and gifts to the temple and its deity from Kings and dynasties across the land. Yet for all of this amazing wealth uncovered, although 5 of the vaults were opened, one remained stubbornly resistant to all efforts to disgorge its secrets. Vault B, also called Bharatakkon Kallara, is unique amongst the others, considered to be a Holy repository closely associated with the Deity Vishnu and with an exceptionally sturdy solid iron door lacking any nuts, bolts, locks, knobs, or latches, and adorned with the image of two gigantic cobras on each side denoting it as a special and sacred place indeed, and it is not even included in the official temple inventory. Initial efforts to open Vault B met with failure, and indeed its secrets remain sealed away to this day.

There are many strange stories, rumors, and legends associated with the mysterious Vault B. One is a legend that states that the door is impossible to open by any earthly means, that it had been in fact sealed by a mystical spell and mantra that could only be undone by the one who had cast it or an equally powerful priest. If a proper counter spell called a “Garuda Mantra” is uttered, it is said that the door will magically unlock and open to disgorge its secrets. Additionally, anyone who tries to forcefully open the door is rumored to be cursed for trying, and that to actually force it open is to flirt with unimaginable catastrophe. Indeed, it has long been rumored that many of the original committee tasked with trying to divulge the chamber’s secrets have met with freak accidents and misfortune, further bolstering the idea that the vault is cursed.

Another persistent rumor is that the vault is protected by a spell called a Naga Bandham, or “snake binding spell,” which is said to conjure up the protection of serpent deities. According to this tale, anyone who tries to enter the inner sanctum of the chamber will incite the fury and wrath of these snake spirits, and there is one unverified account of this in action. In the 1933 book Travancore; a guide book for the visitor, author Emily Gilchriest Hatch describes a harrowing incident in which some people visiting the temple tried to pry the vault open in 1931, only to find it crawling with countless venomous snakes that sent them running in terror. In this curse, it is said that a particular set of soundwaves at a specific frequency is to be aimed at the inner lock mechanism, which will supposedly disengage the curse and open the door. 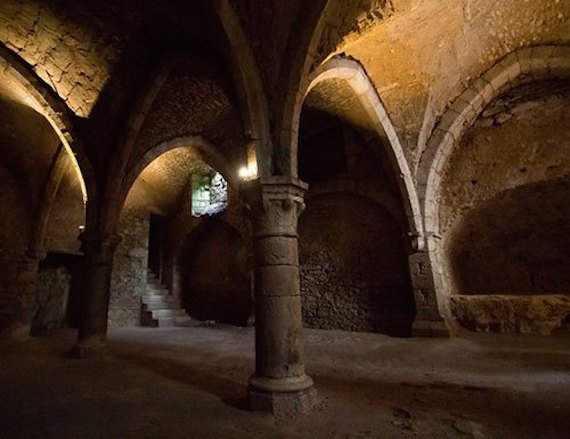 Yet another rumor is that the door to the vault issues forth the sounds the crashing waves of the sea, leading to the idea that it is attached somehow by a secret tunnel to the ocean. According to this story, opening that door could very well unleash a catastrophic flood that would inundate all of Kerala, and that it is best left untouched. In every one of these scenarios we have curses, misfortune, death, cataclysm, and deadly snakes, but while these may just be legends the fact remains that Vault B has never been opened. What lies within it? Some say that it holds a treasure the likes of which the world has never seen, and there is also the theory that is contains tomes of magical and esoteric knowledge, but no one really knows. The only one said to understand the secret of this mysterious locked chamber is Uthradom Thirunal Marthanda Varma, the head of the erstwhile royal family of Travancore, and he has vowed never to reveal it.

The soundtrack of Indiana Jones is playing in you head now, isn't it? For now, the mysterious Vault B of Padmanabhaswamy Temple keeps its ancient enigmas buried within it, and it is one of the most heavily guarded and monitored places on the planet. Here heavily armed guards and state of the art surveillance equipment keep watch on it and the other vaults, although despite this it is estimated that millions of dollars’ worth of treasure has “disappeared” from here since it was made known to the outside world, and it is even believed that Vault B may have very well been raided in past eras through some as yet undiscovered subterranean tunnel. What will happen if this ancient place is ever opened? Will we find treasure beyond our wildest dreams, or curses, cataclysm, and black magic? Can it even be opened at all by any means we possess? We may never know.