Are extraterrestrials watching the current president … or at least keeping an eye on his cherished Scottish golf course while he’s away? That’s one of the possible explanations for a report with a photo of four UFOs flying over the Trump Turnberry resort in Ayrshire, Scotland. There are plenty more, although not enough to make a tell-all UFO book … yet.

It was on August 16 at 7:55 pm that the photograph of the alleged UFOs was taken as they appeared to fly or hover over Turnberry, one of the three courses at the resort located on the coast of the Firth of Clyde in South Ayrshire in southwestern Scotland. According to The Scottish Sun, an unnamed (what a surprise) person described as a “golf fan” emailed the picture taken by an equally unnamed relative of his. (See the photo here.)

“My niece was at Trump Turnberry golf course and took a picture of the golf course from the balcony of her room. She emailed the picture because I like to play golf, and when I looked at it closely I saw 4 strange disc shaped objects in the background which she said she had not noticed when taking the picture. Can you help me identify these ufos? Any ideas?”

Not surprisingly, there are plenty of ideas since Scotland has a number of famous UFO encounters, the president has seemingly been followed by UFOs before and … “Space Force!” Scotland has the Robert Taylor Incident or Dechmont Woods Encounter (Taylor claimed an attempted abduction), a recent sighting over Kippen (looks like a kite with a flare or sparkler) and a number of them in Bonnybridge, part of the so-called Falkirk Triangle which averages around 300 UFO sightings per year.

During his campaign, then candidate Trump was followed by a UFO while in his helicopter and by two while flying from New York to Washington for his inauguration. And of course, he recently announced plans for a “Space Force” to conduct space warfare, which may or may not include battles with extraterrestrials. The president was not at the golf course on August 18, so the UFOs photographed then were likely not part of a security detail or drones trying to capture pictures -- before being shot down by the security detail or the Space Force.

So, what are the UFOs in the golf fan’s photo? The top vote-getter is reflections of interior lights in the window. That’s possible, although the photographer seems to be close enough to the balcony rail to suggest she was outside. Since she didn’t see the UFOs while taking the picture, bugs, birds or lens anomalies are also possibilities. 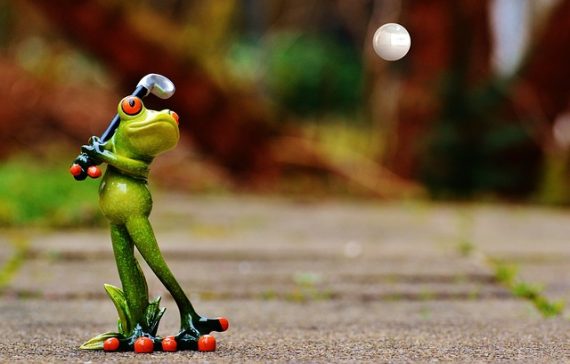 It’s unlikely that the president will have any comments on the UFOs. Any thoughts on what they might be? Anything that will move the needle which is currently buried at ‘reflections’? Do ETs play golf? Would you welcome ETs at this time? Would the president?

A Sinister Haunted Road in England