Winding along the breathtakingly scenic Puna coastline of Opihikao, on Hawaii Island in Hawaii, is what is called Kalapana-Kapoho Road or more commonly the Red Road, which meanders along through the rugged landscape of cliffs, lava outcroppings, waves, and the azure sea, and at one point passes a 13-acre expanse of ironwood trees called MacKenzie State Park, part of the Malama Ki Forest Reserve. With its gorgeous vistas and peaceful atmosphere, the park is a popular place for visitors to enjoy picnicking, hiking, fishing, camping, and other outdoor activities in a secluded, quiet environment. However, while it is undoubtedly a place of great solitude and beauty, MacKenzie State park is also known for its rather dark history and its sinister reputation as being one of the most haunted places in Hawaii.

While the park itself was officially established in the 1930s after the park’s namesake, ranger Albert J. MacKenzie, planted a grove of ironwood trees here, the history the area goes back to the 1800s. In the 1850s numerous prison convicts were brought here from Honolulu for the purpose of working on sugar plantations, clearing land of the thick jungle undergrowth, and maintaining the historic coastal trail called “The King’s Highway, originally built by the former Hawaiian ruler King Kamehameha the Great in the early 1800s, and which served as a major path for crossing the island at the time. At this point the area was already long said by the locals to be haunted by restless spirits the Hawaiians called the ‘uhane, as well as by spectral processions of ghostly figures with torches and drums, called the “Night Marchers,” who were said to come out on nights of the full moon and unleash battle cries. Yet, with the coming of the prisoners the area would take on an even more gruesome reputation.

Working conditions here were less than ideal, with the inhospitable terrain, lack of clean water, disease, and harsh treatment they suffered all taking its toll. It is said that hundreds of these prisoners died over the years, their bodies typically unceremoniously buried in unmarked graves out in the wilderness. The ghosts of these prisoners have ever since been said to roam the park, typically appearing as the apparitions of filthy, pale, and bedraggled looking phantom men, sickly and thin, wandering about carrying various work equipment, only to vanish into thin air. There are also frequent reports of hikers hearing footsteps behind them when no one is there, or of seeing shadow figures moving about in the trees as if following them, and dogs are allegedly spooked at unseen threats or downright too terrified to go anywhere near the area.

These spectral prisoners are also said to prowl about outside of the tents of campers in the park, whispering and walking about only for the tent occupant to look out and see no one there, and they have even been seen to set up their own camps, complete with campfires, which fade out of existence if one is to approach. More frightening reports describe screams and groans emanating from the darkness, tents being shaken, or apparitions of the prisoners appearing within tents to attack the occupants before vanishing.

A Hawaiian paranormal research organization called the Kahuna Research Group investigated the park in 2013 and allegedly witnessed all manner of strange phenomena, including weird EVP readings, strange anomalous images caught on camera, and even purportedly making contact with some of these spirits. One was apparently the ghost of a Portuguese prisoner called “Louie,” which allegedly spoke to the group via one of the team members, a spirit medium named Marcie Grover. She would say of this encounter:

I immediately made contact with a spirit named "Louie" or "Louis", who I sensed was a Portuguese prison laborer from the crew who built the park in the 1850s. He indicated there were four other such spirits there with him. He had created his own "Purgatory" and would not "go to the light" due to his Catholic upbringing. He indicated he had killed a fellow laborer due to lack of provisions. I believe he died a few weeks after that incident. After hours of seemingly playing "tag" with the spirits, someone suggested we go completely dark and use the small indicator lights on the ion detector only to note activity... and we had immediate success. I asked the spirits if they could light up the device once for yes and twice for no and we again had an immediate response. The device remained blank when no questions were asked.

Adding to the park’s ominous reputation and its ghosts are all of the strange accidents and crimes that have occurred here over the years, to the point that rumors have spread that it is actually a cursed place. Perhaps the most famous incident occurred at the park in 1980, when a couple was camping here and were attacked one evening by a mysterious intruder, who savagely beat them, killing the man and seriously injuring the woman. No suspect has ever been found, and there has never been determined any motive for the gruesome, senseless crime. In 1993 there was also the tragic death of a 16-year-old girl, who was beaten and raped by three men before being thrown over a cliff into the sea while she was still alive. Her body has never been found. 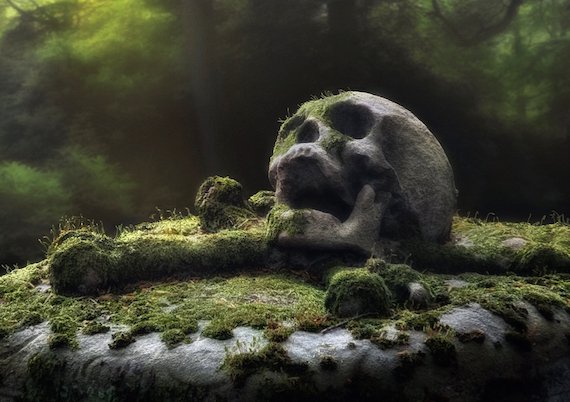 In 2008 there was the strange case of the body of a local surfer found at the base of a cliff by the cast and crew of the film The Tempest, which was shooting on location at MacKenzie State Park. The man had reportedly been shot many times, but no one has ever been arrested in connection with the crime. On top of these unsolved crimes are the many drownings that have occurred here over the years, although this is most likely due to the rough waves and strong currents. There are warnings posted against swimming, but people do it anyway, and fishermen on the rocks are sometimes swept out to sea by sudden powerful waves, with many of the bodies never found.

All of this death and violent history stands in stark contrast to the otherwise enchanting beauty of this place, and also ensures that there are plenty of spooky rumors and phenomena to go around. In addition to the ancient spirits, Night Marchers, and apparitions of dead prisoners here, mysterious lights or fireballs are often seen floating about through the twisted and gnarled ironwood trees or even bobbing about on the waves of the nearby sea, and there are many reports of voices and howls issuing forth from the area’s many lava tubes. It is all rather interesting considering that with the sheer natural splendor of the park it looks more like something out of a travel brochure, and one of the last places one might expect to be so intensely haunted. Indeed, many visitors have no idea about any of this, making it all the more startling when they encounter these strange phenomena for themselves. Whether any of the stories of ghosts are true or not, MacKenzie State park is certainly a place of great beauty under which a certain darkness pulses.