The bane of those who believe that the legendary King Arthur and his Knights of the Round Table really existed is (apart from the constant quotes from Monty Python productions) that there is no indisputable evidence of Arthur or the Round Table, let alone Excalibur, Merlin, the Holy Grail or any other elements of the various tales. Now a British celebrity claims he has proof that Arthur was real and convened 5,000 knights around a round table in the Roman amphitheater once standing in the Gloucestershire town of Cirencester. Will this evidence close the book on Arthur or open a new play by the Pythons?

“Me and a professor at Bristol University reckon Camelot is in Cirencester – and we can prove it.” 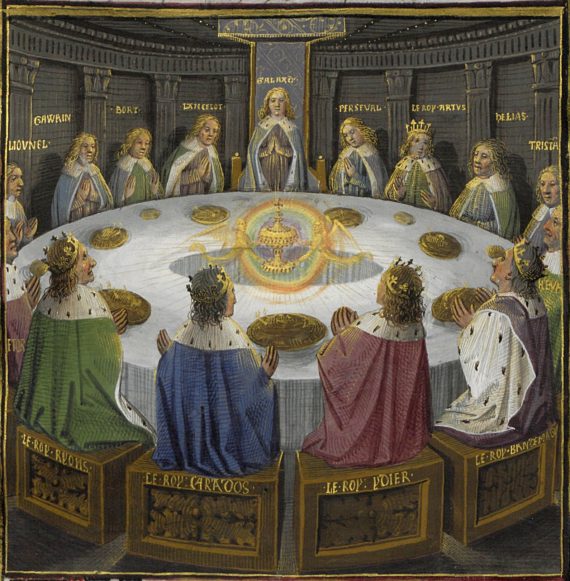 The celebrity is Nick Knowles, known is England as a game show and reality show host. That obviously makes him an expert in everything, but in this case Nick Knowles is smart enough to drag in an alleged real expert to confirm this claim he made on the BBC television magazine, The One Show. Knowles assertion is centered in the amphitheater located in Cirencester, 80 miles (130 km) west northwest of London in the Cotswalds. Known originally as Corinium, remains and artifacts, including the partially-exposed amphitheater, show the city as a major trading center dating back to the early Roman era. A fort was built there around 49 CE but was shut down in 70 CE and a basilica and forum took its place.

The Cirencester Amphitheatre (image here) appears to have been built in the second century. It measured 150 feet (46 meters) by 135 feet (41 meters) and was 25 feet deep for seating. The tiered wooden seats could accommodate around 8000 fans, a sizable number considering the peak population of Cirencester at the time was 10,000 residents. (For comparison, the Roman Colosseum was 188 meters (616 ft.) by 156 meters (512 ft.) for the building and 86 meters (282 ft.) by 54 meters (177 ft.) for the arena.) Like other Roman amphitheaters, it was used for gladiator combats, executions (possibly feeding Christians to lions) and venationes or animal slayings – the site is known as the Bull Ring, which suggests it may have hosted bull-baiting events where a bull was tied to an iron stake or placed in a hole, had its nose filled with pepper and was attacked by dogs (hence the name “bulldogs”). Those fun-loving Romans!

The fun ended in the 5th century when the amphitheater was turned into a fort to protect Cirencester from the invading Saxons. That would be an appropriate time for a King Arthur to assemble 5,000 knights in the round to prepare for battle. What about the Round Table, with Gawain, Galahad, Lancelot and the rest bellied up to circular wooden furniture like in the paintings and movies? That’s where Knowles (you remember him – the guy who has proof that all of this happened?) brings in Camelot historian and professor Chris Gidlow, who also believes the Round Table referred to a gathering of thousands of knights. While he doesn’t appear to say directly that it was located in Cirencester/Corinium, it’s the only amphitheater in the area which could possibly hold that many knights.

What other proof does Knowles have? Unfortunately, he doesn’t reveal that in the interview. Since he’s the longtime host of a do-it-yourself home makeover show, perhaps he has some construction artifacts with Arthur’s stamp on them. Whatever it is, Knowles needs to provide it to the public, along with proof that the entire Athurian story is real, or Monty Python’s will continue to be the account of the Round Table that most people remember.

Scary Accounts of Real Monsters in the Closet