It was fun poling holes in the recent story about a tiny hole poked in the International Space Station which an astronaut held his finger over until Russian cosmonauts patched it with a modern version of chewing gum and duct tape. Funny stuff … until it was revealed that the hole was not the result of a micrometeorite impact but an accidental drill hole made by a Soyuz contractor who himself had patched it up so the capsule could pass inspection. Unfortunately, that wasn’t the end of it. Further inspections by the crew have found evidence of more mysterious drill dents and unexplained scratches … this time on the outside. Don’t shout “Aliens!” … yet.

"Traces of drilling have been found not only inside the spacecraft’s living compartment, but also on the screen of the anti-meteorite shield that covers the spacecraft from the outside and is installed 15 millimeters away from the pressure hull."

That chilling revelation was given to the TASS news agency by “a rocket and space industry source.” Prior to plugging the two-millimeter hole discovered after pressure began to drop in the ISS on August 30th, cosmonauts conducted an extensive examination of the area surround it both inside and out. Photo and video images taken of the outer hull using an endoscope (that cheer you just heard was from gastroenterologists) showed more evidence of non-reported-or-repaired drilling.

"During the analysis of those images, traces of drilling were found on the anti-meteorite shield … the top of the drill came through the pressure hull and hit the non-gastight outer shell."

With that discovery, the finger-pointing began. The non-gastight anti-meteorite outer shell is the last piece installed before the spacecraft is taken to the final assembly workshop. Another anonymous source (see, the Russians use them too) gives this evidence:

"When Soyuz MS-09 has just arrived to the final assembly workshop, it was photographed in details. No hole and no signs of drilling… were found. The spacecraft was drilled later, when it was fully assembled.”

Photographs of the anti-meteorite shield taken when it arrived also showed no damage. That implies the drilling scratches and dents were made at the very end of the assembly cycle or during the 90-checkout. Hmm. How did none of this get caught during the entire 90-day inspection? Have they not heard of fine-toothed combs?

The sources don’t believe the damage occurred while the Soyuz was moved to the Baikonur space center in Kazakhstan or when it was connected to the rocket and placed on the launch pad.

This additional information seems to have been released AFTER a commission consisting of specialists from Roscosmos, the Energia Rocket and Space Corporation and the Central Research Institute of Machine-Building completed their investigation and Roscosmos director general Dmitry Rogozin said the damaged materials would be studied "for as long as it takes" but "within reasonable limits." 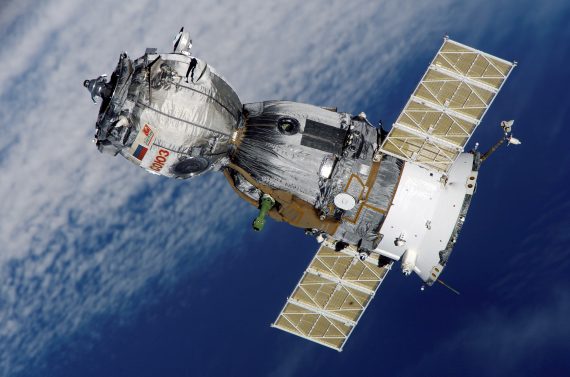 Within reasonable limits? This is the only vehicle in use for transporting crew member to and from the ISS. Would he feel the same way if it was a NASA-made capsule … or Musk-made? How quickly would they bring up the pot-smoking? NASA chief Jim Bridenstine contacted his Russian counterpart and offered assistance to continue the investigation, identify all of the parties involved in this serious problem and insure that the crew can return safely.

It’s not aliens. However, if it’s someone paying the contractor to sabotage the ship or the ISS, who might that be? And why?