Cattle mutilations are one thing, but when household pets start getting mysteriously and gruesomely butchered, things get a lot more emotional. Law enforcement agencies in Tompkinsville, Kentucky are searching for clues in a series of animal killings in the Bill Butler Spur area of Monroe County. Three miniature horses, a husky, and a pit bull were all found dead with their throats ripped open, while a third dog survived what appears to be a similar attack with only superficial wounds. Who, or what, could have done such a thing?

As of now, there are no definite leads and reports coming from of the Monroe County Sheriff’s Department are confusing. Law enforcement officials initially reported that “all signs show that it possibly could have been done by a large cat/ animal,” but Sheriff Dale Ford later said that the animals were shot. Why the change? Merely a misinformed sheriff, or an attempt to keep the public calm in light of a terrifying and mysterious beast on the loose? 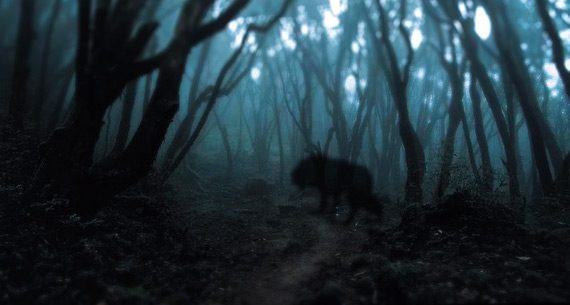 Whatever the current explanation is, the Monroe County Sheriff’s Department warned residents through their Facebook page that whatever or whoever is out there butchering animals, it or they could still be out there:

We highly advise you to please keep a close eye on small children and animals when they are let outside and use caution and be aware of your surroundings.

Naturally, comments on Facebook have run the gamut from the sympathetic to the outlandish. “I live on top of the rock quarry and this happened about a mile from where I live. You wouldn’t believe the stuff I see around those woods . I keep my mouth shut bc people would not believe me if I told them” wrote one woman. “Bigfoot got ahold of some very potent bath salts” writes another man, while one commenter seems to suggest that something more supernatural might be afoot:

Sounds like bad moon shine. I got some that was bad years ago and I woke up naked and bloody in the woods with a half eaten bear leg.

While Bigfoot tripping balls on bath salts and transfiguration through bad moonshine are hilarious images, there’s nothing funny about murdered pets. Is this merely a case of a sadistic criminal with a taste for animal blood, or might this be yet one more sign that anomalous big cats are on the prowl nationwide? Which is more frightening?