One of the strangest news stories of 2016 was the spate of unexplained sightings of clowns. For some reason, mysterious figures dressed in creepy, sometimes macabre clown outfits began appearing throughout North America. It began with “Gags the Clown,” a balloon-wielding clown who was photographed prowling the nighttime streets of Green Bay, Wisconsin in August 2016.

Images and accounts of Gags sightings went viral on Facebook, which is likely the reason for copious copycat clowns continuing to creep people out well into 2017. Sometimes the clowns chased children with weapons, causing police in some states to issue warnings about the unexplained appearances. After the release of the most recent adaptation of Stephen King’s IT was released in September 2017, the clown appearances seemed to dwindle, possibly (or probably) indicating that at least some of these sightings could have been part of some type of viral marketing campaign.

However, a new sighting on the outskirts of London may indicate that creepy clowns are back. In Joyden’s Wood, an ancient woodland between London and Kent, police received reports of a clown shouting “run or die" at a pair of terrified boys riding their bikes through the rural area. The boys saw the clown brandishing something which appeared to be a knife before riding away as fast as their shaky legs could pedal.

Following the incident, a Kent Police spokesperson issued a statement informing the public of the incident but offering no real details on who or what may have been behind it:

Kent Police was called at 6.46pm on 14 September 2018 to a report of a person dressed as a clown in Tile Kiln Lane, Dartford. This person was reported to have spoken to two young boys on bicycles. The boys left the area before the incident was reported to the police. Patrols in the area were advised of the incident but no person matching the description was seen.

If you really want to attack people, though, why dress up in one of the most conspicuous outfits around? It’s a good thing this “killer clown” wore makeup and (presumably) a bright red wig and gave the kids a verbal warning - and probably shows that this isn’t actually a case of a “killer” anything but instead merely a prank in poor taste gone too far. 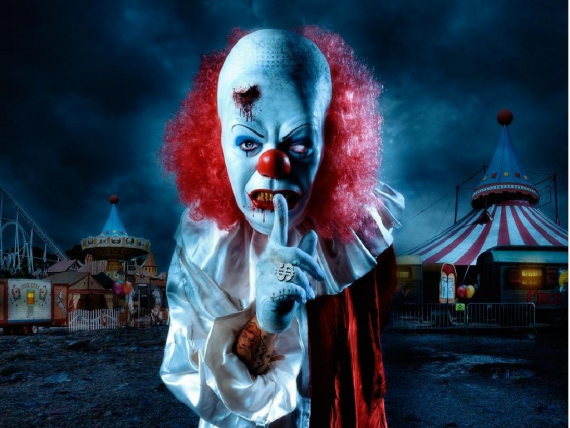 And what do you know - It: Chapter Two is set to be released nearly one year from now on September 6, 2019.  Are these recent sightings all to generate early buzz for the next installment of the clown horror film, or might something truly stranger be actually afoot?