Come on, universe, what’s a guy gotta do to get just one little shred of evidence of extraterrestrial life? It doesn’t need to be anything too extraordinary. No antennaed green humanoids, no crawling masses of purple ooze, no silicon-based crystal creatures. At this point I’d be content with a single dead microbe clinging to the side of a meteor. I’m not picky - I just need to know: are we alone?

Of course, I’m not alone in my need to know. The search for alien life currently involves some of the most sophisticated astronomical equipment and laboratories on Earth, but has still yet to find conclusive proof of anything else out there in space crawling around eating and farting and dying like us. NASA has identified loads of planets which might support life, but the problem is they’re all so far away that we’ll likely never be able to reach and analyze them - in our lifetimes, anyway. Unless we hurry up and get that immortality thing together.

In more promising news, a team of NASA scientists has just published a study claiming that the closest known exoplanet, Proxima Centauri b, just might possibly be able to support life. The planet, also called Proxima b or Alpha Centauri Cb, lies just 4.2 light-years away from Earth in the constellation of Centaurus. That’s only 40 trillion kilometers, or 25 trillion miles, the cosmic equivalent of a stone’s throw.

Proxima b orbits the star Proxima Centauri and is roughly the size of Earth. For some time, astronomers have thought the planet to be uninhabitable due to the fact that it experiences extreme solar flares and radiation from its nearby star. However, the scientists behind this most recent study believe there could be scenarios in which Proxima b could still support life.

For example, if the planet happens to be tidally locked, meaning the same side faces its host star as it orbits, then surface water could allow for enough heat exchange between the hot and cold sides to support life throughout the whole planet. “An ocean-covered Proxima b could have a much broader area of surface liquid water but at much colder temperatures than previously suggested,” the authors write, adding that “Proxima b could be an inhabited, mostly open ocean planet with halophilic life.” 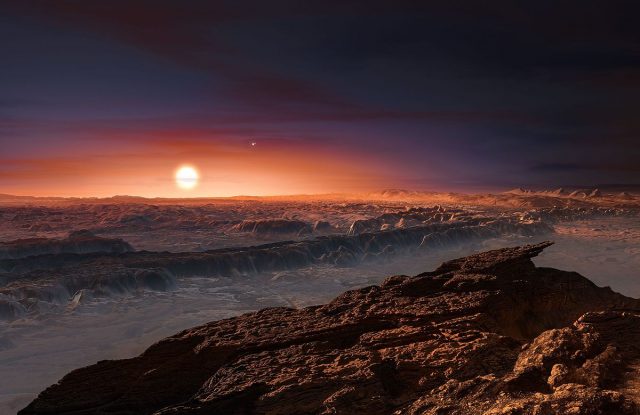 Another scenario could be that the planet formed much farther away from Proxima Centauri and has been slowly getting closer throughout its history, meaning some of the planet may still be habitable. UniverseToday has a good breakdown of all of these hypothetical scenarios and an interview with Anthony D. Del Genio of NASA’s Goddard Institute for Space Studies concerning this new research.

It’s important to note, though, that all of these scenarios are hypothetical and were produced through a new type of planetary simulation software used by NASA in their hunt for exoplanets. Could our nearest neighbor support life? How convenient would that be? Let’s hope we get that EM Drive worked out soon. I need to know.