It’s time for another edition of “What Could Possibly Go Wrong?” Today’s category: messing with the DNA of amphibians that are considered to be nature’s version of the canary in the coal mine. A doctor of biochemistry and biophysics from the University of Chicago is selling a do-it-yourself kit containing everything one needs to alter the DNA of a frog (frogs included) and potentially give it super strength and jumping ability. What could possibly go wrong? Will this go beyond inspiring a series of Frog Man movies (Attack of the Frog Man; Frog Man Takes Manhattan; Frog Leg vs. Bigfoot) and lead to real frog-human hybrids … or worse?

If the name on the box (we know you already ordered one – at $499 it’s a bargain even if it doesn’t work) sounds familiar, you’re up on your DIY Biohacker Hall of Fame. Dr. Josiah Zayner is the former NASA fellow and inventor of the Chromochord — the world’s first musical instrument based on engineered protein nanotechnology – who last year injected himself with a CRISPR tool programmed to attack his myostatin gene to increase his muscle growth. He’s still alive (although he doesn’t appear to have incredibly hulked up) and began selling a human biohacking Genetic Engineering Home Lab Kit (complete with human DNA) through his company, The Odin … until the FDA brought him down.

According to Bloomberg, after checking to see if the FDA cared about amphibians as much as humans (it doesn’t – frogs are a cold-blooded minor species not protected by the Animal Welfare Act), he switched over to green tree frogs (Hyla cinerea), After six months of testing, Zayner rolled out the Frog Genetic Engineering Kit Beta Test Version which, once your $499 payment clears and you complete a six-question online safety quiz (How often do you feed frogs? What temperature should the frogs be kept at? What are your thoughts on world domination through mutant amphibians? (OK, that last one’s not on the list … but it should be)). When the terrified UPS driver arrives, you’ll open a box containing six live green tree frogs, two cages, 1g Benzocaine anesthetic, live crickets, 10 syringes of 20ug DNA mixed with transfection reagent, 10 syringes of PBS and everything else one needs … except for instructions on how to take down a 10-foot-frog and the name of a good biohacker defense lawyer (maybe you’re supposed to biohack one?).

In his own tests, Zaynor gave frogs a DNA mixture containing IGF-1, a human growth factor, saw their weight increase on average increased by 23 percent and found the DNA in the frogs' livers, which indicated the frogs were reproducing it. Is that enough for a “Eureka!” moment?

“I don’t want to say I want to, like, take down the FDA, but we need to figure out a new model that works. There are a ton of people dying and suffering that don’t have access to the drugs they need. Something is going to have to break eventually, right? I don’t know when, and I don’t know what’s going to cause it, but maybe we can help push things forward.”

Zayner defends his DIY frog biohacking kit as a noble gesture to help humans frustrated with government bureaucracy, medical caution and lack of insurance learn how to modify the genes of frogs in hopes that they can someday modify their own … dots that until now have only been connected in sci-fi movies and TV shows. 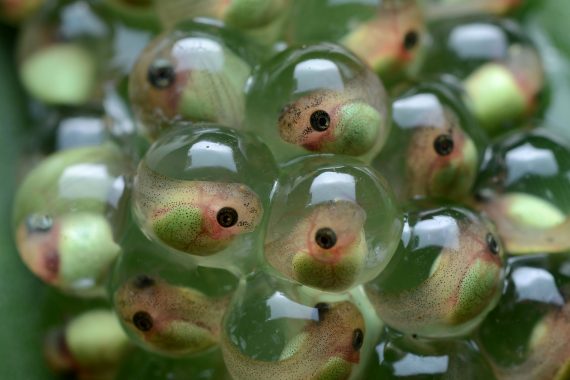 What could (or will or may already have) possibly go wrong?

Will one escaped modified tree frog eventually find a DIY human DNA biohacking kit and someday cause all of mankind to croak?