Strange Activity in a Crop Circle

As a follow-up to my earlier article on a potential connection between Mothman and the Crop Circle phenomenon, I thought I would share with you another strange story from Crop Circle maker, Matthew Williams. As I noted in the previous article, Matt is someone who openly admits to having made numerous, complex formations - primarily (but certainly not exclusively) in the fields of the county of Wiltshire, England. Matt, however, does not take the view that he is a straightforward hoaxer. Rather, he concludes that some form of presently unknown phenomenon deliberately interacts with the Circle makers, driving them to make the impressive formations that appear every year in the U.K.

Matt told me a very strange story of a remarkable incident that occurred in the summer of 1996. It all began just after he parked in his car atop Knap Hill, which is an ancient hill situated deep in the heart of Wiltshire’s Crop Circle country. Matt was looking down on what has become known as the East Field, a location where a number of intricate Crop Circle formations have appeared over the years, when: "I was sitting in the car about 9 o’clock at night, and suddenly saw this light that seemed to be coming from Adam’s Grave [a 196-foot-long, 19-foot-high, long-barrow with an ancient burial-chamber at its southeast end], which is on Walker’s Hill. I had all my equipment with me - cameras, night-scopes and binoculars – and so I jumped out of the car and focused on Adam’s Grave. It was a bright, moonlit night and Walker’s Hill was all lit up.

"Through the binoculars I could see a chap on top of it holding what seemed to be a torch. I could tell he was wearing what looked like either a long, dark coat or a black cloak. So, I then got my night-vision equipment for a better look and could see he was walking back and forwards on Adam’s Grave. Well, I watched him for a few minutes and then went back to the car to get some food. Then, about ten minutes later, I thought I’d take a look again."

It was at that point, as Matt revealed, that things became decidedly strange: "When I looked up again, I could see that there was a group of figures standing in a circle around this man. What was stranger was that I could only make out their shape, but not their clothing. And as I watched, they began what looked like a dance: a ritual dance like those of the Native American Indians. But the weird thing was that he was just stood there, and it was like he couldn’t even see them." 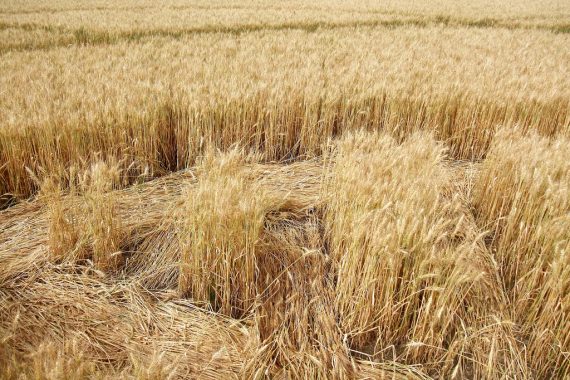 But that was nothing compared to what happened next, as Matt made very clear to me: "Whatever these creatures were, they suddenly began to shrink in size, to about the size of small children. They carried on doing this wild dance, like a ceremony; but what was odd was they seemed to glitter, particularly on their arms, like little globes of light flickering. I thought: What the hell are they? So, I packed the equipment back in the car, edged my way towards Adam’s Grave and hoped no-one could see me, and then sprinted the last bit to surprise them and see what was going on. But when I got there, the figures were gone and the chap was gone, too. The moon lit up the whole area, but there was no-one, nothing. I stood around for a while, searched out the whole area, and then went back to the car. There wasn’t really much more I could do."

Hurricane Florence Gets Scarier with Sightings of the Gray Man Ghost