The Haunted Hall of Dreams

Along the scenic coastline of Ireland there is a rural, isolated road that meanders by the seaside of the Hook Peninsula County, in Wexford. The road makes its way past windswept vistas and rugged rocks and cliffs ceaselessly pounded by the waves, presenting a rather breathtaking view, yet driving along further one will invariably see a rather surreal site looming in the distance. There not far from the craggy coast sits an enormous and very old country house that towers over the flat landscape around it, obviously once opulent but now appearing derelict and battered by age and the elements. This is the historic Loftus Hall, also sometimes referred to as the Hall of Dreams, a place infused with a tragic and at times violent and sinister history, and which has grown to acquire a reputation as being one of the most haunted places in the country.

The past of this place is rather colorful to say the least. There was a time long ago when this was a sacred land infused with magic and revered by Celtic druids, who used it for their rituals, and is also said to have once been a pagan sacrificial ground. For the druids this was a place of great power and magic, the realm of their legends and mysticism for thousands of years, but they eventually drifted away when the Normans took over the area and built an imposing castle right atop this sacred place in around 1180. This castle, then known as Houseland Castle, was erected by the Norman knight Raymond (Redmond) Fitzgerald, also known as Raymond Le Gros (Raymond "The Fat") shortly after moving into the peninsula. From there the castle would gradually become a decrepit ruin until Fitzgerald’s descendants rebuilt it in 1350, in an era when the Black Death was menacing the land to bring death to all in its wake, calling it Redmond Hall. It is from here that the history really becomes interesting.

In the 1600s the Irish Confederate War broke out, and the castle would be repeatedly subject to attack by English forces, with the Redmonds proving to be able to tenaciously defend it at all costs. One famous story is that of the valiant fight of 68-year-old Alexander Redmond, who managed to fend of around 100 troops with just his resourcefulness and the help of his two sons and some tenants, killing most of the enemies and capturing and executing the rest. They would continue to successfully defend the castle, but as heroic as these deeds were, the hall eventually fell to the English and was confiscated. In 1666 the hall would fall into the hands of the prestigious Loftus family, and would be renamed Loftus Hall.

From between 1870 and 1879, the increasingly powerful and illustrious family went about a complete renovation and overhaul of the place, sparing no expense to make it a residence worthy of a visit from Queen Victoria herself, who they hoped to woo there with its granduer. The hall became even more opulent than it had ever been before, decked out with marble and mosaic tiled floors, tapestries, ornate staircases, the works, and although the Queen never did see it Loftus Hall became known as one of the most luxurious residences in all of Ireland. The house would eventually fall into disrepair once more, and later sold to the Benedictines, who turned it into a convent and girl's school called the Convent of St. Mary’s in 1917, who would in turn pass it on to the Sisters of Providence of the Rosminian Order in 1937.

The hall was then eventually abandoned yet again and stood there alone, isolated, and uninhabited for decades, only finally being sold in 1983 to a man named Michael Deveraux, who made it into the “Loftus Hall Hotel.” This would not last long, as Deveraux would die not long after, and his wife would then mysteriously vanish for no appatrent reason. The house stood unoccupied for several decades more, until it finally passed on to the Quigley family, who are its current owners and have turned it into a historic site open to the public.

Throughout all of this the hall remained abandoned and feral for long stretches of time, and one reason for this was that it has long been considered to be a cursed place brimming with the forces of evil, due to a persistent legend surrounding its halls that dates back to the 17th century. The story goes that in the year 1666 a caretaker named Charles Tottenham came to Loftus Hall along with his wife and daughter, Anne. One stormy night a ship is said to have crashed against the rocks at Hook Peninsula, after which a mysterious stranger made his way to the mansion through the lashing wind and rain. The Tottenham’s graciously let him in out of the storm and offered him shelter, and he would end up being there for several weeks while his battered ship was repaired, in the meantime making quick friends with Anne, with some versions of the account even saying they fell deeply in love.

According to the tale, one night the family and the mysterious stranger were playing cards in the Tapestry Room when Anne dropped one of her cards and bent down under the table to retrieve it. When she did so she purportedly noticed that the stranger’s feet were now cloven hooves, which caused to her to shoot upright and scream. The mystery man, now certain that she had found out his dark secret, then shot up straight into the air, smashing through the roof, in some versions transforming into fireball, and flying off into the night to never be seen again. Shortly after this, Anne is said to have gone stark raving mad and confined to one of the mansion’s rooms to her dying day. Interestingly, her grave was cemented over and sealed for reasons unknown. The hole that the Devil made in the ceiling is said to be irreparable to this day, always breaking again, and even in modern times it is said that this portion of the ceiling looks different than the rest. 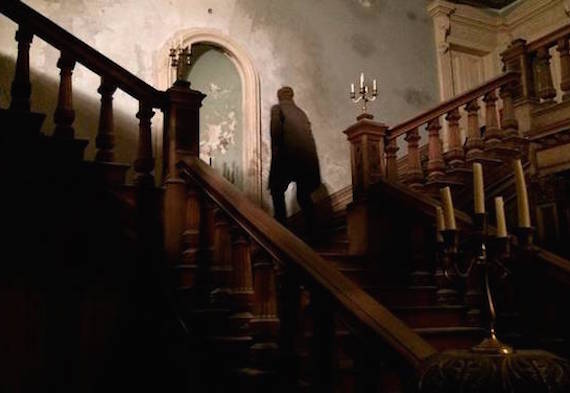 From the time of her death onwards, Loftus Hall became well known as being a haunt of the Devil, as well as an intensely haunted place in general, with the restless spirit of Anne said to prowl the estate. Indeed, the hall had such a reputation for being haunted that on many occasions Catholic and Protestant priests were brought in to exorcise it to no avail. The ghost of Anne Tottenham has remained active all the way up into the present, allegedly known for spooking visitors to the hall and photobombing pictures taken by people on the tours that pass through. There are also ghostly horses said to roam the grounds, as well as apparitions of long dead British soldiers and a dark shadow entity that some speculate is the Devil himself. Add to this the reports that the location was used by Satanists for dark rituals during its long periods of abandonment, and you get a place charged with a dark history, death, curses, and the Devil, and Loftus Hall is often mentioned as one of the most haunted places in Ireland.

It is partly these ominous tales that the locations remained unwanted and forgotten for such long periods of time. Of course with such a dark reputation the hall has become of interest to ghost hunters from all over the world, and one of these was the TV program Ghost Adventures, with Zak Bagans, Aaron Goodwin and Nick Groff. The team apparently ran into all sorts of paranormal activity at the hall, although it is all so dramatized and pervaded by theatrics that it is hard to know what veracity any of it has. It certainly seems that with its checkered past tinged with tragedy this place might keep spirits tethered to it, but there is very little we can do to untangle the myth from reality. Whether it is really haunted or not, Loftus Hall is certainly a place with an interesting past, and it maintains its haunted status to this day.