A Reddit post about a haunted bathroom in Hawaii caught my attention … yes, I lead that kind of exciting life. It detailed a ghostly encounter at a golf course on the Big Island with an invisible something that let loose a terrifying wail loud enough to chase a woman out of the restroom and caused her to drag her terrified (for a different reason) husband back into the bathroom to see and/or hear it for himself. Unusual? Believe it or not, bathrooms are haunted more often than you might expect. Is this where the expression about scaring the [email protected] out of you came from?

“There were 4 stalls, and only the second one was closed. I quickly glanced underneath that second stall to check if it was occupied. It was empty. All of a sudden I started hearing this wailing sound that progressively got louder as I got closer to the 3rd stall which I have decided to use. The sound got so loud and terrifying that I couldn’t do it and decided to bolt out of there. As soon as I turned around and started to run I heard something coming after me. I fumbled with the door a bit because I forgot it was a pull instead of a push. Once I finally turned out of the corner the footsteps behind me stopped. There was still no one there.” 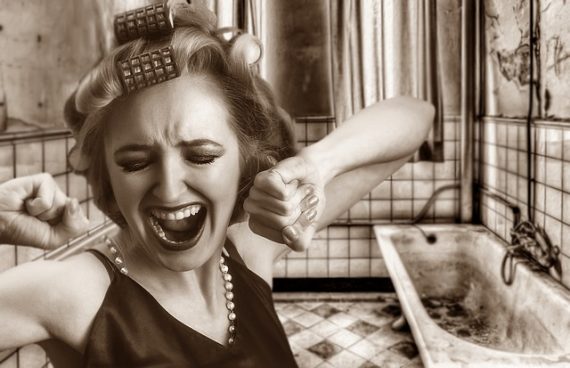 That Reddit account comes from “littleblubug” who said it occurred on September 17 of this year. While it was a well-told ghost story, many of the commenters were as disbelieving as her husband, who she forced to go with her into the ladies room, check the haunted stall (he saw and heard nothing other than what one normally hears in a restroom) and wait until she finished.

“If you have ever been to use the women’s restroom at the Mauna Lani golf course next to Shiono and had a similar experience, please let me know. I’m terrified about what the hell just happened and I’m wondering if I was just imagining things.”

While there don’t seem to be any other ghost stories from that particular loo, there are plenty of other haunted bathrooms around the world. One deadly encounter occurred in 2015 at the Bordanagar Government Primary School in Bangladesh where an 11-year-old girl became ill in a restroom and died a day later. When other children also became sick, officials believed a ghost that had haunted a tree outside was now indoors (do ghost do number two too?) and held a ritual to remove it. The bathrooms of Bangladesh seem to be boo-attractors – in 2013, women in garment factories in Gazipur were so terrified by ghosts in the restrooms that they began destroying them until management realized they couldn’t find replacements to work for the same [email protected] wages and exorcised the [email protected]

In the U.S., the historic Hotel Galvez in Galveston, Texas, has a ghost in the lobby’s ladies restroom that both guests and employees claim flushes toilets, turns on sinks, shakes stall doors and casts ominous shadows. It may also spend time in the hotel spa’s restroom where similar incidents have been reported. If you’re looking to meet up with celebrity ghosts, Arizona’s Oatman Hotel restrooms feature sightings of Clark Gable and Carole Lombard (they honeymooned there – what happened to make them want to haunt it?) and New York’s Chelsea Star Hotel has a haunted bathroom where Nancy Spungen, the girlfriend of Sex Pistols bassist Sid Vicious, died from a knife wound that Sid was suspected of inflicting (spoiler alert if you haven’t seen the movie – he died of an overdose before the trial).

While there are other good reasons to avoid some fast food restaurant restrooms, there are said to be ghosts flushing toilets and causing other mayhem in the bathrooms of a Pizza Hut (formerly a Jack in the Box) in Centereach, New York (someone died in it) and a McDonald’s in Cuero, Texas (it was formerly a gas station where a mechanic suspected of murdering his own child was mysteriously crushed by a lift). 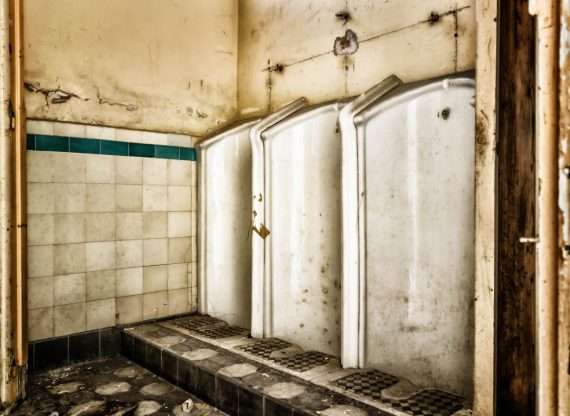 Still looking for reasons to go before you leave or hold it until you get home? The women’s restroom on the 86th floor of the Empire State Building in New York City is said to be haunted by the ghost of a woman who jumped off the building and the bathroom in the Dumfries House in East Ayrshire, Scotland, is haunted by the smelly ghost of an incontinent Earl of Dumfries.

There are plenty more. So, before you scoff at the lady who will no longer use the restroom at the Mauna Lani golf course, think about all of the strange and unexplained noises you’ve heard in them.