The Mysterious Exorcism of Martha Brossier

The idea of demonic possession has been around for awhile, and has managed to pervade many of our religions. The thought that we can be invaded, even taken over by mysterious forces beyond our understanding is a powerful one that seems lodged in our psyche. There has been much debate as to the veracity and reality of these possessions, discussions as to whether they represent true encounters with the supernatural, or if they are merely the ramblings and tantrums of troubled souls. One exorcism in particular has become notable for not only its bizarreness, but also how it shows the line between fantasy and reality upon which this phenomenon rests.

In the 16th century there was still much superstition in the world, and witches and demons were considered a very real, insidious threat that hung over humankind. Into this world of black magic and the Devil was born a French woman by the name of Martha Brossier, also often called Marthe Brossier. For her first 20 years there was not much remarkable about her, although she was considered to be a bit of an eccentric girl that her neighbors mostly avoided. This would change, however, when Martha was 20 years old, when one day the normally rather quiet girl bellowed forth with what witnesses described as the howl and course, fierce voice of a demon. Considering that this was 1576, there was immediate suspicion that some sort of witchcraft was involved, and they would find their scapegoat with Martha’s neighbor, Anne Chevreau, who was accused of casting a dark spell on the girl and was subsequently thrown in jail on suspicion of witchcraft.

However, this was by far the end of Martha’s spooky ordeal, and she would increasingly show signs that something was very wrong with her. Besides speaking in that low, violent voice, she also began displaying outbursts in which she would writhe, scream, contort her face and body into seemingly inhuman positions, roll her eyes back in her head, pant, groan, and growl like an animal. She would also allegedly stick her tongue out farther than any normal human, endure pinpricks without any reaction or apparent pain, speak with her mouth still shut, often in languages she didn’t know such as English and Greek, and display incredible feats of strength during these bizarre episodes. Most ominously she was purportedly able to leap across the room while lying on her back, and witnesses claimed that she would sometimes apparently be dragged across her bed or the floor by unseen hands. 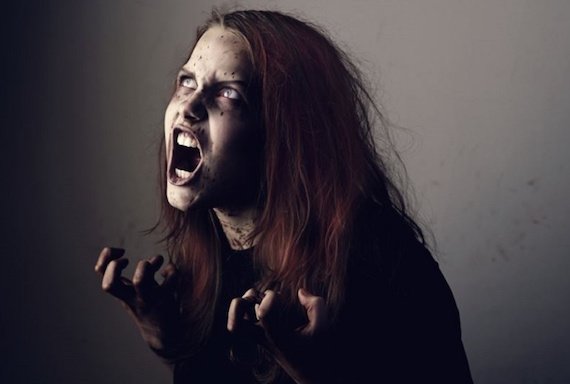 Word got out about Martha, and there were many rumors that she was possessed by a demon or even the Devil himself, yet oddly rather than being frightened her family actually took Martha on a sort of travelling tour. They would go from village to village to show the “possessed woman,” and Martha would dutifully get overtaken by the demon, convulsing, roaring, and doing all of her possessed episodes in front of throngs of macabre curiosity seekers. Considering that many of the symptoms of these outbursts, such as the speaking with the mouth shut, the elongated tongue, the intense contortions, and the superhuman leaping while lying down, seemed genuinely beyond human ability and therefore supernatural, she was widely believed to be the real deal, and the crowds that came to see this grim display grew ever larger. Before long she had gained quite a bit of notoriety, and she had become a minor celebrity in France.

These freakish displays and rumors made it all the way to King Henri IV, who ordered an exorcism carried out on the tormented girl. Martha was then brought to the Abbey of St. Geneuesu, where the Bishop of Paris was waiting for her along with the King’s personal physician Michel Marescot, who was quite skeptical of the whole thing from the beginning. For Marescot, this was a sort of experiment of sorts, a chance for his to see if there was any reality at all to the phenomenon of demonic possession, and in this sense this would be the first exorcism ever to be studied in quite this way. The results would remain controversial and much discussed right up to the present.

In order to test out his suspicions the physician had secretly swapped the piece of the true cross and the piece of wood that would be used to keep Martha from swallowing her tongue if she had one of her violent episodes. When Martha was brought into the abbey and confronted with the Bishop, she perhaps predictably almost immediately went into one of her violent tantrums. She shook and contorted and spewed forth all manner of vile and profane things at the priests in French, English, and Greek, in an ominous male voice that was not hers, and was barely able to be restrained, the supposed piece of the true cross shoved into her mouth. When she calmed down, a piece of what they thought was the true cross was put near her she recoiled in terror and apparent pain, cringing, crying, and writhing like an animal. To the Bishop this was more than enough proof that she was indeed possessed, but the skeptical Marescot was not as convinced, as the real piece of the cross was in her mouth, where it had had no effect, and she had recoiled from just an ordinary piece of wood. 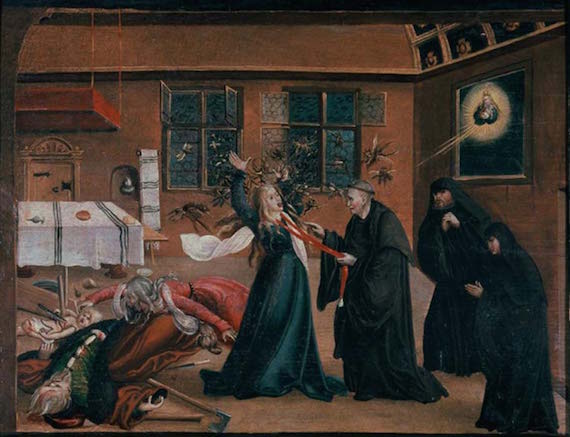 Merescot told the Bishop and other priests of what he had done, and suggested that Martha was not possessed, but simply very mentally troubled. To him this was proof that there was nothing demonic about this at all, but the Bishop was absolutely convinced that it indeed was a demon inhabiting the girl, and even went as far as to accuse the physician of blasphemy for even suggesting otherwise. Because of this, although Merescot was pretty sure that Martha was either a sham or insane, he had failed to convince the Church of this, and so the experiment at this stage was a bit of a failure.

Despite the dismissive attitude of the priests and Bishop of Paris, Merescot nevertheless did have allies in his convictions within the Church, even though he didn’t know it yet. The Archbishop of Lyon, Charles Miron, believed that the physician had been onto something, and he decided to continue the experiment himself, taking it even further yet. Miron came up with a way to test his suspicions by wrapping up a key in red silk and telling Martha it was a piece of the True Cross, and he also wanted to swap the Holy Water for normal water to see what would happen. To top it off, he would recite lines from Virgil’s Aeneid in Latin, which should be meaningless to a demon and had nothing to do with exorcism rites, but which a regular person might mistake for powerful scripture. The whole exorcism would essentially be fake. 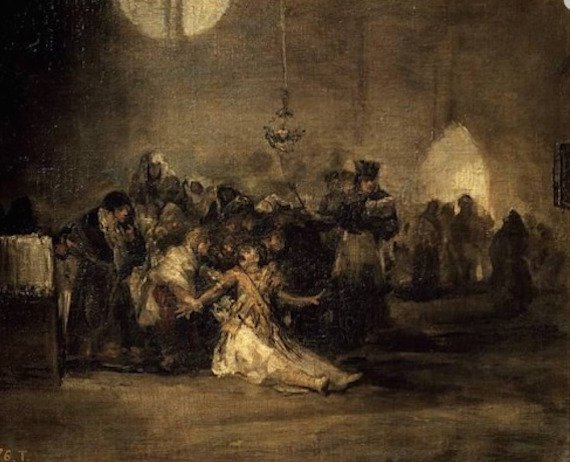 Martha was brought before Miron, and dutifully went into her spasmodic violent seizure. She was given holy water to drink unbeknownst to her, which she drank without incident, yet when confronted with regular water she has been told was holy water she screamed and said it burned her. She was then confronted with the “true cross” and recoiled in abject terror, doing the same when hearing the phrases from Virgil. Miron wondered, if this was truly a demon, then why did regular water burn it while holy water did nothing, a key in some silk cause it fear, and meaningless passages be taken as some sort of scripture? Now more than ever he was convinced that there was something else going on here besides dark supernatural forces. This was a groundbreaking achievement at the time because it was the first time a supposed demonic possession had been seemingly tested and exposed as a sham, and it showed that Brossier was either mentally unhinged or a scam artist. It was a remarkable achievement in an age when witches, demons, and magic were seen as very real indeed.

While this may seem to be the end of it, and that Martha Brossier was just a fraud and charlatan, or at the very least not totally mentally well, there continued to be controversy surrounding her case nevertheless. The thing is that there were numerous witnesses who had seen with their own eyes her weird episodes, and insisted that she did things that no normal human being could do, that it would have been impossible for her to fake it all. For her part, Brossier continued to claim that she was possessed, and still went on her tours up until her death. In the end we don't really know what happened with this troubled young woman. There is no way to really know if she was possessed by demons or just a sham. However, it remains a most interesting case in that it was one of the first of its kind to hold these unexplained mysteries up to scientific scrutiny, and whether we ever know what happened of not it is an intriguing historical oddity.

Near Perfectly Preserved Sphinx Discovered During Temple Restoration in Egypt