The Mysterious White Witch of Jamaica

It seems that every corner of the earth has its own strange tales of dark ghosts, evil magic, and tormented souls. These are stories that we are drawn to and which entrance us with their tragedy and glimpses into the supernatural. In Jamaica there is one such tale of an English woman who lived on a glorious plantation, a stranger in a strange land, but who also had a sinister secret. This is tragic and mysterious tale of witchcraft, Voodoo, and vengeful ghosts. This is the tale of the White Witch.

The tale begins with a place called Rose Hall Great House, also known as the Rose Hall Plantation or simply Rose Hall, located in Montego Bay, Jamaica. The residence is a magnificent and opulent mansion built in the 1770s in an ornate Georgian style, all decked out with fancy silk wallpaper and chandeliers, and sitting among what was once a sprawling sugar plantation originally owned by a John Palmer. Indeed this was once the largest sugar plantation in all of Jamaica, and of all of the plantation houses that once dotted the countryside Rose Hall is by far the most famous. Much of this has to do with the persistent dark legends surrounding it, and its ominous reputation as a haunted place.

The origins of what has become one of Jamaica’s greatest ghost stories is a woman named Annie Patterson, who by most accounts was born in Haiti to immigrant parents, with her father from England and her mother from Ireland, although other accounts have her arriving in the country from England when she was a child or that her parents died of Yellow Fever when she was just a young girl, but all in all variations she is said to have begun practicing the magical arts of Voodoo from an early age, versed in its mysterious ways by her Haitian nanny. Patterson is indeed said to have demonstrated a superb natural talent for Voodoo, and would continue to practice it throughout her life. This purported affinity for and powerful ability with black magic would be an important component in the building of her ominous legend later on in life.

When she was just 18 years old, Annie supposedly met the owner of the Rose Hall Plantation, John Palmer, and they would soon be married, after which she became Annie Palmer and moved off to Jamaica with him. Unfortunately, the honeymoon was apparently over rather quickly, and their relationship devolved into one of constant abuse and infidelity. Annie is said to have taken many lovers at this time, some of them slaves on that very plantation, and one day John allegedly walked in on her during one of these trysts. In his anger he beat her to within an inch of her life, but he did not know that she was a Voodoo practitioner, and he would soon end up dead by poisoning, by some accounts a Voodoo curse. Although it seems that this should have been suspicious Annie was never charged or investigated in the death, and indeed she went on to inherit the estate and plantation, instantly making her one of the richest, most influential women in the country.

Annie Palmer would marry again, on two more occasions in fact, and these husbands always had the oddest habit of coming down with a bad case of the deads. At around this time the slaves on the plantation, of which there were around 2,000, began to suspect her of being the Voodoo priestess she was. They also claimed that she had turned into a rather stern and cruel overlord of the plantation, meting out horrendous punishments and even executions for even minor infractions, and it was whispered that her male slave lovers who displeased her were doomed to be cursed with black magic. Before long she had garnered a new nickname among the slaves, who began calling her the White Witch of Rose Hall. For the most part her skill with the dark arts kept her safe and instilled fear, but unfortunately for her she was about to meet her match. 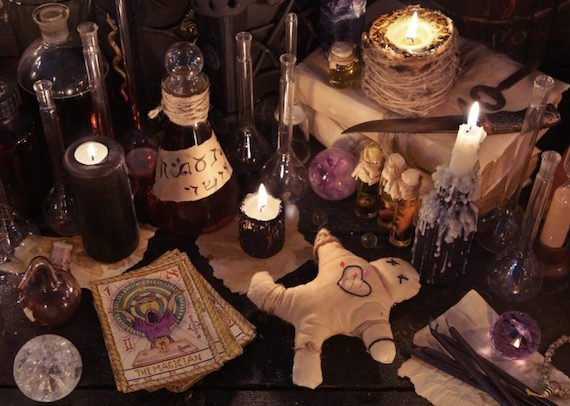 Annie’s downfall would come in the form of one of her slave lovers, named Takoo. According to the tale, he too had quite an affinity for Voodoo magic, and one of his family members was apparently targeted by Annie’s own Voodoo, incurring his wrath. He then supposedly used his own black magic to weaken Annie, after which he strangled her to death and placed her in a coffin ensconced by concrete and surrounded by magical spells to keep her spirit confined, with a binding ritual performed for good measure to make sure she couldn't roam the earth in death. However, it seems as if these precautions were not carried out correctly or that she was too powerful, because this would not be the last anyone saw of Annie Palmer.

In subsequent years Rose Hall would remain standing even through the slave uprisings and revolutions sweeping through Jamaica at the time, as the superstitious populace believed that to destroy it would free Annie’s vengeful spirit, and so the estate was left as it was, with many steering well clear of it. The house and estate would eventually be abandoned and fall into utter disrepair, and would accrue a reputation as being intensely haunted. Curious visitors would often report of being confronted by the White Witch herself, or of being plagued by all manner of paranormal phenomena. One of the main things reported is the sight of an apparition decked out in green velvet and riding a spectral steed, and the mansion itself is the home of all sorts of anomalous activity such as shadow figures, unexplained noises, screams, and others. This went on until at least into the 1960s, when former Miss USA, Michele Rollins bought the property and had it renovated, but the hauntings apparently persist.

Such a tragic story and tales of hauntings have helped to propel the status of Rose Hall as one of the most haunted places in Jamaica, but what truth is there to any of it? Some skeptics have pointed out that there was very possibly never anyone named Annie Palmer to begin with, and that this is all a legend born of a 1929 book written by Herbert de Lisser called The White Witch of Rosehall, which was a purely fictional tome using real Jamaican history as a basis and including elements of the myth of Annie Palmer. For these skeptics, Annie was at best perhaps based a real person, but widely exaggerated and mythologized into the stuff of legends. This skepticism has done nothing to stymie the pervasiveness of the legend, and it has indeed proven a boon for tourism to the site.

The Rose Hall Plantation is currently one of the most well preserved of Jamaica’s sugar plantations and estates from the old days, and is a tourist attraction that brings in droves of visitors. Many of them come for the history, but most of them have a grim fascination with the tale of the White Witch and the subsequent hauntings. This has become a must see for those looking for both a taste of Jamaican history and those wanting a view into one of the country's darkest and most sinister legends. Was the White Witch ever real, and is this place really plagued by her vengeful ghost? No one really knows for sure, but it is certainly worth a visit if you are ever in the area.