The Mystery of the Emerald Tablet

Throughout human history there have been those mysterious books, artifacts and relics said to hold some sort of vast powers or mystical knowledge. History is steeped in such tales, and there have been many who have spent their whole lives trying to find these lost artifacts. One such item that has managed to elude clear understanding is an ancient text etched upon stone, which would go on to become one of the most influential manuscripts on the practice of alchemy and a basis for much occult knowledge, but which remains buried in the mists of time. It is an item of alleged great power, holding secrets of magic, alchemy, the human mind, and possibly even the universe itself.

One of the cornerstones of early alchemy was a mysterious tablet said to contain a vast trove of secrets of magic and the universe and which would go on to become one of the most revered and sought after pieces of magical documentation in all of Western Occultism. Referred to variously as the Smaragdine Table, Tabula Smaragdina, or more commonly simply the Emerald Tablet, this elusive object is said to be one or even a series of rectangular green plaques, onto which are etched various symbols and inscriptions that spell out all manner of magical knowledge, in particular having to do with alchemy and the transmutation of matter from one form to another, as well as the method for creating the legendary Philosopher’s Stone and for manipulating the very matter of the universe itself. It is even said to hold the secrets to transforming one’s own consciousness and attaining a sort of enhanced conscious state and enlightenment. 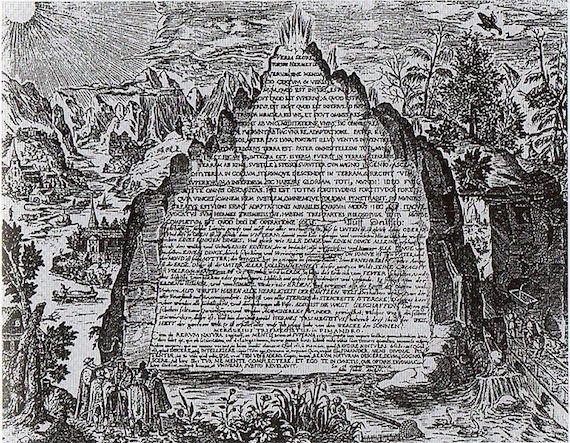 While the appearance and the secrets contained within are mostly agreed upon, the tablet has a murky history wreathed in the unknown, which has obfuscated its true origins and author. The most commonly cited version has it that the tablet was originally written by the father of Hermetic magic and alchemy himself, the legendary 5th century philosopher and priest Hermes Trismegistus, back in ancient Greece. Hermes supposedly wrote the Hermetic Corpus, a series of sacred texts that are the basis of Hermeticism, and the Emerald Tablet is said to have been his masterpiece. Other myriad theories include that the tablet was written by the son of the biblical Adam and Eve, Seth, that it was discovered clutched in the priest’s dead hands in a tomb under the statue of Hermes in Tyan in the 8th century by an Arabic mage named Balinas, that it was unearthed by Alexander that Great in an Egyptian tomb, or even that it was created by Thoth, the king priest of Atlantis a full 38,000 years ago.

Whatever the case may be, legends flock to and surround the tablet and where it went off to. One common tale is that it was buried under the Pyramids in Egypt, while others claim it was sequestered away within the Ark of the Covenant or that is was returned to the buried ruins of Atlantis. With so many legends and myths spiraling about the Emerald Tablet, it is hard to say who wrote it or when, or where it is now. What is known is that it was first translated into Latin by Hugo von Santalla in the 12th century, and that at least in this version Hermes Trismegistus is credited as the author. It is also known that the alleged writings upon it were highly influential in alchemy at the time, and this makes it all the more curious that no evidence of the actual physical existence of the lost tablet has ever been uncovered. We only know of it from written accounts and various translations, and some of these were from highly influential people, including Roger Bacon, Michael Maier, Aleister Crowley, Albertus Magnus, Eric John Holmyard, Julius Ruska, and Carl Jung, who claimed to have been visited by the tablet in his dreams.

None of these translations is exactly the same and may or may not be based on what was actually written on the physical tablet, and further complicating matters is the fact that interpretations of what is written vary from writer to writer. Perhaps the most well-known and intriguing of the various translations and commentaries on the Emerald Tablet was penned by none other than the English scientist, mathematician, astronomer, theologian, and philosopher Sir Isaac Newton, who actually wrote a surprising amount of work on the subject of alchemy. Newton allegedly spent much time working with the text of the tablet, and managed to produce one of the more famous translated sections, which reads:

Tis true without lying, certain and most true.

The Sun is its father, the moon its mother, the wind hath carried it in its belly, the earth is its nurse.

The father of all perfection in the whole world is here.

Its force or power is entire if it be converted into earth.

Separate thou the earth from the fire, the subtle from the gross sweetly with great industry.

It ascends from the earth to the heaven and again it descends to the earth and receives the force of things superior and inferior.

By this means you shall have the glory of the whole world and thereby all obscurity shall fly from you.

Its force is above all force. For it vanquishes every subtle thing and penetrates every solid thing.

So was the world created.

From this are and do come admirable adaptations whereof the means (or process) is here in this. Hence I am called Hermes Trismegist, having the three parts of the philosophy of the whole world

That which I have said of the operation of the Sun is accomplished and ended.

The meaning seems very open to interpretation, but Newton purportedly was very impressed by the knowledge and processes written of on the tablet, and it has been postulated that it could have even had an influence on his theories of the laws of motion and universal gravitation. He is also said to have believed that the tablet contained the literal recipe for creating the legendary Philosopher’s Stone, and that if one could comprehend the text and its intricate, arcane messages and geometrical patterns then they would acquire the ability to fashion the stone. Newton was by many accounts actually quite obsessed with the Philosopher’s Stone, writing much about it, and he believed the Emerald Tablet was the key. He also supposedly found within the text all manner of alchemical secrets, which he believed to be not merely symbolic, but that these were literal processes that could be carried out and performed in a laboratory setting. He would write of the tablet:

I am a skeptic by nature but I have no alternative than to offer subjective support to the claim that the Emerald Tablet has transformative properties. There are other things besides the transmutation of metals which none but they understand.

Did Newton gain any secrets from the tablet and did it indeed influence his work? No one really knows. It is all very intriguing, but in the end there is no certainty that any of those who have translated the tablet ever even saw the actual tablet themselves. It seems more likely that they worked with alleged transcripts of the original tablet, and that there is a very good chance that much of the information was changed or corrupted over time and through subsequent translations throughout history. There is also the possibility that this seemingly almost mythical tablet may have never even existed at all, that this is all merely a legend that has taken on a life of its own. Considering all of the conflicting and often confusing information on the Emerald Tablet, as well as the uncertainty over who actually supposedly wrote it or where it came from, we are left with very little that is concrete, and cannot adequately unravel the myth from any possible reality.

We are in the end left with many questions and few answers. Was there ever this mystical Emerald tablet upon which were emblazoned profound secrets of the universe? How did this come to be such a foundation for alchemy throughout history? Who wrote this and where did it go to? What exactly did it contain, and was it literal methods of alchemy and magic or merely symbolic? Did any of it actually work and if so, how? Did the tablet ever even exist at all? The possible answers to this historical enigma are varied, but we will likely not know until that mysterious green tablet is finally found, buried out there somewhere and lost to time.