If you've never done any research on the UFO topic, you might be forgiven for thinking that the only people who see them are hicks with worrying family trees; certainly this is the stereotype that has been perpetuated by Hollywood. In reality, however, UFOs are reported by men and women from all walks of life, and from all social and economic backgrounds: from burger-flippers to bankers, sex-workers to surgeons, pot-washers to politicians. With this in mind, it should could come as little surprise that those who spend their working days in the skies above us also see their fair share of anomalous aerial phenomena. Indeed, cases of pilot encounters with UFOs stand among the most credible and dramatic ever recorded in the history of this enduring enigma.

Here are five of the the most compelling... 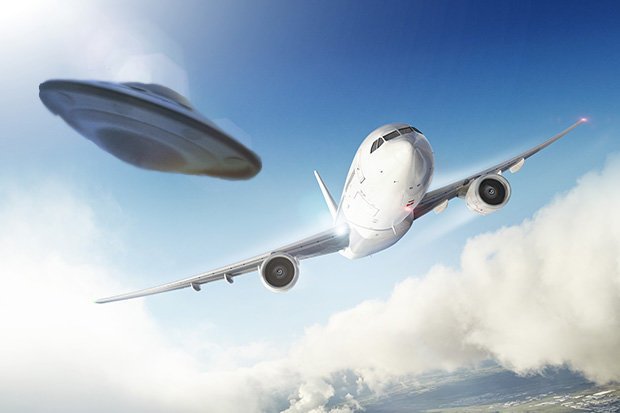 Captain Ray Bowyer got the fright of his life on 23 April 2007 while piloting a routine passenger flight from Southampton, England, to Alderney in the Channel Islands. Over a 15 minute period, he and his passengers witnessed two UFOs so large and imposing that Bowyer--a pilot with 18 years of flying experience--wanted nothing more than to land his aircraft as soon as humanly possible "and have a cup of tea." Typical Brit.

Bowyer's aircraft gradually converged on two stationary, cigar-shaped craft, each emitting a brilliant yellow light. To the naked eye, the objects appeared unnervingly large, despite initially being some 55 miles away, and Bowyer would later estimate that the two mystery craft were each up to a mile across. Bowyer also viewed the objects through 10X magnification binoculars, through which he could distinguish their seemingly solid form, which grew clearer still as his aircraft drew nearer to them.

I found myself astounded but curious, but at 12 miles' distance these objects were becoming uncomfortably large, and I was glad to descend and land the aircraft. Many of my passengers saw the objects as did the pilots of another aircraft, 25 miles further south [a plane near Sark, which confirmed the presence, general position and altitude of the first object from the opposite direction].

The encounter was thoroughly investigated but remains unexplained. Bowyer conservatively maintains that what he and his passengers witnessed was "definitely nothing from around these parts."

At around 12:30 EST on November 14, 2004, an operations officer aboard the guided missile cruiser USS Princeton contacted two airborne US Navy jet fighters from USS Nimitz, instructing the pilots to change their course and investigate an unidentified blip that was showing up on the Princeton's radar. The first fighter aircraft was piloted by Commander David Fravor, with his weapon systems officer in the back seat. The second jet was piloted by Commander Jim Slaight.

The weather conditions that day were near perfect: blue sky, no cloud cover, calm sea. When the jet fighters--both FA-18F Super Hornets--arrived at the site of the radar blip, the crew of four could see nothing untoward in the air. Below them, however, on the surface of the sea, they noticed an area "the size of a Boeing 737 airplane with a smoother area of lighter color at the center," as if the waves were breaking over a large object just under the surface. Moments later, the crew noticed a strange object hovering erratically some 50 feet above the disturbance in the water. Both pilots later described the unidentified object as resembling a large bright white "Tic Tac" between 30 and 46 feet in length, with no visible engine or exhaust plume.

As Commander Fravor started a circular descent towards the object, it began ascending along a curved path, keeping a safe distance from the F-18 and mirroring its trajectory. Fravor then attempted to plunge his fighter below the object. No chance. The UFO accelerated "like a bullet from a gun" and was lost from his sight in less than two seconds. The nature and origin of the object remain a mystery (at least officially).

On 7 January 1948, Captain Thomas Mantell, a 25 year old Kentucky Air National Guard Pilot, died while in pursuit of an Unidentified Flying Object. Mantell, who was honored with the Distinguished Flying Cross for his part in the Battle of Normandy, was one of four pilots ordered by the 156th Fighter Squadron to investigate UFO reports coming in to a number of military bases in Kentucky that afternoon, including Goldman Field at Fort Knox and Clinton County Army Airfield. The UFO was reported by military personnel as being up to 300 ft. in diameter, and white with a red border at the bottom.

The pilots, who were in radio communication with the control tower at Fort Knox, were ordered to approach the object, but it was now at a considerable altitude and appeared as little more than a dot in the sky. The pilots were then advised to break off direct pursuit and to level their altitude, a suggestion ignored by Mantell, who continued to climb in chase of the object. As Mantell got closer to the UFO, he told the control tower it looked "metallic," and was of "tremendous size." They would be some of his last words. It is thought that he blacked out soon after due to lack of oxygen. His plane spiralled to the ground, crashing on a farm south of Franklin, Kentucky. The cause of Mantell’s crash as listed by the Air Force officially remains "undetermined."

Yet another aircraft would be lost in an apparent UFO encounter in 1978. On October 21, at 7:12 pm, 20-year-old Frederick Valentich and the Cessna 182L light aircraft he was piloting mysteriously vanished over Australia’s Bass Strait. Shortly prior to his disappearance Valentich had advised Melbourne air traffic control that he was being orbited by a large craft some 300 meters above him. Valentich said the craft was long, with a shiny metal surface and a green light on it. He reported that the craft was approaching him from the Southwest. Moments later, the young pilot made what would be his final statement to air traffic control – or to anyone: “[the] strange aircraft is hovering on top of me again. It is hovering and it’s not an aircraft.” This was followed by 17 seconds of “metallic scraping sounds.” No trace of Valentich or his aircraft was ever found. The cause of his disappearance remains undetermined.

This case, involving a Japanese Airlines Boeing 747 cargo plane en route from Paris to Tokyo, is arguably the most compelling example to date of an aircraft coming dangerously close to airborne technological objects seemingly not of terrestrial origin.

On November 17, 1986, at 5.11 pm local time, while flying at 35,000 feet over northeastern Alaska, veteran pilot Captain Kenju Terauchi, along with his first officer and flight engineer, noticed unusual lights some 2000 feet below and to the left of their 747. After a few minutes, the lights changed their position and suddenly appeared directly in front of the aircraft, and at much closer proximity—so close, in fact, that they lit up the cockpit and Terauchi said he could feel heat on his face. They now resembled two pairs of squarish arrays of pulsating “amber and whitish” lights. The captain estimated them to be “about the same size as the body of a DC-8 jet.” The objects then positioned themselves side-by-side.

Terauchi asked Anchorage flight control if it was tracking any objects near the aircraft. Negative. Terauchi would later note that his communication with flight control was garbled for several minutes, seemingly due to interference on the part of the UFOs. As the mysterious objects moved off to the left, the pilot sighted a third UFO some eight miles away; the aircraft’s radar detected it too, and it remained onscreen for several minutes. It was big—very big—and the smaller two objects were flying towards it. As Terauchi and co. looked behind them, they could see in the distance the “silhouette of a giant spaceship,” which was reflecting the lights from the ground. Terauchi would later refer to this immense Saturn-shaped object as the “mothership” and estimated it to be the size of “two aircraft carriers.” It remained behind them as the captain radioed Anchorage requesting permission to take evasive manoeuvres. Permission was granted, but the huge UFO held its position.

Meanwhile, Anchorage flight control had been in touch with the Air Force at Elmendorf Regional Operational Control Center to see if they were tracking anything anomalous—they were, but by 5.28 it had gone. At 5.40, Anchorage asked Terauchi if he would like to have jets scrambled to intercept, but he declined, fearing for the safety of the fighter pilots.

After a terrifying 30 minutes, Terauchi and his crew finally lost sight of the UFOs and landed his 747 safely at Anchorage, whereupon an investigation was launched by the FAA, which concluded that it could not confirm the event and that a split radar return was involved. Meanwhile, the debunking group CSICOP concluded that Captain and crew had simply misidentified the planets Jupiter and Mars. Years later, John Callahan, former Division Chief for Accidents and Investigations branch of the FAA, testified publicly to his first-hand knowledge of a CIA cover-up of flight data relating to this event.

Addicted to Opioids? Try Letting a Cobra Bite Your Tongue