Triangular UFOs: A Vivid Account of a Mystery Aircraft Over the Carolinas

There are a number of curious reports of unusual aircraft that have appeared over the years, some of which at least appear to indicate the presence of secret aviation projects that remain unknown to the general public. Unknown to us, that is, except for eyewitness reports that occur from time to time, which provide perplexing descriptions of these unusual, sometimes very large, and silent aircraft.

In fact, at one time the Federation of American Scientists (FAS) kept an eye out for reports of such "mystery aircraft." What follows is a general description of one of the most popular varieties, as featured on the FAS website:

"A very intriguing aircraft was being reported in the late 1980s. Some observers claim to have witnessed a vast black flying wing, estimated at between 600 and 800 feet in width, passing silently over city streets in California. The craft moved so slowly one observer claimed that he could jog along with it. The aircraft reportedly executed bizarre maneuvers in which it stopped, rotated in place and hovered vertically, pointing its thin trailing edge toward the ground. This vehicle's unlikely gyrations suggest that it is distinct from the other sightings, and could be a lighter-than-air craft pushed by slow- turning propellers."

I have collected a number of reports from witnesses over the years that have claimed to see this aircraft, or at very least, one that is similar in its description and flight capabilities. On one occasion a number of years ago, I was filling in for the host of a Saturday night radio program in that used to air in my hometown of Asheville, North Carolina, when we received a live call-in from a gentleman named Brian, who shared a very vivid recollection of seeing this aircraft himself in 1988. 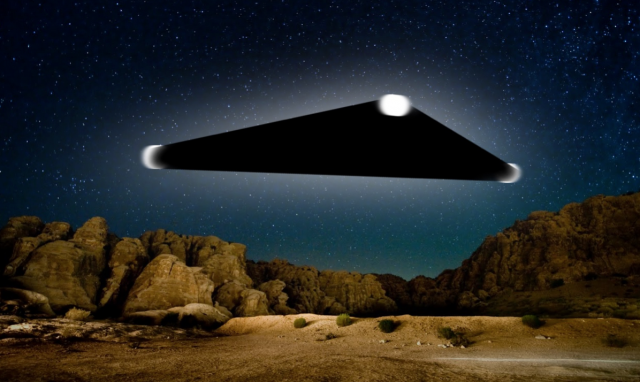 When Brian called into the program, he told us about having recently watched a television program on History Channel that recounted people's experiences seeing large, silent triangular aircraft, which had prompted him to call in and share his own experience. "They were talking about that triangle shaped object that moves at snail-speed. My cousin and I witnessed that on a July night in 1988. It came straight over the mountain, just as slow and made absolutely no sound whatsoever," he told us.

"I had just moved back from Arizona, and I was living on a farm out in Fairview, North Carolina," Brian said. "My cousin had come over to have dinner with me. We grilled out and had some steaks. As he was getting ready to leave, and I was walking him out to his car, and we both looked up almost at the exact same instant."

"And this monolith, and I'm not talking about something the size of a Boeing 747, I'm talking about, like, five 747s - came straight over the top of Cedar Cliff Mountain."

"It was totally silent," Brian said, "but it had three or four distinctively different colored lights on it, and it just barely went over us. I got my binoculars out, and I even got my hunting rifle and looked at it through my scope. And he and I stood there in total silence, for ten minutes watching this thing slowly move down 74, across where Reynolds High School is, across a little mountain range right there across the Parkway."

"It never changed altitude. We just stood there, and we were looking at each other like, did we just see this?"

Brian told us his cousin tried to call the Asheville Regional Airport and report the observation shortly afterward but said that "they just laughed him off."

"This thing was humongous," Brian said, still sounding very much in awe of what he had seen many decades ago.

Above: Footage of a purported triangular aircraft, dated March 14, 2008, similar to the description given by "Brian" outlined above.

Of course, Brian's recollection of the object he and his cousin witnessed in 1988 is not the only one of its kind; it is very similar to other reports from over the years which describe these large, slow-moving triangular aircraft. Arguably, some of the best historical research into appearances of this unusual aircraft have been provided by researcher David Marler, who documents his inquiries into these objects in his book Triangular UFOs: An Estimate of the Situation.

In the early 2000s the National Institute for Discovery Science (NIDS), a scientific investigative group founded by aerospace entrepreneur Robert Bigelow, began studying and collecting information on incident reports involving the "triangles." In the estimation of NIDS researchers, there were at least some correlations between triangle sightings and known flight corridors used by the U.S. Air Force:

“NIDS has followed up on their study of last year that correlated sightings of large triangular or delta-shaped objects with Air Force Materiel Command and Air Mobility Command bases throughout the United States. Matches were made suggesting flight paths in and out of certain base locations... the reports jibe with over 150 separate reports of sightings of large triangular or deltoid shaped objects. Those eyewitness accounts, accumulated by NIDS, have mainly come from the United States. A small number of the sightings they have on file come from Canada and Europe.”

Despite such inquiries about unidentified triangular aircraft over the years, at present, there is no information pertaining to these aircraft that has been made available by any government institution, which gives a clear indication about their origin or purpose.

Thus, apart from the scant photos that have emerged over the years, and myriad reports by eyewitnesses, the mystery surrounding the triangles endures... for now at least. Perhaps that won't always be the case, but despite the ambiguity surrounding various accounts that detail these alleged aircraft, they remain one of the most prevalent varieties of UFOs reported over North America and other parts of the world in modern times.