Alien Life May Be Purple

Prince would love this news. A new study claims that the first life on Earth may have been (get ready, Oprah!) the color purple and the same science behind this indicates that alien life forms, if they exist, could be a matching hue. Sorry all you greys, tall whites and green Reptilian fans! Might this be linked to the mysterious purple skies recently in Ohio and Florida?

Microbiologist Shiladitya DasSarma of the University of Maryland School of Medicine and postdoctoral researcher Edward Schwieterman at the University of California, Riverside, are the authors of the study published in the International Journal of Astrobiology with the self-explanatory title: “Early evolution of purple retinal pigments on Earth and implications for exoplanet biosignatures.” Their “Purple Earth” hypothesis is based on the proposition that the purple-pigmented molecule called retinal may have enabled early life forms to create energy from sunlight before they went green with chlorophyll and photosynthesis. 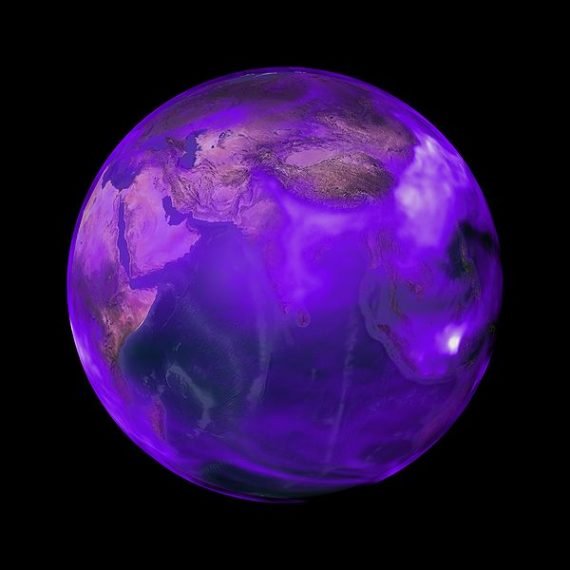 The key to the Purple Earth hypothesis is the Great Oxygenation Event which designates the planet’s atmospheric switch 2.4 billion years ago from carbon dioxide and methane to primarily oxygen. Prior to this, DasSarma and Schwieterman speculate that retinal, a purplish molecule that is simpler than chlorophyll, was the primary energy enabler, then retinal and chlorophyll existed together before chlorophyll and photosynthesis generated enough oxygen to convert the entire atmosphere over to one more suitable for green plants. If we could travel back to that time, we’d see that the plants were purple because retinal molecules absorb green and yellow light and emit a mix of blue and red light that appears purple.

If the Purple Earth hypothesis is true, then it could happen on other planets that may be similar to Earth. To find them, the study says that astronomers need to start looking for planets with a “green edge” -- since retinal reflects green infrared light – rather the “red edge” they currently seek because chlorophyll molecules reflect infrared red light. That would mean that any alien life utilizing retinal would be purple, including human-sized life forms. Can we deal with real Smurfs?

Did aliens have anything to do with the purple sky seen last week in northern Ohio and in Florida after Hurricane Michael? Videos of both show definite purple sky that’s more than just purple rain. Fortunately, local meteorologists calmed panicky skywatchers by explaining that there was nothing alien about it – the purple sky was the result of a phenomenon called scattering. A red sunset hits the blue sky and scatters the shorter blue wavelengths, creating purple – a color we should see every night but don’t because of the way our eyes adjust to different minor wavelengths.

Will our purple alien friends have the same problem? What color will they see us? Let’s hope it’s not the same as their favorite food.