An Unidentified Deep Space ‘Goblin’ and the Mysterious Planet X

Could there really be a hidden Planet X lurking on the far edge of our solar system? For years, astronomers around the world have been searching for the mysterious planet or whatever it may be, but so far very little definitive evidence has been collected. There are theories that the object is perhaps a rogue star hurtling through our solar system or even that Planet X is on a trajectory to collide with the Earth and split it in half, but you know how theories go. So far, all that’s definitively known is that the orbits of the outer planets and other objects at the edge of our solar system appear to be affected by something with significant mass, like a small planet. 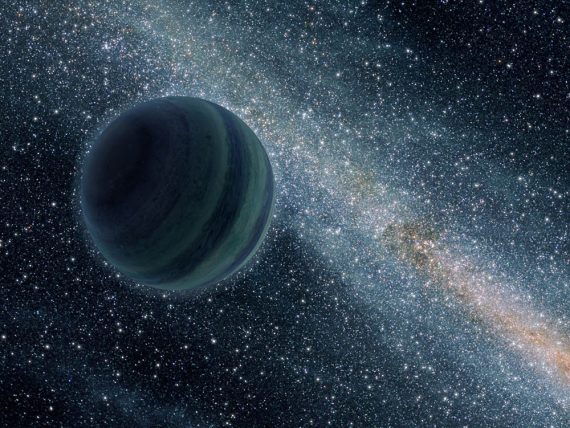 A new discovery announced this week adds to the growing gravitational evidence for Planet X: A small object with a diameter of 300 km (186 miles) has been found lurking at the farthest edges of our solar system with an orbit that suggests the existence of an undiscovered planet several times larger than Earth. Astronomers working with the Carnegie Institution for Science discovered the object, known technically as 2015 TG387, some 80 astronomical units (AU) from the Sun - two and a half times farther away from the Sun than Pluto. 2015 TG387, affectionately referred to as “The Goblin,” lies so far away that it’s difficult to even detect.

One of the astronomers behind the discovery, the University of Hawaii’s David Tholen, says that it’s possible that The Goblin has other neighbors, hard-to-see planetoids or dwarf planets which could be lying at the edge of our Solar System just beyond our ability to detect them:

We think there could be thousands of small bodies like 2015 TG387 out on the Solar System’s fringes, but their distance makes finding them very difficult. Currently we would only detect 2015 TG387 when it is near its closest approach to the Sun. For some 99 percent of its 40,000-year orbit, it would be too faint to see.

The official study of The Goblin has been submitted for publication in The Astronomical Journal. Chad Trujillo of Northern Arizona University adds that while The Goblin does seem to corroborate some of the other existing evidence for Planet X, it’s not the smoking gun we’re all waiting for - yet:

These simulations do not prove that there's another massive planet in our solar system, but they are further evidence that something big could be out there.

Let’s just hope it is another massive planet and not something far more sinister or mind-meltingly weird. Remember that ball of anti-lifeforce in The Fifth Element? Life imitates art sometimes.