Iconic horror/sci-fi director John Carpenter confirmed recently that remakes of any number of his classic movies could be on the table… just so long as a sizeable wad of cash is also placed on said table by the interested parties.

In a recent interview with Den of Geek, Carpenter was asked how he’d feel about seeing any titles from his impressive filmography being rebooted for a new generation. “I don’t know,” the director responded. “Let’s see the next proposal. I can’t do a blanket kind of, ‘Oh, okay. Yes, I’ll do that.’ I don’t know, but I’m up for almost anything that involves money. That’s a nice thing. It’s always nice.” 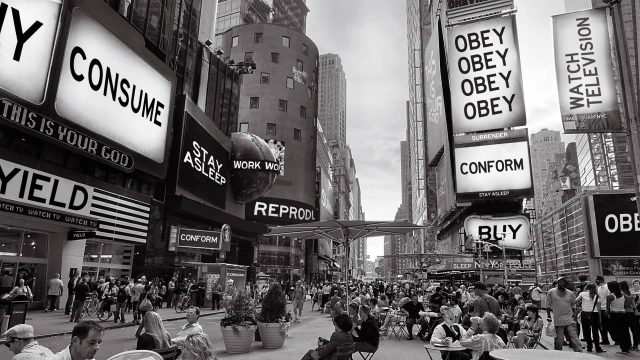 Intriguingly, however, when asked about his 1988 alien invasion movie, They Live, Carpenter was reluctant to reveal too much. A remake of his anti-consumerism cult-classic has been rumored to have been in development for years, but its status has been murky of late.

When asked by Den of Geek if there was any chance of a They Live sequel, Carpenter said, “Well, I’m not gonna tell you about that, because it might be closer to reality than you think.” The director then went on to say that a They Live sequel/reboot had been in the works written by Matt Reeves (Cloverfield, Dawn of the Planet of the Apes). “It was a feature film called ‘Resistance,’” said Carpenter. “But then he [Reeves] moved on, and so the sequel is, well, we’ll see. We’ll just have to see.”

Based on Ray Nelson’s 1963 short story Eight O’clock in the Morning, the original They Live follows a blue collar drifter (played by Roddy Piper) who finds a pair of sunglasses that allow him to see the stark reality of corporate America where shops are covered with subliminal signs that say “SUBMIT,” “STAY ASLEEP,” and “DO NOT QUESTION AUTHORITY.” The world is being secretly run in this Orwellian fashion by malevolent, skeletal-faced aliens who are allied with the US establishment – the human elite having been promised tickets off-planet when Doomsday arrives.

Unfortunately for Carpenter, his film’s searing political vision may have been a key contributing factor to its undoing at the box-office. They Live was pulled just two weeks after its 4 November 1988 release date. While Carpenter blamed audiences who “don’t want to be enlightened,” co-star Keith David had a more conspiratorial take on the film’s failure: “not that anybody’s being paranoid,” said the actor, “but it was interesting that They Live was number one at the box office… and suddenly you couldn’t see it anywhere – it was, like, snatched.”

One of Carpenter’s earlier sci-fis, the far gentler Starman, is also on the cards for a remake/sequel. It was reported back in 2016 that director Shawn Levy (Reel Steel, Stranger Things) had teamed up with producer Michael Douglas for a remake of the 1984 alien-themed romance. Little has been heard about the project since then, but Screen Rant recently noted that the Starman remake is indeed “moving forward” with Levy still attached to direct.

The star of Carpenter’s original movie, Jeff Bridges, told The Wrap’s Shoot This Now podcast earlier this month that he wants to reunite with Karen Allen for a Starman sequel (as opposed to a remake). Specifically, Bridges noted that a key plot point in the original movie, in which Starman uses his alien powers to impregnate the previously infertile Allen, is the perfect set-up for a sequel: “It’s all set up, very much like ‘Lebowski,’ like the Little Dude,” Bridges said during his interview. “The Dude in the oven. In ‘Starman,’ Karen Allen, she’s got a bun in the oven as well.”

In its coverage of Bridges’ interview, Screen Rant’s Dan Zinski writes: “It’s not hard to imagine a sequel set many decades later, with the child now grown up and learning about their alien origins, not unlike Superman.” But Zinski reckons it will take a “clever writer” to incorporate Bridges’ original character into a new story, given that his Starman has “already flown off to be with his own people and said he can never come back.”

During the same interview, Bridges also mentioned that he was aware of Shawn Levy’s Starman remake in the pipeline, but the actor said no one has contacted him about being involved. The Wrap later contacted Levy about Bridges’ remarks, and Levy responded with a statement clarifying that the remake is in its early writing stages, adding that he would personally do everything in his power to involve Bridges and Allen in the film if possible.

In Carpenter’s original Starman, Jeff Bridges’ benevolent alien crash-lands on Earth, finding himself stranded. Romance ensues as fate brings him to an attractive but lonely widow (Karen Allen) and the pair set off on a cross-country adventure to a site designated by Starman’s people for his heart-rending return to the stars. Inoffensive, but ultimately uninspired, Carpenter’s film sought to capitalize on the popularity of the emerging image of the alien as savior, and, fittingly, his Starman performs all manner of ‘miracles’ during his time on earth, including seeding his infertile lover with a star child (who, we are told, will be a “teacher”), and twice bringing the dead back to life (though he stops just short of turning water into wine). The movie was only a moderate success upon its release in 1984, but has gained a dedicated following over the years.

It seems likely that sequels to (or remakes of) They Live and Starman will eventually be produced. Judging by the pace of their progress through the Hollywood machine, though, it’s possible that NASA may have announced the discovery of real extraterrestrial life by the time Carpenter’s aliens make their return to our multiplexes.

Justin Bieber is Not a Reptilian, Says His Manager