Clowns to the Left of Me, Jokers to the Right: Strange Sightings on the Rise

Over the last two years, sightings of “creepy clowns” seem to have proliferated, terrifying children and adults alike while simultaneously baffling law enforcement. While the mythos surrounding creepy, evil, or dangerous clowns seem to date back at least a few centuries, pinning down a definitive origin for the creepy clown archetype has proven difficult for historians. After the 1978 arrest of serial killer John Wayne Gacy, the “Killer Clown,” modern pop culture took the evil clown character and run with it, spawning all sorts of tales like Stephen King’s It, characters like the Joker from the Batman canon, and even those weird soda spokesmen, Insane Clown Posse.

Of course, being Halloween season and all, creepy clown sightings are back on the rise. The phenomenon is likely just pranksters looking to make the local news and scare a few pesky pre-teens in the process, but who knows? Several incidents of clown figures seeming to become dangerous have some worried that the creepy clown craze might soon spill over into real-life ultraviolence.

Earlier this month, a figure wearing a clown half-mask, red wig, and colorful clown suit terrified two teenagers in the town of Sittingbourne in Kent, England. The clown reportedly threatened the boys with a bat while laughing maniacally, prompting police to investigate. Of course, nobody was found, with Sittingbourne police left only to state that “Inquiries to establish the circumstances around the incident remain ongoing.”

Farther north, a man in what has been described as a “killer clown mask” terrified a driver in Bolton, England as he seemingly attempted to break into her vehicle. The driver took to social media to recount her experience, warning other motorists to be on the lookout for clown carjackers in the area:

A guy got out and banged on my windows wearing a horror clown mask. Terrified is an understatement. He tried my door but I always lock them. The man wasn’t bright though and left a fabulous set of fingerprints on my window. We are okay and it’s been passed to the serious crime unit but please please be careful and lock yourselves in your cars.

In what seems to be the worst clown incident so far this year, a Dutch teenager was wounded attempting to flee another “killer clown.” The 16-year-old fell off of her scooter while fleeing “a guy in a scary clown mask,” leaving her with a broken arm and cheekbone, abrasions, and a serious concussion. The 26-year-old suspect was caught and while no charges will be filed by police, the girl’s family is seeking to press their own charges. As local police spokesperson told reporters it was merely a prank and “a very dumb thing to do.” 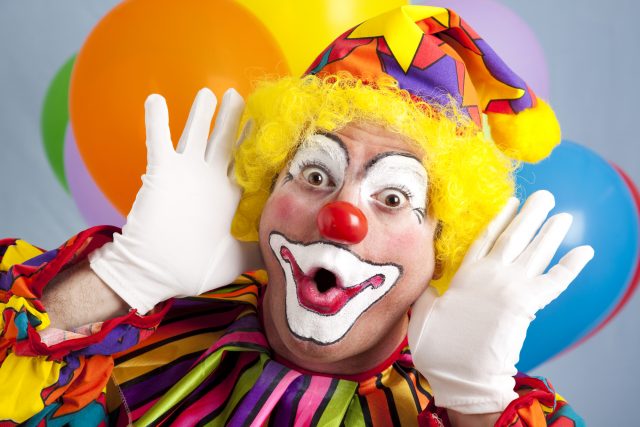 A more derivative form of the creepy clown prank appears to be afoot in Henrietta, New York, where several residents report a seemingly blood-smeared Joker playing card left in their mailboxes. The date “10/31” has been smeared in an unidentified red liquid on the cards. So far, there are no witnesses and no video evidence of whoever may be leaving the cards. Is this merely a harmless Halloween prank? In all likelihood, yes. Given that real physical harm has been caused, though, maybe it’s time to put the whole creepy clown thing to rest.

The Ghostly Case of the Great Amherst Mystery