What does one do when their haunted 200-year-old restaurant that has been closed for years due to flood damage but is still beloved by local historians, former patrons and current ghosts? If you’re the proprietors of the Chez Odette French restaurant in New Hope, Pennsylvania, you give it new hope by moving it 1,000 feet down the street and convert it into a haunted French museum and French boutique hotel. Attendre, quoi?

"It was the place to be. This just blows me away."

“It” is the three-story, 200-year-old Chez Odette and “this” is the site of it reinforced with steel beams, loaded onto 15 hydraulic dollies and moved from 274 S. Main St. to 274 S River Rd., its new and dry location. Local resident Kathleen Vorgang watched the stone building on its six-hour trip and reminisced on its history with The Inquirer, remembering wild New Year's Eve parties and nights at the piano bar in the 1970s. The building ended its trip intact, despite its age and condition. (Pictures of the restaurant on the road here.)

The original stone structure was built in 1784 as an inn and tavern, eventually becoming the River House. In 1960, it was purchased by French vaudeville actress Odette Myrtil, who moved to New Hope after a long musical theater career in New York. After managing The Playhouse Inn next door to the Bucks County Playhouse, she moved to the establishment she renamed Chez Odette and ran it until shortly before she died in 1978. The restaurant continued operation until ten years ago when flood damage from the nearby Delaware River and Canal shut it down. Investors purchased the historic building and spent years obtaining the proper permissions to move it. The site will then be turned into The Riverhouse at Odette’s, a complex featuring a 34-room boutique hotel, a 75-seat rooftop bar, a 200-seat ballroom, an 80-seat restaurant and a 50-seat deck overlooking the water. 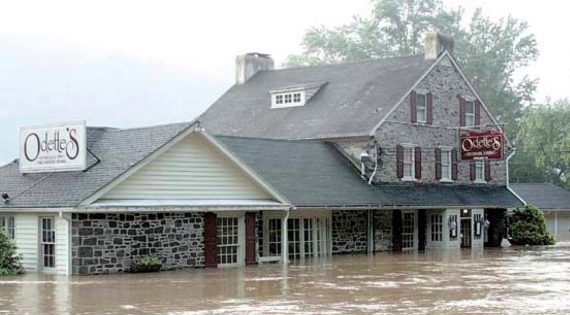 Where will the ghosts go?

According to the book “Dinner and Spirits: A Guide to America's Most Haunted Restaurants, Taverns, and Inns,” paranormal investigators felt a presence on the third floor and guests had heard their names being called out. A psychic couple identified the ghost as a woman who was murdered in the bar area and gets upset when someone sits in her favorite seat. The ghost of actor George C. Scott may have followed Odette Myrtil from the Bucks County Playhouse he is said to haunt. Then there’s the tragic story of pioneering female newscaster Jessica Savitch. On October 23, 1983, after having dinner at Chez Odette, Savitch and Martin Fischbein, vice president of the New York Post, missed an exit during a heavy rainstorm and drove off the road into the canal. Both were trapped in the car and drowned, as did Savitch's dog, Chewy. It’s said that Chewy haunts the site of their deaths near the restaurant.

Do ghosts stick with their paranormal residence if it’s moved? That would seem to make sense if they’re attached to events in the building rather than being buried beneath it. Chewy nay decide to roam a drier location. Then again, the new complex sounds pretty nice. Could the murdered ghost find happiness and peace in the new bar? Guests and patrons of The Riverhouse at Odette’s will find out in 2020 when it opens.

Move Over Ouija Board – the SoulPhone is Here