World records are meant to be broken. Some, like the world’s oldest living human, unfortunately are broken by death. That could be the case soon with the world’s oldest living organism, whose identity may be a surprise to many, as is the possible cause of its eventual demise. Replacements are already jockeying for position to take over the top spot and they’re equally unusual. Guinness, are you ready?

As described in a press release announcing a new study about it in the journal PLOS ONE, the world’s largest living creature is definitely large … if your money was on the puny-by-comparison blue whale, you lose. “Pando” (Latin for ‘I spread’) is the name of a grove of about 47,000 quaking aspen trees in the Fishlake National Forest in southern Utah. “Grove” is actually a misnomer – Pando is in reality a single underground plant with 47,000 genetically-identical stems sprouting upwards as high as 15 feet (4.5 meters) and covering 106 acres (0.42 square kilometers). While it’s estimated to be at least 80,000 years old, it was only in 1968 that researcher Burton V. Barnes determined that all of those plants were actually one. Despite this resilience and some more recent protective measures, further study has determined that Pando is dying. 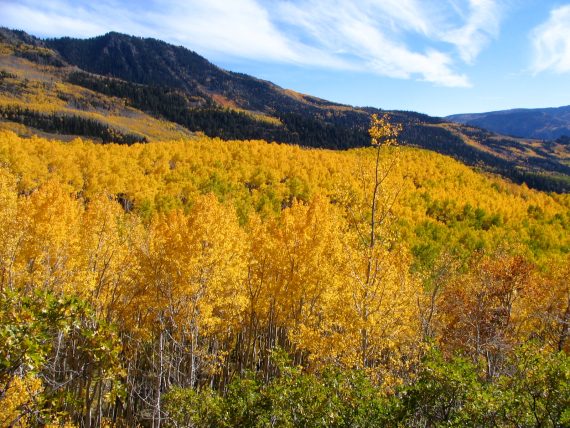 “After significant investment in protecting the iconic Pando clone, we were disappointed in this result. In particular, mule deer appear to be finding ways to enter through weak points in the fence or by jumping over the eight-foot barrier. While Pando has likely existed for thousands of years--we have no method of firmly fixing its' age--it is now collapsing on our watch."

Paul Rogers, Director of the Western Aspen Alliance and Adjunct Faculty member in USU's Wildland Resources Department, delivered the bad news in a study published in PLOS ONE. As stems die off naturally, an increased number of fence-hopping mule deer in the area are eating new sprouts before they can mature. The mule deer, along with local cattle that knock down the fences, have been so thorough that Rogers found some areas with no "young or middle-aged trees at all," just old, older and ancient trees.

As usual, behind most bad news is us. The abundance of mule deer was brought on by humans killing off their natural predators – grizzly bears and wolves. Some of the dead trees are due to developmental cutting, some to climate change. The end result is the same. While Rogers hopes that additional fencing and other forms of animal control will reverse the trend, he admits Pando could be gone in mere decades.

If that happens, what will take its place as the world’s largest living creature? Back off, blue whales – you’re still too puny. One candidate is the honey fungus of the species Armillaria ostoyae. The largest honey fungal colony covers 2,200 acres (8.9 square km) in the Malheur National Forest in the Blue Mountains of eastern Oregon. That makes it wider than Pando but it weighs a lot less (1.2 million lbs. to Pando’s 13 million lbs.) and is considerably younger at a mere 2,400 years.

A Posidonia oceanica or Neptune grass discovered in the Mediterranean near the Balearic Islands is about 8 km (5 mi) across and may be 100,000 years old, but has little mass for its size. For vertical mass, the giant sequoia (Sequoiadendron giganteum) can grow to a height of 85 meters (280 ft) and 7 m (23 ft) in diameter.

Which one will replace the Pando as the world’s largest living organism? Let’s hope none of them do.

UFOs and Mysterious Beach Findings Being Blamed on SpaceX