Just in time for the 400th anniversary of his execution by beheading, a painting hidden on a wall in the Tower of London has been uncovered and it may be a 400-year-old selfie of the tobacco-spreading, poetry-writing, conspiracy-leading explorer, Sir Walter Raleigh. Did Wally sketch himself as a brave adventurer, a sinister plotter or a sensitive poet? Was he smoking? 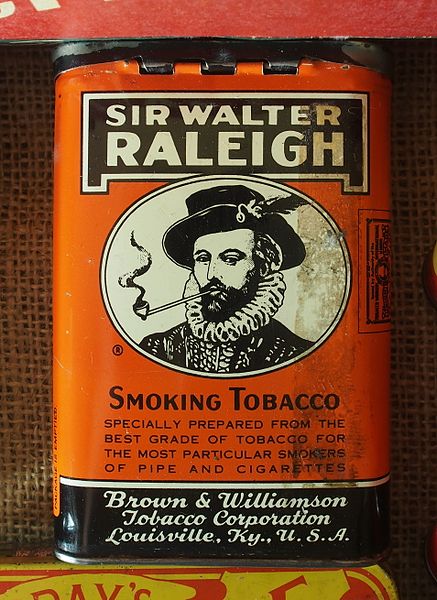 “It was painted on the base layer of that wall, which was installed while Raleigh was there.”

Besides being from the correct time period, Dr. Tracy Borman, the joint chief curator of Historic Royal Palaces (HRP) which oversees the Tower of London today, the portrait (see it here) resembles other paintings of Raleigh – showing his prominent nose and long face. The man in the sketch is wearing a laurel wreath, which, if it’s Raleigh, may signify his status as an aristocrat or a poet, or might possibly be a clipping from the garden he was allowed to tend during his longer incarceration in the Tower (he had two others).

The idea of white-collar prisons is not new, if Raleigh’s long stay in the Tower was any indication. Charged with treason in 1603 for plotting against James I, he was found guilty but spared a death sentence by the suddenly forgiving James I. Instead, he lived in the Tower until 1616, writing a long book (The Historie of the World), taking care of an herb garden and conceiving a son – his wife and servants were allowed to live with him. Raleigh was pardoned, led another expedition – to Venezuela to find El Dorado -- and was arrested again for actions that seemed to violate the terms of his pardon. Like a true poet, upon seeing the ax that would soon remove his head, Raleigh said:

"This is a sharp Medicine, but it is a Physician for all diseases and miseries."

While the Bloody Tower is one of the most studied of London’s many historic structures, The Daily Telegraph reports that the possible Raleigh selfie was embarrassingly discovered when a tourist rapped on the wall, knocking off a chip of paint and plaster which revealed to a wall-paintings specialist a black line from the sketch.

Is the sketch a self-portrait of the famous explorer, poet, writer and traitor? More study is needed to determine the identity of the face. In the meantime, it will undoubtedly become part of the displays (with proper protection this time) inside the Tower of London. Happy 400th, Sir Walter!

The Chupacabra: An Ongoing Phenomenon?