A new French film about alien abduction (among other things) was screened last week at the BFI London Film Festival. Directed by a man simply known as Quarxx, the film, All the Gods In the Sky, has yet to secure a distribution deal, but, when it does, audiences should be prepare to be disturbed. Apparently, it was inspired by a photograph of a boy who lay next to his dead sister for three weeks.

The official synopsis is as follows:

“30-year-old factory worker Simon lives a solitary existence on a decrepit farm in the remote French countryside. Devoting his time to caring for his sister Estelle, who was left severely disabled when a childhood game went horribly wrong, Simon is plagued by guilt and depression. But he sees a way out, looking to otherworldly forces as a means of liberating both himself and his sister from the corporeal prisons in which they are confined.”

Pretty vague. So where do aliens come into all of this?

In her review for SciFi Now, Katherine McLaughlin notes that the film’s protagonist, Simon (Jean-Luc Couchard), is “convinced he was abducted by aliens who are still trying to contact him.” These aliens are, we can infer, “all the gods in the sky,” of the title and are regarded by Simon as a force of potential salvation for he and his disabled sister who wish to be freed from the heavy shackles of their Earthly existence. 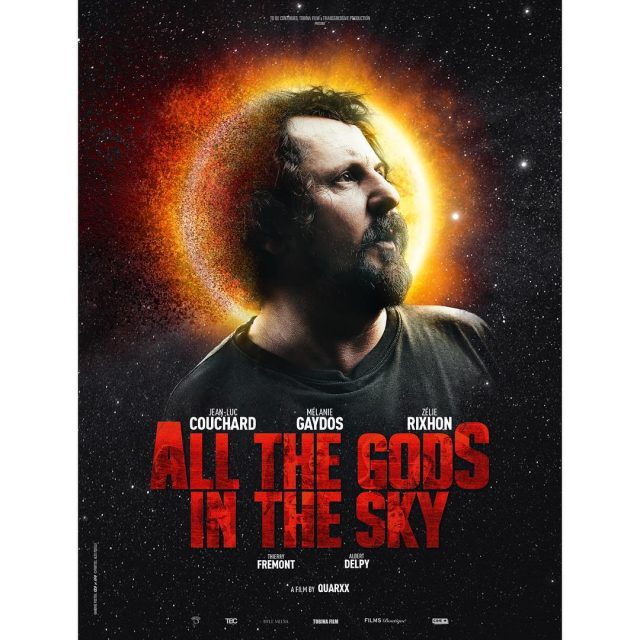 McLaughlin describes the film as “Genuinely bleak and upsetting in places [and] intent on both shocking audiences and inspiring awe.” Melanie Gaydos, in the role of Simon’s sister, Estelle, delivers a “superb and committed” debut film performance, writes McLaughlin in her review, and adds that first-time director Quarxx “ups the disorientation levels and adds wonder to all the melancholy, unpleasantness and despair with remarkable, otherworldly imagery.”

Ultimately, however, the weighty themes are spread a little too thin for McLaughlin’s tastes, as she concludes of the film:

“Touching upon trauma, the pressures of caring for someone, disability, poverty and stolen childhoods [and, yes, alien abduction] in an ambitious and imaginative way Quarxx occasionally reaches a bit too far. Some of the narrative threads feel a little undercooked and unnecessary even if they are affecting and visually intriguing.”

As previously stated, All the Gods In the Sky is yet to secure a distribution deal, but it seems likely that it will be available on some platform or another sometime in 2019. In the meantime, if you’re intrigued at the notion of UFOlogical themes being incorporated into an arthouse film, you should check out the brilliant Under the Skin, which I count among my favorite UFO movies.

Rise of the Apes — Gang of Monkeys Attacks Man With Bricks